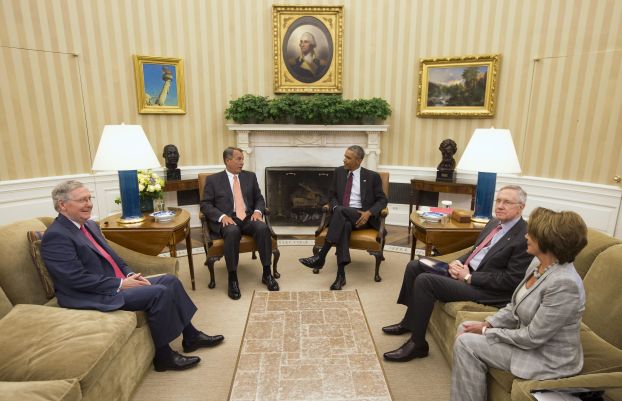 WASHINGTON (AP) — President Barack Obama will ask Congress to quickly authorize the arming and training of Syrian opposition forces but will press forward without formal sign-off from lawmakers on a broader military and political effort to combat militants in Syria and Iraq, administration officials said Tuesday.
Obama was to outline his plans Wednesday in a rare prime-time address to the nation, a format that underscores the seriousness of the threat posed by the Islamic State militants. The president’s broader strategy could include more wide-ranging airstrikes against targets in Iraq and possibly in Syria, and hinges on military and political commitments from allies in Europe, the Middle East and elsewhere.
Ahead of his address, the president huddled with congressional leaders at the White House. Following the hourlong discussion, the White House said Obama told lawmakers that he “has the authority he needs to take action” against the Islamic State militants but would still welcome action from Congress that would “aid the overall effort and demonstrate to the world that the United States is united in defeating the threat.”
Even before Obama’s meeting with Senate and House leaders Tuesday, some lawmakers suggested a congressional vote on the president’s plans was unlikely before the midterm elections in November.
“As a practical matter, I don’t really see the time that it would take to really get this out and have a full debate and discuss all the issues,” said Rep. Howard “Buck” McKeon, R-Calif., chairman of the House Armed Services Committee.
For Obama, a sustained U.S. intervention in the Middle East is at odds with the vision he had for the region when he ran for president on a pledge to end the war in Iraq, where the role of American fighting forces drew to a close nearly three years ago. The timing of his announcement Wednesday night was all the more striking, with Obama’s address to the nation scheduled just hours before anniversary commemorations of the terrorist attacks of Sept. 11, 2001.
Among the president’s most urgent priorities will be seeking authorization from Congress to arm more moderate elements of the opposition fighting Syrian President Bashar Assad. The president asked lawmakers earlier this year for a $500 million train-and-equip program, but the plan stalled on Capitol Hill.
With Obama ruling out sending U.S. ground troops into combat in Iraq or Syria, bolstering the capacity of the Iraqi security forces and Syrian opposition will be crucial to efforts to root out the militant group that has moved freely across the blurred border between the two countries. U.S. airstrikes could help give the forces in both countries the space to make gains against the Islamic State.
Administration officials said Obama sees a congressional authorization for a Syrian train-and-equip message as sending a strong signal to allies who are considering similar efforts. Secretary of State John Kerry was traveling to the region for discussions in Saudi Arabia and Jordan.
On Capitol Hill, there was little consensus on the scope of Obama’s authorities. While some lawmakers said the president has the authority he needs under the Constitution, others were seeking a more central congressional role in the effort.
“I think it is to his advantage and the country’s advantage to have Congress buy into that,” Senate Minority Leader Mitch McConnell, R-Ky., said before joining other Republican and Democratic leaders in the Oval Office Tuesday afternoon for a meeting with Obama.

None of the leaders spoke to reporters as they left the White House.
However, an aide to House Speaker John Boehner said the Ohio Republican expressed support for efforts to increase the effectiveness of the Iraqi security forces and for equipping the Syrian opposition. Boehner also said he would support the deployment of U.S. military personnel to Iraq in a training and advisory role and to “assist with lethal targeting” of Islamic State leadership, according to the aide, who spoke only on condition of anonymity to discuss the private meeting.
The U.S. is already launching airstrikes against Islamic State targets inside Iraq, a mission undertaken at the invitation of the Iraqi government and without formal authorization from Congress. But the scope of the mission has been relatively limited to strikes that help protect American interests in the region and prevent humanitarian crises.
U.S. officials said Obama is expected to loosen those limitations and open a broader counterterrorism campaign against the militants in Iraq. And following the group’s shocking beheading of two American journalists in Syria, Obama began more seriously considering extending strikes into Syria.

People who have spoken with Obama in recent days said it appeared likely he would take that step. At a private dinner Monday night with foreign policy experts, Obama emphasized the importance of viewing the Islamic State as one organization, not two groups separated by a border.
Administration officials and others familiar with Obama’s thinking spoke on condition of anonymity because they were not authorized to be named.
Obama’s spokesman has said the president is willing “to go wherever is necessary to strike those who are threatening Americans.” However, Obama has continued to rule out sending U.S. troops into ground combat operations in the Middle East.
In a shift for a war-weary nation, new polls suggest the American people would support a sustained air campaign. A Washington Post-ABC News poll released Monday showed 71 percent of Americans support airstrikes in Iraq, up from 54 percent just three weeks ago. And 65 percent say they support extending airstrikes into Syria.
Taking that latter step would raise legal and geopolitical issues that Obama has long sought to avoid, particularly without formal congressional authorization.
Unlike in Iraq, Obama would not be acting at the invitation of a host government. However, some international law experts say airstrikes could be justified as a matter of self-defense if Obama argues the Islamic State group poses a threat to the U.S. and its allies from inside Syria, whose government is unwilling or unable to stop it.
Another possibility: Although the U.S. has said it will not coordinate with Assad, his government could give back-channel consent to American strikes. The U.S. has a similar arrangement with the Pakistani military for U.S. drone strikes there, even though Pakistani officials publicly condemn the American actions.
Obama would still have to contend with the notion that American strikes against the Islamic State militants were actually helping Assad, who has overseen Syria’s bloody civil war. The U.S. has long called for Assad to leave power, and the Islamic State group is one of the groups inside Syria that is seeking to oust him.
———
Associated Press writers Donna Cassata, Bradley Klapper, David Espo, Alan Fram and Robert Burns contributed to this report.
———
Follow Julie Pace at http://twitter.com/jpaceDC