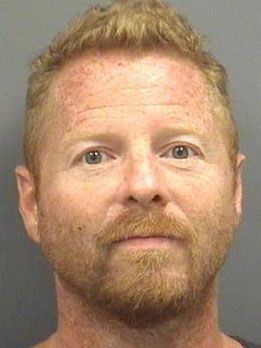 Michael Todd Collins, who was convicted of a 2002 armored car robbery in China Grove and sentenced to federal prison, has been arrested on felony drug and weapons charges.
The Rowan County Sheriff’s Office and the FBI joined for the investigation, which has resulted in federal firearms charges. Collins is now in federal custody, awaiting his first court appearance.
On June 22, the Salisbury Police Department assisted Highway Patrol in a vehicle stop at 325 E. Innes St. Collins was a passenger in a truck that was stopped by the Highway Patrol. Brandon Cochrane was the driver of the vehicle. During this vehicle stop, Collins was asked to step out of the truck, and a bag marijuana fell to the ground as he did.
Officers also found two marijuana pipes and a small amount of marijuana on Collins. Additional marijuana was discovered in the passenger side of the truck. A Remington .22-caliber rifle that was reported stolen was discovered behind the truck seat. Both Collins and Cochrane were arrested. Collins was charged with felony possession with intent to sell and deliver marijuana.
In early August, the Rowan County Sheriff’s Criminal Investigation Division began investigating complaints that Collins, 44, was a convicted felon, and had a large number of firearms. In January 2002, Collins was arrested by the Rowan County Sheriff’s Office and charged with felony robbery with a dangerous weapon that occurred on Jan. 8, 2002, during an armored car robbery in China Grove. This case was later taken to federal court and Collins was found guilty and sentenced to 104 months in federal prison.
During this recent investigation, detectives got a search warrant for Collins’ residence at 475 Collins Road, China Grove. During this search, Sheriff’s detectives seized more than 20 firearms, most of which were military type. Collins was not at home during the search. The FBI joined the investigation, which resulted in Collins’ arrest today near his China Grove home.

‘The Lego Movie’ on tap at City Park Friday…