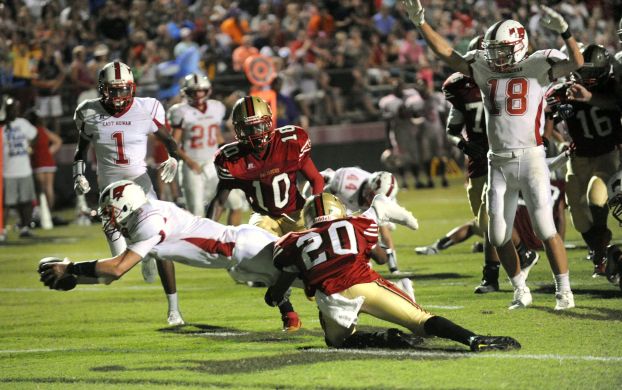 SALISBURY — East Rowan buried Salisbury under an avalanche of second quarter touchdowns Friday at Ludwig Stadium and handed their new head coach his first win in the process, 54-28.
Senior quarterback Sam Wyrick passed for 241 yards and five touchdowns to lead the lopsided win for the Mustangs (1-1). He added 79 yards on the ground and a rushing touchdown for good measure, doing most of the damage in the decisive first half.
“My linemen blocked an amazing game and gave me time to get my receivers open,” Wyrick said. “The receivers ran good routes and everybody did what they were supposed to do. It was a good win.”
It was also a first varsity win for new Mustang head coach Kenneth McClamrock after an opening loss at North Rowan.
“It feels good,” McClamrock said. “It kind of gets the monkey off your back.”
McClamrock noted it was a balanced effort on offense and defense that made the difference this week. The passing of Sam Wyrick, the receiving of Seth Wyrick and a better running game was important. But it was the Mustangs’ defense that set the tone early.
For the second week in a row Salisbury (0-2) found itself with a big deficit early and often. In the first half East Rowan forced three fumbles, picked off quarterback Riley Myers twice and blocked a punt that led to a score. It was all part of a five touchdown outburst in the second quarter that put the Mustangs up 47-7 by halftime.
The key sequence covered just 1 minute, 23 seconds on the game clock that began with a Sam Wyrick quarterback keeper for 13 yards and a score. On the next sequence, defensive lineman Robert Barringer, who already had a fumble recovery, leaped up to snag a Myers pass over the middle. He sprinted 19 yards for the first defensive score of his career. That made it 41-7 for East Rowan.
“It was great but I couldn’t do it without my defensive line and linebackers leading me down hill,” the 250-pound Barringer stated.
The final nail came on the next series when the Hornets fumbled at the East Rowan 39. It took one play for the Wyrick’s to connect on a 71-yard bomb down the middle and make the score 47-7.
Wyrick threw a pair of touchdown passes in the first period to Tre Gillespie to get the rout started. Seth Wyrick had two TD catches as well and Naquis Caldwell had one in the second half. Max Wall also scored for the winners on a short run.
“The negatives are outweighing the positives right now,” Hornets coach Ryan Crowder said.
The offensive highlight for Salisbury was Myers connecting with receiver Will Steinman on a pair of TD passes and another to Cameron Horne.

This is one of those freaky Fridays in which all eight of the football teams in the Post coverage area... read more