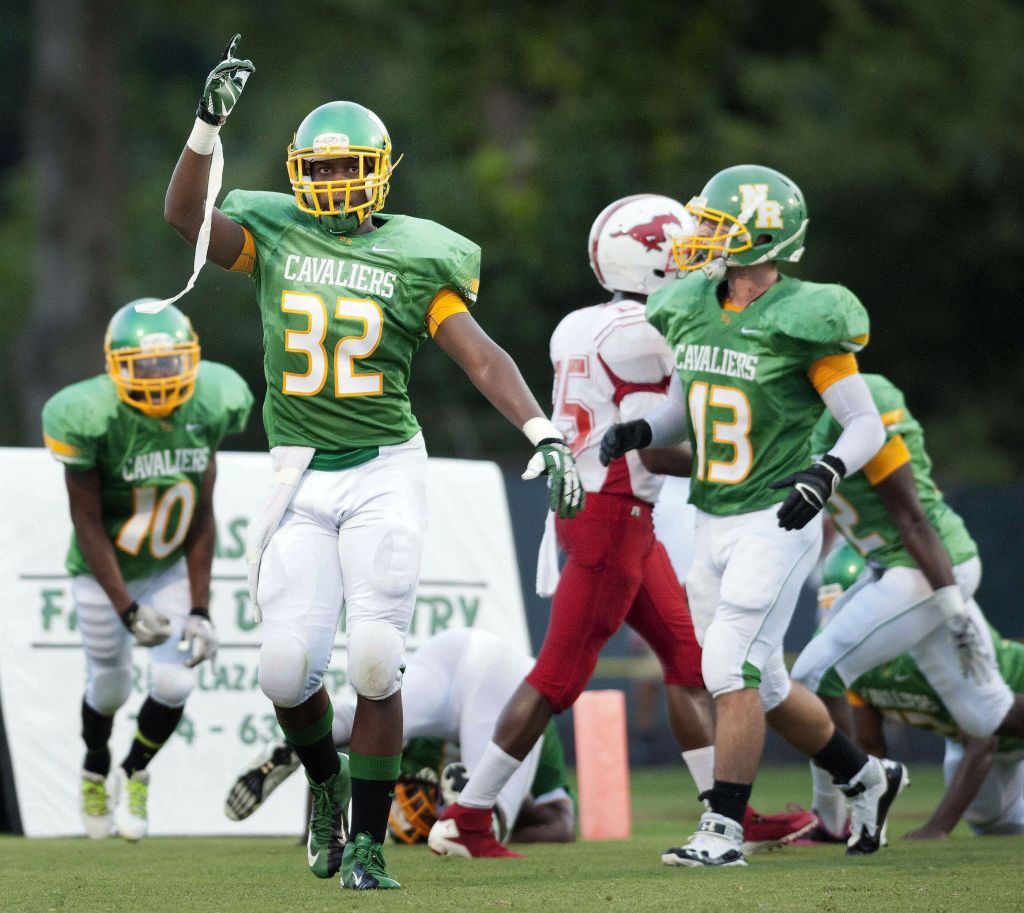 This is one of those freaky Fridays in which all eight of the football teams in the Post coverage area tangle with one another.
The longest bus ride will be North Rowan’s cross-county trip to Carson. There’s the annual neighborhood squabble between South Rowan and A.L. Brown, the annual rural rhubarb between West Rowan and Davie County, and another intra-county matchup between Salisbury and East Rowan.
It’s a night that promises intensity and large crowds.

West Rowan (0-1) at Davie (1-0)
West Rowan has won five straight in this series, although four of those five, including the Falcons’ special teams-fueled, 31-27 victory a year ago, could have gone either way.
Davie might be due to celebrate for the first time since the War Eagles beat the Falcons 35-21 in 2008. That game was the last one the Falcons lost before they reeled off 46 consecutive wins.
West Rowan entered the season with question marks, but defense wasn’t at the top of that list. After getting shredded by Mooresville for 500 yards, the Falcons sit at the bottom of the county defensive stats, probably for the first time since the 1990s. West Rowan entered the season looking for redemption after a 6-6 season. Now the Falcons have added last week’s performance to the redemption list.
Still, keep in mind that Mooresville is likely to be the best team West Rowan faces in the regular season, and the Falcons may not be anywhere near as bad as some people think.
Davie’s offense presents a tough matchup. West Rowan’s defensive philosophy is simple — stop the run, make them throw — but Davie’s Cade Carney is tougher to stop than most, and Davie also throws it well. Davie had more than 300 passing yards last week.
West Rowan should be able to score three or four touchdowns. It has a veteran offensive line going against a new Davie defensive line, and Harrison Baucom rushed for over 100 yards in his first game at tailback.
Davie still leads the all-time series 26-15-2. That includes a dominating 12-1-1 stretch in the 1970s and 1980s.

South Rowan (1-0) at A.L. Brown (0-1)
South Rowan is 1-0 for the first time since 2009. That year was the last season the Raiders beat the Wonders. It also was the last time South Rowan finished with a winning record.
That fine 2009 season and the 21-19 victory over A.L. Brown that sparked it still mean a lot to the Raiders.
While it’s possible that it’s a new day at South Rowan, the statistics from last week indicate it’s unlikely the Raiders improve to 2-0.
South Rowan’s best weapon was kicker Brennan Lambert.
The flip side of that is A.L. Brown’s defense was an absolute stone wall in the second half of a 20-14 loss to Concord. In other words, it’s unlikely South Rowan will score frequently.
The schools have played every year since South Rowan opened in 1961. The Wonders hold a 43-8-2 lead in the series. They have breezed through the last four meetings: 45-7, 63-12, 62-6 and 41-6. South Rowan coach Jason Rollins is 1-7 against the Wonders.

East Rowan (0-1) at Salisbury (0-1)
While both teams lost in Week 1, both showed fight and finished strong. The Mustangs scored the last 14 points in their 43-21 loss to North Rowan. The Hornets scored the last 21 in their 42-35 loss to Carson. Whether those late scores mean real momentum or false hope, we’ll find out when they meet at Ludwig Stadium.
There were eight lost fumbles in the 2013 meeting of these teams. So it wasn’t exactly a thing of beauty.
Salisbury’s defense had its hands full with Carson’s power running game last week, yielding 400-plus rushing yards, but the Hornets’ offense put up nice numbers. They boast the county’s leading passer in Riley Myers and the leading receiver in Ryan Jones. Willie Clark had a solid opening night with 130 yards.
Punting was the biggest issue for East Rowan last week, but the Mustangs shouldn’t be punting as often Friday.
East Rowan coach Kenneth McClamrock will get his first win — or Salisbury’s Ryan Crowder will get his third. It figures to be close.
Salisbury leads the all-time series 28-12 and has won nine of the last 12 meetings.

North Rowan (1-0) at Carson (1-0)
Carson has only started 2-0 once. That was 2010 when the Cougars finished 10-3 for the best record in school history.
Carson lost to North Rowan 34-15 in 2013 when the Cavaliers scored the first two touchdowns of the game on defense. North Rowan’s defense was the story all night as it held Carson’s Brandon Sloop to 55 yards on 16 carries.
North Rowan star Jareke Chambers was limited to 97 yards on 26 carries by the Cougars a year ago. Chambers isn’t a sure thing to play Friday after hurting an ankle in the opener. Both Chambers and Sloop have rushed for more than 3,000 yards in their careers.
Carson coach Joe Pinyan’s gameplan figures to be simple — run the ball, move the chains, milk the clock, and keep North Rowan’s explosive offense off the field. That means the key matchup is Carson’s large offensive line against a North Rowan front four that had seven sacks and mashed East Rowan’s running game.
North Rowan usually plays a 4-2-5 defense, but it will probably load the box with eight defenders to challenge Carson’s running game. Carson completed zero passes last week. It will have to complete more than a few to win tonight.
Carson leads the all-time series 4-3. The first win in Carson history came against North Rowan in 2008.