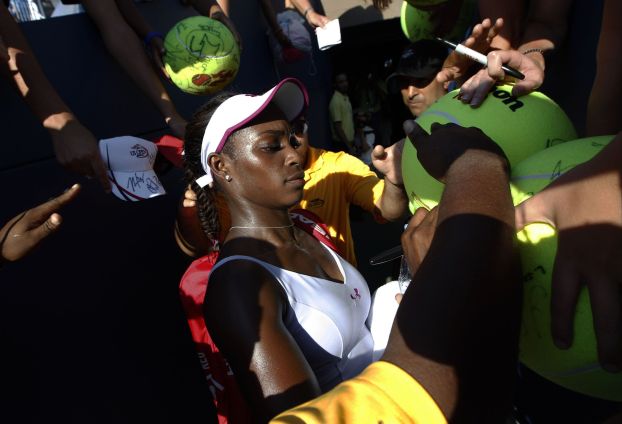 Murray outlasted Robin Haase 6-3, 7-6 (6), 1-6, 7-5 in the first round Monday during an afternoon that was hot but not particularly humid. He was mystified that the cramps came on so early — at the start of the third set after only about an hour and a half on court.
“When it starts to kind of go everywhere, you don’t know exactly where it’s going to creep up next,” he said. “When you stretch one muscle, something else then cramps, too.”
It started in the back of his left shoulder, and then quickly spread to his forearm. The right-handed Murray couldn’t toss the ball high enough to get any pace on his serves.
Between points, he’d twist his body to awkwardly stretch his left side. After hitting a winner, he’d reach for his quad.
Murray was twice down a break in the fourth set, but the 70th-ranked Haase unraveled with a string of unforced errors. He wasted three break points in the final game, when a missed call also cost him.
The eighth-seeded Murray had felt confident in his conditioning after productive training sessions in Miami, where he weathered far more heat and humidity than this. He wondered if something was amiss in his nutrition.
“Cramping in my left forearm?” a bewildered Murray said. “I mean, I didn’t use my left forearm a whole lot today.”
Haase, also bothered by some cramping, said he didn’t eat and drink enough beforehand because of an earlier-than-expected start — the first match on Louis Armstrong Stadium lasted just 47 minutes. But Murray said dehydration didn’t seem to be his problem.
Serving for the fourth set at 5-3, Haase double-faulted on break point to allow Murray to get back on serve. Murray then went up 6-5 when he took Haase’s second serve high and whacked a forehand winner.
With Murray trying to serve out the match, Haase smacked a deep return on his second break point that might have set him up to win the game. But the ball was called out, and after it was overturned on review, they had to replay the point. This time, Haase hit a volley into the net.
Murray is notorious for suddenly clutching at an ailment after a poorly played point. On this day, though, the misery was clearly real. The two-time major champion went after winners to shorten points, tried to stay upright to keep the strain off his legs. It was just enough to eke out the victory.
“I don’t think if it would have gone to five sets I would’ve been the favorite,” Murray said.
Three years ago, he and Haase did go five in New York, with Murray rallying from a two-set deficit to win in the second round.
After Monday’s loss, Haase planned to complain to the ATP that he was denied treatment during the match for a sore foot. But the Dutchman insisted he wasn’t distracted by Murray’s shows of discomfort.
“I was more busy with myself, and I was struggling myself,” Haase said. “I tried to play my game. It didn’t bother me what he did.”
No such struggles for top-seeded Novak Djokovic, who breezed past U.S. Open novice Diego Schwartzman 6-1, 6-2, 6-4. Djokovic wrapped up the final match on opening day at the year’s last Grand Slam event as the hour grew late, with fans calling out to him from the far-away seats at Arthur Ashe Stadium.
“I hope it was a midnight delight for all you guys,” he told them in an on-court interview.
Fifth-seeded Maria Sharapova, who missed last year’s tournament because of an injured right shoulder, made a successful return by winning the final 10 games to beat Maria Kirilenko 6-4, 6-0 in a matchup of 27-year-old Russians and longtime friends. Actor Alec Baldwin got into the action, too, catching an out-of-bounds shot that sailed over Sharapova and bounced into the seats.
Also, 10th-seeded Caroline Wozniacki of Denmark advanced 6-1, 3-6, 2-0 when Magdalena Rybarikova of Slovakia had to stop because of an injured left hip.
Ninth-seeded Jo-Wilfried Tsonga also needed four sets to beat Juan Monaco 6-3, 4-6, 7-6 (2), 6-1. Nick Kyrgios — the Australian teen who stunned Rafael Nadal at Wimbledon — came back from three code violations, just one outburst away from default, in a 7-5, 7-6 (4), 2-6, 7-6 (1) upset of 21st-seeded Mikhail Youzhny.
Julien Benneteau, seeded 24th, was upset in five sets by fellow Frenchman Benoit Paire.
Third-seeded Stan Wawrinka and fifth-seeded Milos Raonic both advanced in straight sets.
Top-seeded Novak Djokovic played later under the lights at Arthur Ashe Stadium in the first night session of the year’s last Grand Slam tournament.
Earlier, Venus Williams, 34, beat 43-year-old Kimiko Date-Krumm 2-6, 6-3, 6-3. The combined age of 77 was believed to be the oldest for a women’s Grand Slam pairing, the WTA said.
Along with the 19th-seeded Williams, 21st-seeded American Sloane Stephens also advanced by routing Annika Beck.
Second-seeded Simona Halep rallied from a set down for a 6-7 (2), 6-1, 6-2 victory over 20-year-old Danielle Rose Collins, who was playing her first main draw match at a tour-level event. As a sophomore at Virginia, an unseeded Collins won the NCAA title to earn a wild card into the U.S. Open.