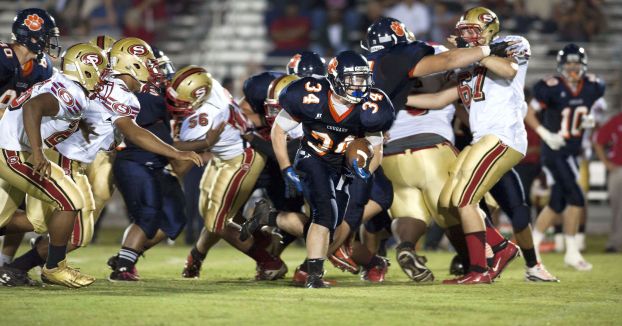 East Rowan at North Rowan
The season begins with a bang with fans wondering if the Cavaliers (13-1) can repeat the runaway success of 2013, and fans wondering if new coach Kenneth McClamrock can lead the Mustangs somewhere better than last season’s 4-8.
North Rowan was clearly the county’s best team last season — the best offense, the best defense, the best just-about-everything, including the coach of the year (Joe Nixon) and both players of the year.
Senior running back Jareke Chambers, the offensive player of the year, is still around, and needs just 72 yards Friday to break Mark Sturgis’ school rushing record of 3,259 yards that has stood since 1976. Even with an all-new offensive line, Chambers may get those 72 by halftime.
North also has a lot of a good 4-2-5 defense back on the field and will present a challenge for an East Rowan offense that will again count on the passing combination of brothers Samuel and Seth Wyrick.
The Wyricks scored a touchdown apiece against the Cavaliers last season, but Chambers rushed for 147 yards to lead North Rowan’s 33-16 victory in Granite Quarry.
North Rowan leads the all-time series 37-16-1 and has won the last three meetings. Nixon is 2-0 against the Mustangs.
WSTP-1490 will broadcast the game,

Salisbury at Carson
Joe Pinyan coached Salisbury to 100 wins in 10 consistent seasons (2003-12) that produced one 2AA state championship and other years when the Hornets were among the elite teams in their classification.
While it still feels weird to see Pinyan in Carson orange coaching against the Hornets, this matchup has less hype and hoopla than it did in 2013. That’s partly because people have gotten used to Pinyan at a different school and partly because Salisbury head coach Ryan Crowder is no longer a rookie. When these two teams met last August, Crowder was making his debut against his mentor.
Salisbury (2-9) played inspired on Pinyan’s “homecoming” visit to Ludwig Stadium in 2013, and Carson (7-5) was fortunate to pull out a turnover-plagued 14-9 victory.
Carson should have an easier time tonight, as it returns a half-dozen marquee players, including running backs Brandon Sloop and Darren Isom, veterans who will take pressure off new quarterback Andy Lear.
Quarterback Riley Myers returns to steer Salisbury’s offense, and you can expect a few more aerials than when Pinyan was directing the Hornets.
Salisbury leads the all-time series 5-2.

Mooresville at West Rowan
Mooresville (11-2) is a 4A program on the rise and takes on a 3A program determined to prove it’s not fading.
West Rowan (6-6), the dominant team in Rowan County for a decade, is coming off it shakiest season since 1998, so coach Scott Young, who has three state titles to his credit, has preached character even more than execution in the preseason.
Mooresville looked loaded in scrimmages, and veteran coach Hal Capps still has quarterback Tommy Bullock to direct a brisk rushing attack that averaged 336 yards per game last season.
West Rowan has a reputation for physical play, is huge on the defensive line, and is never easy to run against. This one figures to come down to who prevails in a vicious fight in the trenches.
West Rowan’s offense breaks in a new quarterback Kacey Otto, a junior. It’s a difficult assignment for him to face a fast Mooresville defense in his first outing.
West Rowan beat Mooresville in Mount Ulla in 2012. Mooresville won 35-21 at home last season and leads the all-time series 23-21. Young is 10-5 against the Blue Devils.
There’s always heat and history when these two neighbors play. Mooresville broke the Falcons’ 46-game winning streak on opening night in 2011.
WSAT-1280 is broadcasting the game.

South Iredell at South Rowan
South Rowan is 5-37 the last four seasons and was winless (0-11) in 2013.
Don’t look for an immediate turnaround because South Iredell (8-4), which rolled 44-9 against South Rowan a year ago is expected to be solid again.
South Rowan does have good players back, with quarterback Aaron Kennerly leading a spread offense and inside linebacker Burke Fulcher anchoring a 3-4 defense.
The state association has a new mercy rule — an automatic running clock whenever there’s a 42-point differential in the second half. That rule would’ve come into play in a number of South Rowan games last season, but the Raiders are optimistic they’ve improved enough through the weight room and transfers that mercy rules won’t be a factor.
South Rowan leads the all-time series 5-1-1, although South Rowan’s most recent victory was in 2002.
The schools battled to a scoreless tie in 1974.

A.L. Brown at Concord
This is still the state’s best series. The neighboring high schools battled in football for the first time in 1924 and have tussled without interruption since 1931. Counting three playoff meetings, the Spiders lead the Wonders 43-40-4, so it’s been highly competitive, to say the least.
Concord (15-1) has had the upper hand lately, winning 33-20 in 2013 and 21-14 in 2012 on its way to back-to-back 3A state championship game appearances.
The difference in 2013 was Concord back Rocky Reid, a Tennessee commit. He is one of the top handful of players in the state and arguably the best player in 3A. Reid broke scoring runs of 57, 82 and 48 yards against the Wonders (7-5) in 2013 and figures to make the difference again.
Still, Concord is rebuilding its defense, while the Wonders’ have a lot of offense back (four starting offensive linemen and three good backs). Even with an unsettled quarterback situation, A.L. Brown should make this one very interesting.
A.L. Brown’s Mike Newsome is 0-2 in Bell Games, so he’d love to get this one. It probably comes down to whether or not the Wonders’ defense can limit Reid’s big plays.

Davie at Greensboro Page
Davie leads this series 5-4 thanks to a wild 50-49 overtime win in 2008 in which the War Eagles rallied from a 27-0 deficit.
This Davie team doesn’t figure to get down 27-0 in what looks like a toss-up contest.
Davie (4-7) lost 32-22 to Page (6-6) in 2013 as the Pirates limited Davie star Cade Carney to 93 yards on 20 carries.
Davie still has Carney, quarterback Parker Correll and two strong linebackers. Davie has stressed improved special teams and defense in the preseason and hopes to start working on a winning season tonight.