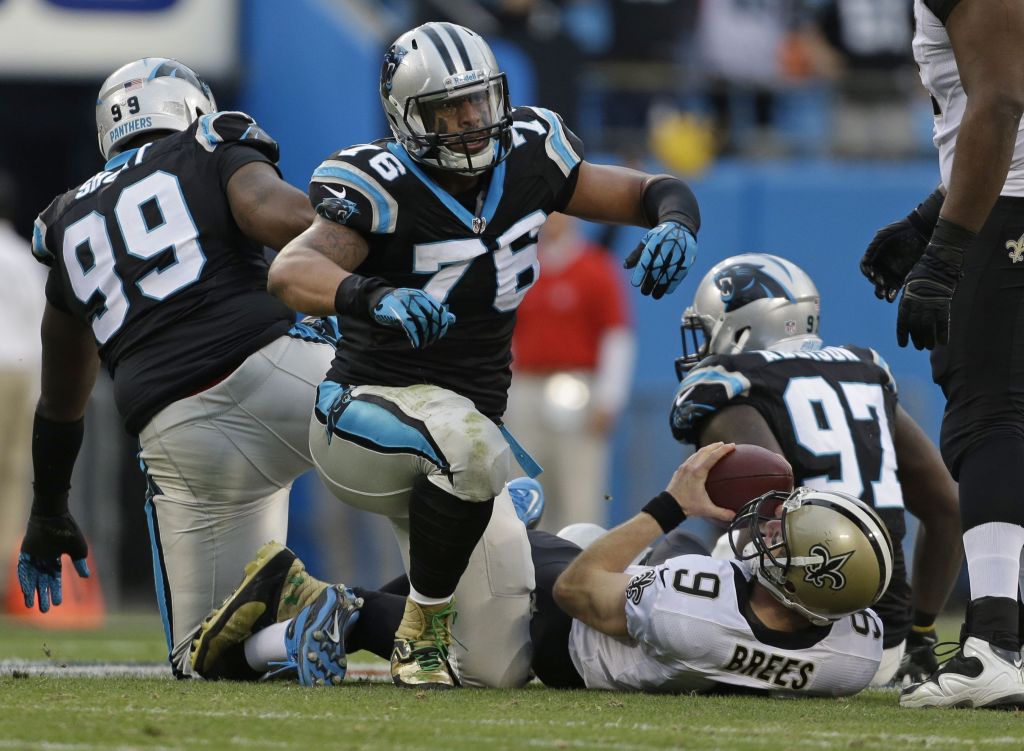 SPARTANBURG, S.C. (AP) — The Carolina Panthers are setting the bar a little higher this season after leading the NFL in sacks in 2013.

Defensive tackle Colin Cole said one of the goals for this year’s defense is to break the NFL’s single-season sack record of 72 set by the 1984 Chicago Bears — a team that included current Panthers coach Ron Rivera at linebacker.

The Panthers are coming off a franchise-record 60-sack season and return all of their starters and most of their reserves from a talented front seven. The league’s No. 2-ranked defense features veteran pass rushing ends Greg Hardy and Charles Johnson, who combined for 26 sacks last season, and the NFL’s reigning Defensive Player of the Year in middle linebacker Luke Kuechly.

Carolina is also hoping to get some added penetration from second-round draft pick Kony Ealy, a player the team said it had a first-round grade on entering the draft.

It’s a lofty goal, for sure, but Cole said “if you don’t talk about it, you don’t bring it into fruition.

“We set our bar pretty high last year. … but the goal is to surpass that and get up there with the big dogs of the past years and set records,” said Cole, who started 13 games last season for Carolina.

Rivera was a rookie on a 1984 Bears, although he didn’t register any sacks that season.

He said while he’d like to see his own team beat that record, it won’t be easy.

Chicago’s defense was led by coordinator Buddy Ryan, whose innovative “46 Defense” featured a plethora of blitzes.

Rivera said the Bears had the “perfect storm” in terms of personnel, a group included Richard Dent, Dan Hampton, Steve McMichael, Mike Singletary and Wilber Marshall and would go on to win the Super Bowl the following season.

“We were very talented, but we blitzed a lot more,” Rivera said. “We were doing the 46 (defense) which was very new to a lot of people and innovative. So it created a lot more opportunities.”

Rivera also said the rules of the game have changed and that officials are a little more lenient in terms of allowing offensive linemen to use their hands.

Still, Rivera said anything is possible.

“The nice thing is our guys have that kind of confidence,” Rivera said. “We have some good pass-rushers. That’s what it is. You have to have a combination.”

Johnson, who has averaged 11 sacks per season over the past four years, isn’t much into predictions or lofty goals.

But he likes the talent the Panthers have assembled on defense and said the familiarity players have with the system and each other could pay huge dividends.

“It’s a feel thing,” Johnson said. “We know each other and know how to rush and how guys rush. So you become comfortable with each and what each player can do. That allows you to communicate well, and you don’t have to worry about the little things. You just go play.”

He said the Panthers have one of the best defensive lines and the fastest group of linebackers in the league.

“We have a group of guys on defense that can get downhill and make plays for us,” Cole said.

He’s more concerned about winning football games than piling up sack numbers. But he said taking down the Bears sack record would be an extraordinary accomplishment.

“That would be nice. It really would,” Rivera said. “Do we have the kind of guys that are capable of good numbers? We do. You can predict all you want. You just don’t know. You have to do it.”

NOTES: Johnson (hamstring) and Ealy (foot) remained out of practice Monday recovering from injuries. … Rivera said he still hasn’t settled on a starting left tackle, although Byron Bell continues to work at that position. … RB Jonathan Stewart said he felt fine after participating in his first padded practice Monday in more than nine months.