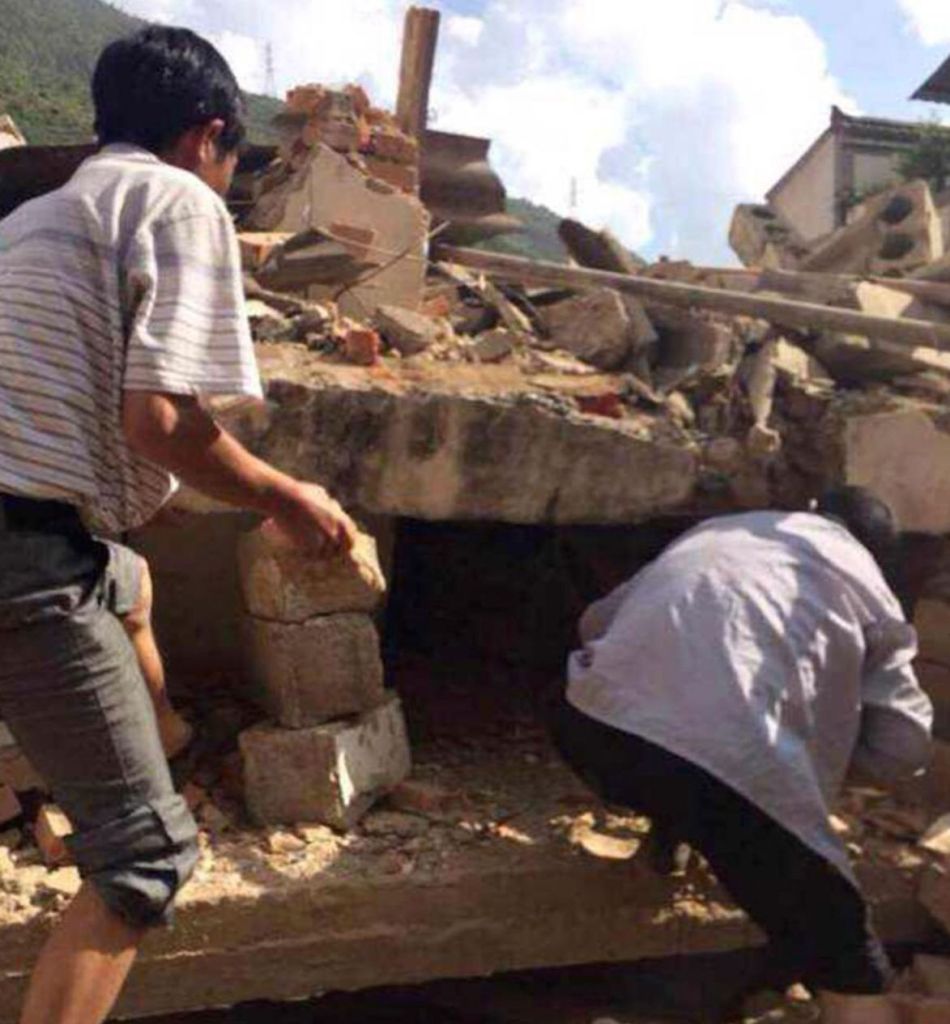 BEIJING (AP) — Rescuers dug through shattered homes looking for survivors of a strong earthquake in southern China’s Yunnan province that killed at least 381 people and injured more than 1,800.
About 12,000 homes collapsed in Ludian, a densely populated county located about 277 miles northeast of Yunnan’s capital, Kunming, China’s official Xinhua News Agency reported.
The magnitude-6.1 quake struck at 4:30 p.m. on Sunday at a depth of 6 miles, according to the U.S. Geological Survey. Its epicenter was in Longtoushan township, 14 miles southwest of the city of Zhaotong, the Ludian county seat. China’s earthquake monitoring agency put the magnitude at 6.5.
Ma Liya, a resident of Zhaotong, told Xinhua that the streets there were like a “battlefield after a bombardment.” She added that her neighbor’s house, a new two-story building, had toppled, and said the quake was far worse than one that struck the area in 2012 and killed 81 people.
“The aftermath is much, much worse than what happened after the quake two years ago,” Ma said. “I have never felt such strong tremors before. What I can see are all ruins.”
Rain and thunderstorms were forecast for the area in the coming hours, complicating efforts to bring tents, water food and other relief supplies to survivors. Roads had caved in, and rescuers were forced to travel on foot.
Xinhua and state broadcaster CCTV said 381 people were killed, citing rescuers. CCTV said 1,891 were injured, three were missing and 29,400 had been evacuated. The death toll was expected to rise, once rescuers reached remote communities to assess casualties.
Many of the homes that collapsed in Ludian, which has a population of about 429,000, were old and made of brick, Xinhua said, adding that electricity and telecommunications were cut off in the county.
The mountainous region where the quake occurred is largely agricultural, with farming and mining the top industries, and is prone to earthquakes.
Relief efforts were underway, with more than 2,500 troops dispatched to the disaster region, Xinhua said. The Red Cross Society of China allocated quilts, jackets and tents for those made homeless by the quake, while Red Cross branches in Hong Kong, Macau and neighboring Sichuan province also sent relief supplies.
U.N. Secretary-General Ban Ki-moon offered “his condolences to the Chinese Government and the families of those killed,” according to a statement from his office. The statement said the U.N. is ready to “lend its assistance to efforts to respond to humanitarian needs” and “to mobilize any international support needed.”
The White House also offered its condolences.
“Our thoughts and prayers are with the families of those that lost their lives,” said National Security Council deputy spokeswoman Bernadette Meehan. “The United States stands ready to assist.”
Chinese state broadcaster CCTV said the quake was the strongest to hit Yunnan in 14 years.