12-year-old Harrison Shell sells produce from his own garden 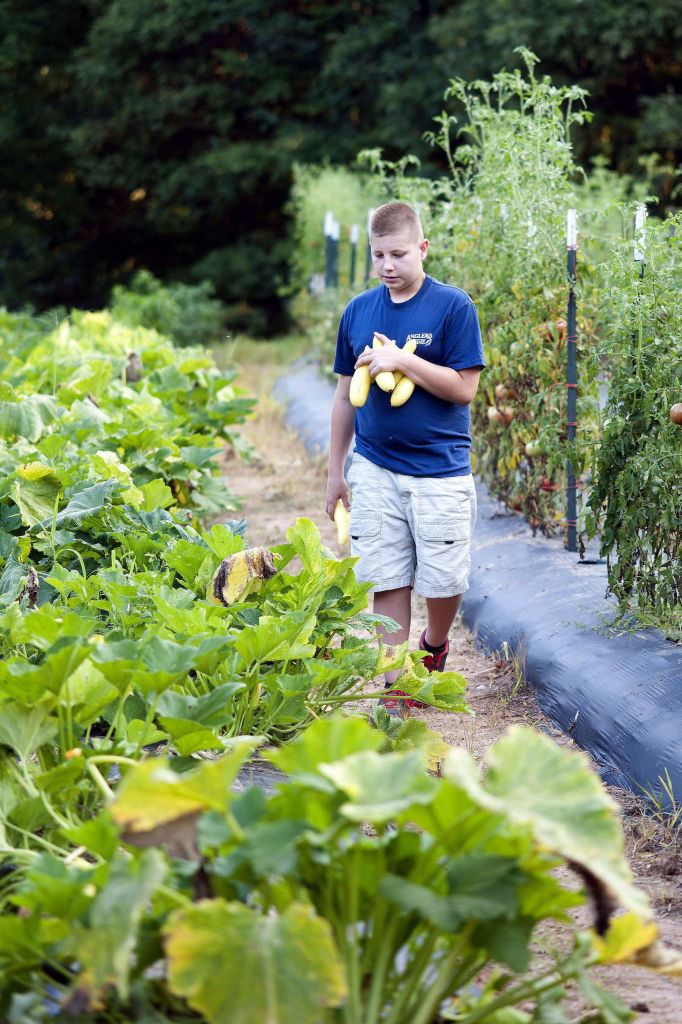 HINA GROVE — Harrison Shell sits astride a camouflage-print four-wheeler, pointing off into the distance.

“Follow me,” he says, and tears off down the gravel road.

He pulls up at the home of his grandparents, John and Sue. But that’s not where he’s going. He’s headed to the garden, and the best way to get there is via ATV or pickup.

Photographer Jon Lakey gets into the truck with Harrison’s dad, Kenneth, and I hop on the back of the four-wheeler.

I realize later that was probably against my better judgment.

Harrison has worked the garden, planted the vegetables, picked them and delivered them to a host of family and friends — that part with help from Kenneth and his mom, Wendy.

Pretty good for a kid who turned 12 on Friday.

For those of us who no longer live in the country, it seems a humongous garden. Not so, Harrison says. “Compared to some gardens, it’s not that big.”

His neighbors, Robert and Laura Miller, owners of Miller’s Produce, got him started.

“I wouldn’t have had it without them,” Harrison says. Robert came over and used a machine to put down the plastic for him.

Early on a recent cool evening, Harrison is walking among the rows, picking peppers, checking on his second planting of squash and cucumbers. He bites into a banana pepper, makes a face, spits it out.

“It’d be better mixed in with something,” he admits. Minutes later, he bites into a green pepper, then realizes it’s a jalapeno. Grandmother Sue comes to the rescue, ferrying a cooler of bottled water with the four-wheeler.

“The girls come over with us a lot,” Kenneth says, watching. “They’re not very productive, but they come with us.”

Harrison wanted to make some money for the same reason a lot of other boys want to make money: he wanted a truck.

In the summertime, he goes to work with his daddy. Kenneth trims cow hooves for about 20 local and regional dairy owners. Harrison had noticed the Japanese mini trucks that are often used on the farms. He wanted one of his own.

Harrison had planted a garden the last few years, but this summer’s is the biggest yet. He started selling produce three years ago at Vacation Bible School.

Harrison loads up plastic Food Lion bags with whatever produce customers order. Typically, he charges about $10 per bag, sometimes more for a special order.

“We have to make certain bags for certain people,” Harrison says. “I need to keep my customers happy.”

One of those customers is Doug Lassiter at C-Optical in Ketner Center.

“Kenneth brought some stuff by and we tried to buy everything he had,” Doug says. “I was impressed with the fact that Harrison is 12 and that he is doing most of it himself. He’s not in the house playing X-Box. Everything he’s brought has been extremely good.”

After work, Harrison and Kenneth head to the garden.

“And we stay until dark,” Kenneth says, “or until Wendy starts fussing at us relentlessly to come home.”

“She does that a lot,” Harrison says.

On this particular morning, Kenneth left at 4 a.m. for a job in Spartanburg. He wanted to make sure he was home in time to meet us. Harrison did not go with him.

“I had to get a haircut for the paper,” Harrison says. “I weed-eated out here, too.”

Harrison and Kenneth recently brought some tractors and lawn mowers from Alice Weaver which had belonged to her husband, Wayne. They also bought a rolling garden seat. That’s come in handy for Harrison. Some nights, when the half-runners came on, he picked ’til late, his daddy holding a flashlight for him.

Watering the garden is not as difficult as you might think. Depending on the weather, Harrison waters about every two or three days. Before they planted the garden, they put in drip-line irrigation. The gas-powered system draws water from the pond, a short distance on down through the woods. Harrison’s grandfather also designed the system so they could add fertilizer and other nutrients to the soil.

Walter Goodman at Goodman Farm Supply has been an invaluable resource for Harrison.

“He actually knew what he was talking about,” the boy says.

He’s made all sorts of friends through his efforts. Kenneth and his brother farm about 20 acres over in Faith. They’ve got soybeans in this year. Last year, they raised corn. A lady who lives next to the property, Miss Holly, told Harrison she didn’t have a garden any more. When he started taking produce to her, she was thrilled to death.

“I got my hair cut today,” Harrison says. A cut is typically $12, but Harrison traded some food and got a $6 haircut.

Last spring, Harrison purchased some chickens from Walter. He now sells free-range, organic eggs for $3 a dozen. Jessie buys about all of them, and returns the cartons.

Harrison picks up his rooster to show him off. The rooster clearly doesn’t like this. After Jon shoots some photos, Harrison lets the rooster go. It clucks and stalks off.

He also raises goats, which he sells to local Hispanic families for the meat. Right now, he’s got a herd of nearly a dozen. We have to ride over and see them.

Back on the ATV, we ride down to the pond to look at the other end of the irrigation system.

“This is the pump that runs that fancy irrigation system,” Harrison says, tongue firmly in cheek. “It’s a 160-cc Honda engine. It’s a pump motor. We didn’t rig this up. This was already rigged up.”

When he’s not in the garden, Harrison spends a lot of time out here on the 3-acre pond.

“I really like to fish,” he says. He catches bass, brim, an occasional catfish. He catches frogs, too, but releases them.

For his 12th birthday, Harrison asked to go fishing up at Rutledge Lake Campground near Asheville.

We also have to look at the Japanese mini truck. It’s got a right-hand drive, and just about everything on it needs to be fixed.

“I’m gonna drive it to school when I get old enough,” Harrison says, attempting to crank the engine. It does not start.

“Papaw will make it run,” Kenneth assures his son. John is recovering from surgery on his right arm. It’s in a sling at the moment.

Harrison purchased the truck from Craig Corriher, a dairy farmer who lives near Wadesboro, with his own money.

Of course, we have to go talk to Robert. While we’re admiring the chickens, Kenneth gets on the ATV and takes off in the woods to go look for him. I can see where Harrison gets his driving skills.

Kenneth returns shortly, and tells Harrison where he can find their neighbor. Once again, we speed away on the ATV. In the waning light, Robert is picking the last of some tomatoes. He is thrilled that his young friend is interested in gardening.

“I wanted to help him any way I could,” Robert says. “We talked about what to spray and fertilize, when to water. I got some plants for him. It’s the future, I guess, if he continues with it. I think he enjoys it, dontcha?”

Robert has been replanting crops all through the season. He hopes to have squash and cucumbers through the end of September.

“It depends on what you consider hard work,” Robert says. “It’s like running. When you enjoy something, it’s not hard work. And farming is easier than running.”

We let Robert get back to work, and head back down the Shells’ long driveway. Harrison opens up the throttle on the ATV. I can see the speedometer reach 40, for a second. I try not to scream. Again.

I’m sitting behind him, but I’m sure he’s grinning.

He spent more than a week at Jeff Gordon Children’s Hospital, learning about type 1 diabetes.

“It’s something we deal with every day,” Kenneth says. “He handles it very responsibly. I’d rather have it, if I could have it. With what we saw at the hospital, it could be worse. It has been a real blessing to have that hospital this close.”

Since then, Harrison has lost 30 pounds. He now eats a lot of the food he grows. He’s been fitted with a wireless pump. He shows this off, flexes his muscles. Before he eats, he enters the amount of carbohydrates in the meal on the hand-held control, and it programs the pump with the appropriate dose of insulin.

Harrison’s blood sugar ranges anywhere from 60 to 400. His goal is to try to keep it between 80 and 150. Dr. Thea Pfeifer, his pediatric endocrinologist, explains that type 1 diabetes is much harder to regulate, because you must provide all the insulin for your body, matching it with every food and every activity.

“Healthy eating is important for all of us, but it’s especially important if you have diabetes,” she says. “It’s a big deal. Harrison has embraced it. It’s harder for a child if the family is not on board with it. It’s all about attitude. He’s a delight.”

The two trade stories about their gardens and their chickens.

The Shells have changed their eating habits, Kenneth says. “When we went to work, there didn’t a day go by we didn’t get a milkshake somewhere.”

Harrison has asked to have a milkshake on his birthday. He’ll adjust his pump accordingly.

Harrison can’t really tell if his blood sugar is high, but he knows when it gets low. He feels week and shaky.

“We see people all the time now with insulin pumps,” Kenneth says. “We know what to look for.”

Harrison has had to give up pizza and milkshakes and soft drinks, but he always gets salads now when he and his daddy go out to lunch.

“It’s overwhelming sometimes,” he says softly. “It still is, really.”

“When we were in the hospital, this little boy with diabetes came to see us, and told us the world was not going to end,” Kenneth says.

At the moment, however, Harrison has strapped on a helmet to show off his dirt bike. He pops a few wheelies in his grandparents’ yard — showing off — before heading for home.