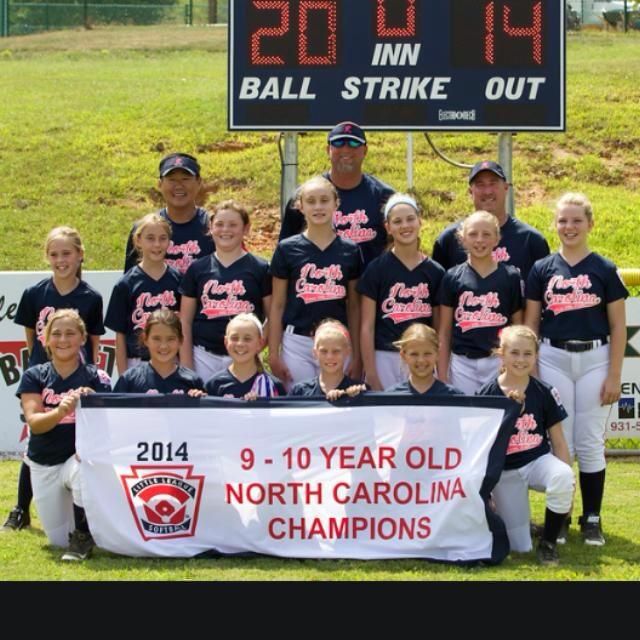 SALISBURY – After sweeping to district and state championships, Rowan County Little League’s 10-under softball team earned a wardrobe change.
“The girls changed from their Rowan shirts into jerseys that said North Carolina,” head coach Steve Yang said. “It wasn’t just Rowan Little League anymore. They were representing their entire state now, playing for everyone in their state. That made a difference. It meant a lot to them.”
Thirteen girls and three coaches returned as conquering heroes to their home field at Salisbury Community Park at 7:10 p.m. on Wednesday. They stepped off a bus, drained from the 10-hour trip back from Clarksville, Tenn., but smiling as Southeast Regional champions.
“It was seven hours by car, but 10 by bus,” sighed misty-eyed league president Dan Wales.
Firetruck sirens wailed, confetti sprayed, congratulatory signs waved and players received T-shirts, red roses, balloons and hugs, although not necessarily in that order from a crowd of about 200.
“We are the Champions” and “Sweet Caroline” provided the musical soundtrack, and it was true that good times never seemed so good. The towering regional trophy on display was about as tall as some of the girls.
Several parents said it was the best thing they’d ever been a part of.
“You know, we spent $4,300 on transportation and $6,700 on rooms, and it was well worth every penny,” Wales said. “We raised a lot of money and we had sponsors from the community who stepped up big for us.”
A long list of sponsors who helped with the trip’s expenses graced a banner, and there was even a speech from a dignitary to commemorate the first regional softball triumph by a North Carolina team in the 10s age group.
Councilwoman Karen Alexander represented the mayor’s office and reminded players that for all their individual talent, it was teamwork that had brought them to the winner’s circle. Alexander told the beaming 10-year-olds that they had made not only their city and county, but the entire state very proud.
There’s no national championship at this age level, so the Rowan team won everything that it had a chance to win.
Yang and assistants Rob Hales and Eric Dowling began three-days-a-week practices with the team on June 11. The team won the district title, avenging last season’s loss to East Surry, and then rolled through the state tournament in the mountains of Franklin with four straight lopsided victories.
“Experience really helped us,” Yang said. “We had nine girls back from last season who came very close to a state championship.”
Rowan experienced its first adversity in the regional. After winning two games easily, Rowan lost 5-4 to West Virginia in extra innings. It was a difficult loss, especially for a team that hadn’t had anything go wrong previously.
“The girls handled the loss more calmly than the coaches and parents,” Yang said with a chuckle. “That’s a very cool, calm and collected group of girls. We knew we had pitched well enough and fielded well enough to win, but our bats had let us down. We had 24 hours to work on our hitting and to talk about and think about that loss.”
“More than anything I just got mad at West Virginia,” shortstop Allison Ennis said. “After we lost, we wanted to win even more. We wanted to win really bad.”
To get to play the West Virginians again, Rowan had to survive an elimination game with the Georgia champs. After a slow start. Rowan started hitting and advanced with an 8-1 victory. Ennis and Kary Hales struck the key blows.
That victory put Rowan in the championship game, but it still had to beat West Virginia twice to win the double-elimination regional.
“West Virginia had a much faster pitcher than we’d seen and she had a lot of different pitches,” said Taylor Walton, Rowan’s pitcher. “We had to adjust to her speed, but after we’d seen her one game that really helped us.”
There was pregame tension in the rematch with West Virginia. Dowling and a West Virginia coach were both ejected after a nose-to-nose confrontation in warmups.
Second baseman Ellie Wilhelm knocked in the icebreaking run for Rowan and Kary Hales had a two-run single as Rowan put eight runs on the board in the first inning, jumped ahead 13-0 after two innings and eventually romped 14-3.
“We caught on to their pitcher,” Hales said. “Then we started hitting some balls really hard.”
Wales’ favorite moment was a bases-clearing double by Megyn Spicer when she had two strikes on her.
Tuesday’s showdown with West Virginia for the regional title was all Rowan.
“That’s because we played like we should,” Yang said.
Hales had two doubles and drove in four runs in a 10-0 romp. Walton held West Virginia to one hit and knocked in two runs herself. Left fielder Caylie Keller made a great catch to help preserve the shutout.
“We wanted it,” Walton said. “We knew it would be a great accomplishment.”
Wales and Yang calculated that Rowan outscored its district, regional and regional opponents 171-23. There was another round of applause when that math was announced to the crowd.
Yang held the microphone for a long time, but there were a few silences when no words came out.
“I’m never speechless, but right now I almost am,” he said. “I think this team has done something very important for softball in this state. This is something none of us will ever forget.”
While they were a dominating softball team, at the end of the day, they were still 10-year-old girls.
Asked what the best thing about winning a regional championship was, catcher Ellen Yang, Steve’s daughter, smiled shyly and said, “The best part was just being with my friends.”