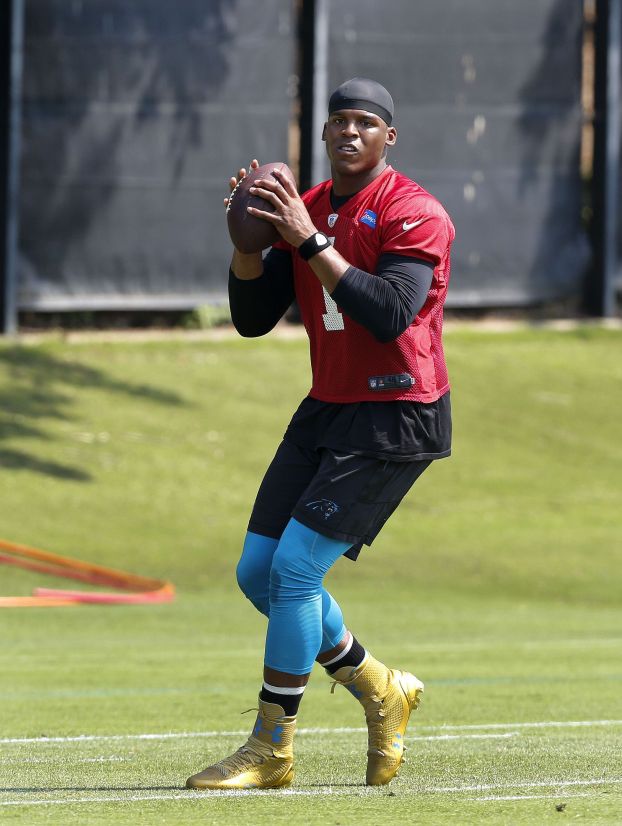 CHARLOTTE — Pro Bowlers Cam Newton and Greg Hardy will be ready to practice when the Carolina Panthers take the field for the start of training camp Friday night.
The same can’t be said of often-injured running back Jonathan Stewart.
Panthers general manager Dave Gettleman said Newton has been cleared medically following ankle surgery on March 19 and is expected to participate in all drills — which comes as great news for coach Ron Rivera, who is returning from a European vacation.
“Cam will participate full go and we will monitor just to make sure,” Rivera said. “He will go through treatments to make sure, in terms of maintenance, but he is starting day one and will be on the field.”
Newton was not made available for interviews Thursday.
Rivera said Newton recently worked with some of Carolina’s receivers away from team facilities and came away feeling good about his surgically repaired ankle.
“I’m pretty excited about having him back on the field full time with those guys,” Rivera said.
Gettleman said Hardy, convicted on two counts of domestic violence last week, will not face any suspension from the Panthers at this time.
He said the team will follow the league’s stance and let the legal process play out.
“We constantly talk to our players about putting themselves in a position to succeed both on the field and even more importantly in life, so what has happened with Greg is very concerning and very disappointing,” Gettleman said in the team’s first public comments on Hardy since his conviction July 16.
“These are very serious allegations,” the GM said. “At the same time, we also respect the fact that Greg has appealed the decision and is entitled to a jury trial. We have been in touch with the league and we’re in the position that they have a personal conduct policy, which we are a part of. At the same time, we have to respect the legal process. That’s basically where we’re at.”
Hardy appealed the conviction last week after a judge sentenced him to a 60-day suspended jail sentence and 18 months probation for assault on a female and communicating threats.
His appeal will be heard by a jury trial, but a date has not been set and it could be several months — likely after the completion of the NFL season and would become a free agent — before the case is heard in court.
Hardy, who signed Carolina’s franchise tag tender for $13.1 million, is a key player on the league’s No. 2-ranked defense. He had a career-high 15 sacks last season and has 26 sacks over the past two seasons.
Gettleman said Hardy’s arrest in May did not play a role in the team’s decision not to offer him a long-term contract. However, Gettleman wouldn’t discuss Hardy’s long-term future with the team.
Hardy’s teammates said they don’t believe his off-the-field issues will be a distraction moving forward as the Panthers prepare to defend their NFC South title.
“It’s completely separate from anything we’re doing here,” tight end Greg Olsen said.
Stewart, who missed 17 games the past two seasons, pulled a hamstring recently in workouts and will miss 1-2 weeks.
Gettleman also said offensive guard Edmund Kugbila, a former fourth-round draft pick, will have back surgery and will miss the entire season. The Panthers had high hopes for Kugbila when they draft him but he’s not played a game for Carolina since coming into the league.
Gettleman said safety Tre Boston (hernia) and cornerback De-Andre Pressley (stress fracture) will start training camp on the physically unable to perform PUP list.
“To get that far and to lose, especially at home, was a tough pill to swallow,” Olsen said. “We are trying to get to where we were.”