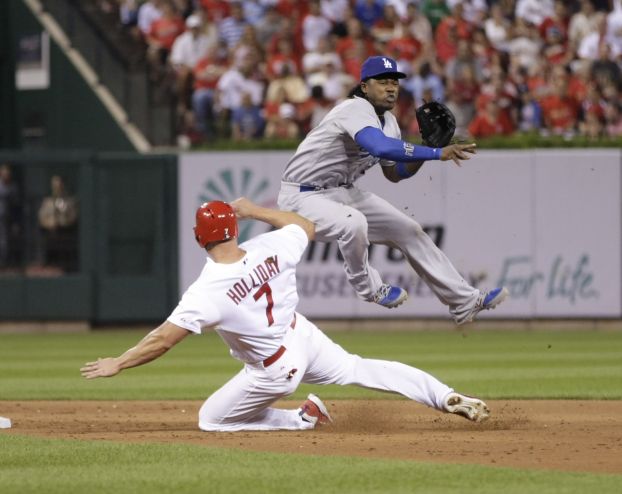 ST. LOUIS (AP) — Adrian Gonzalez hit a tiebreaking single in the ninth inning off St. Louis Cardinals closer Trevor Rosenthal and the Los Angeles Dodgers salvaged the finale of a three-game series with a 4-3 victory on Sunday night.
The Dodgers pulled into a virtual tie for first place with San Francisco in the NL West despite a so-so outing from Clayton Kershaw, whose run of seven straight starts allowing one or fewer runs came to an end. Yasiel Puig did not play after getting hit by a pitch on the left hand a day earlier and the Dodgers finished without Hanley Ramirez, who was taken out in the ninth — also after getting struck on the left hand.
Gonzalez leads the National League with 38 road RBIs. He missed a chance earlier, flying out with the bases loaded to end the fourth. J.P Howell (2-3) got the last out in the eighth and Kenley Jansen finished for his 28th save in 31 chances.