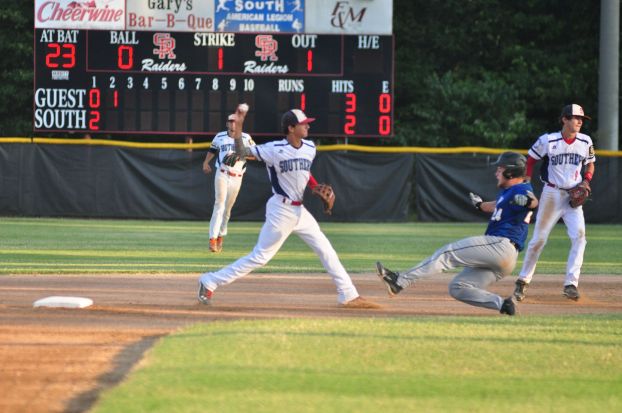 LANDIS — It’s third-and-long for the Southern Rowan American Legion baseball team.
Despite some late-game fireworks on Monday, SR dropped a 10-6 Game 2 decision to the visiting Mooresville Moors — falling behind two-games-to-none in the best-of-5 second-round series.
“It’s basically win or go home,” coach Ben Hampton said after Southern (10-13) was outhit 15-8. “At this point we’ve got reel off three straight or we go home. Crazier things have happened. We’ll come tomorrow, take BP and see who decides to show up.”
It was a game that made Post 66 (18-5) want to burst into song — something along the lines of ‘Second verse, same as the first.’ As they did in Sunday’s series opener, the guests overcame an early deficit and pulled away for an easy win.
“We’ve won five playoff games in a row,” said Mooresville shortstop Brett Pope. “We’re playing good. We’re playing relaxed. And we’re hitting the ball really well.”
Post 66 may have been better at placing the ball between Southern fielders than crushing it. It capitalized on a handful of SR mistakes — four errors, seven wild pitches and a couple of hit batsmen.
“Errors killed us. They always do,” said first-baseman Chase Labbe. “And they kept hitting the ball where we weren’t. It’s almost like we have to score in every inning to win.”
Labbe provided plenty of mojo for SR. He went 4-for-5 with his first two home runs of the season and four RBIs. He opened the scoring in the last of the first inning following teammate Ben Gragg’s ground-rule double to center field. With two away Labbe yanked a 2-1 pitch from Catawba signee Jamie Anderson over the left-field fence for a 2-0 lead.
“That shows you how well these guys can hit,” said winning coach Seth Graham. “They can line it up.”
SR designated hitter Dillon Atwell epitomized the locals’ attack. He reached base four times but never crossed the plate.
“The way it started off, we all thought it would be a different scenario (than Sunday)”, he said. “But the errors and mistakes hurt us. Here and there, it all comes back to bite you.”
Mooresville responded as it did in Sunday’s Game 1 victory — by scoring a flurry of runs. It broke through with single runs against SR southpaw Blake Johnson in the second, third and fourth innings. Josh Lamberth’s soft-serve single into right field put the guests ahead 3-2.
“After they went ahead, we didn’t slow down,” Pope said after going 3-for-5 with a pair of stolen bases. “We had 15 hits. We had lots of people on base. We gave our starting pitcher something to work with.”
They did. Michael Elwell doubled home a run that made it 4-2 in the fifth. An inning later it was 7-2 following Pope’s run-scoring hit to right and a subsequent throwing error.
By the eighth it was a 10-2 game, courtesy of three unearned runs and five wild pitches by SR reliever Bo Corriher.
“I thought we had momentum coming out of the first round,” Hampton said. “But we’ve been dead the past two nights.”
He finally detected a pulse in the Southern lineup in the bottom of the ninth. Facing reliever Aaron Harr, SR’s Eric Stowe reached on a leadoff error and moved to third when late-game replacement Jake Fulton ripped a double into the left-field corner. Stowe came home on a one-out wild pitch and another run scored when Ben Gragg lifted a sac fly to right.
Southern then ended the game with an exclamation point when Labbe roped another two-out, two-run homer over the fence in left.
Now the question becomes this: can Southern’s ninth-inning outburst propel it to a Game 3 victory tonight at Lake Norman High School?
“We hope it carries over,” said Atwell. “It’s do-or-die. We’ve got to do whatever it takes.”
And what’s that? “We’ve got to play our best game of the season,” Labbe concluded.
•

NOTES: Atwell will start for Southern tonight against Post 66 lefthander Ian Perkins. …. Labbe also delivered a sixth-inning double. … The game was stopped for 25 minutes prior to the bottom of the second when spectator Ronnie Overcash — vice president of China Grove Youth Baseball — collapsed and was transported by ambulance to the hospital.