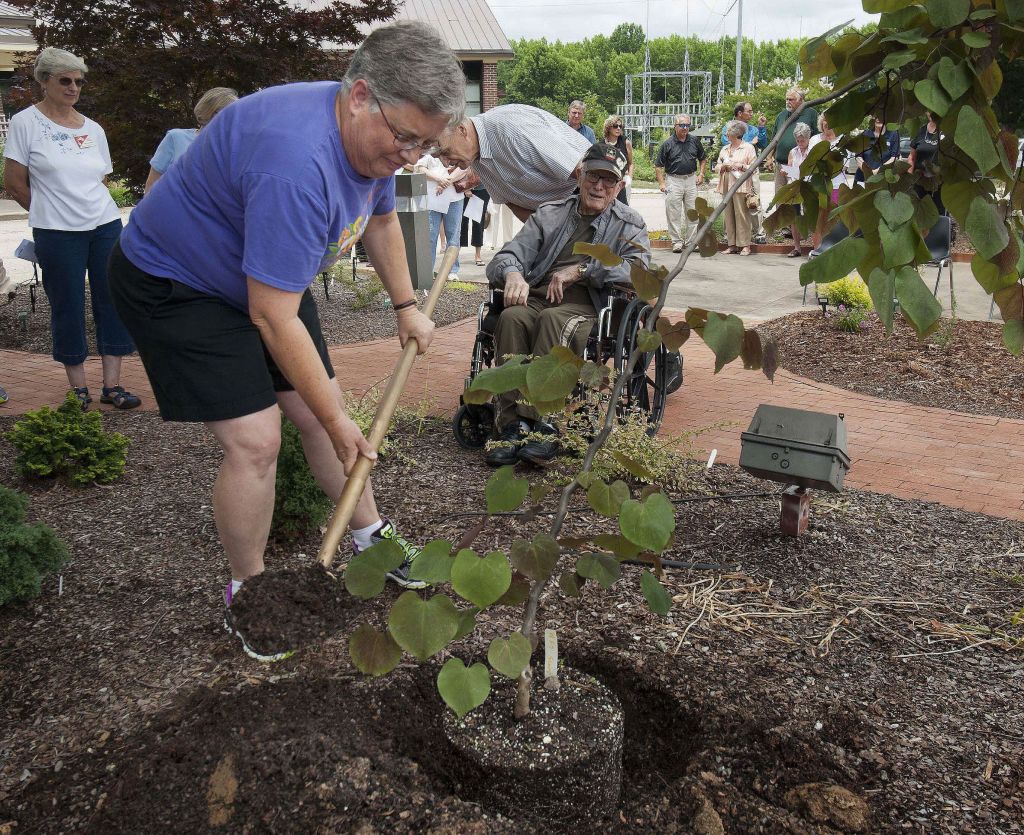 SALISBURY — It’s difficult to say who the star was Tuesday afternoon — 93-year-old Carl Sloop Jr. or the Rowan County Extension Master Gardeners.
Over the past three years, the Master Gardeners have transformed the grounds around the Rowan County Center at 2727 Old Concord Road with their Southern Living, Pollinator, Herb, Sensory and Container pocket gardens — not to mention what they’re doing with raised beds.
They have some tomato and bean trials going on there now.
Tuesday, the Master Gardeners added a rejuvenated Carl E. Sloop Jr. Garden to their resume. Around the front flagpole and between a large oak and maple, the MGs blended in some collectible perennials and bulbs with new soil, mulch and curvy brick pavers donated by Taylor Clay Products.
The complete refurbishment gives the Rowan County Center a welcome mat that’s enviable for any government building.
Tuesday’s short ceremony actually rededicated the island oasis, created in Sloop’s honor in 1997 after he retired as director of general services for Rowan County.
Over the years, the pocket garden was neglected until it became unacceptable to the sensibilities of the MGs. In their extreme makeover, all they really left of the original garden was a Japanese red maple Sloop planted himself in 1997.
This time, from his wheelchair and with the assistance of son Gene Sloop, Carl raised a shovel to help Master Gardener Jean Lamb plant a Ruby Falls weeping red bud in his garden.
“This is old stuff for me,” Sloop said. “I like to plant trees.”
Lamb served as chairwoman of the Sloop Pocket Garden’s makeover and its rededication. It also should be noted Lamb was recently named the 2014 State Master Gardener.
During his 27 years with Rowan County, Sloop became known for paying particular attention to flowers, trees, shrubbery and landscaping in general for county properties. Paul Canup worked with him much of that time.
“I think Carl was a master gardener before they had the training,” Canup said.
Sloop just didn’t plant things and leave them — he made sure they were maintained, too. “I was impressed with that,” Canup said.
Sloop’s attention to horticulture rubbed off on Canup, who acknowledged Tuesday that in retirement, he has become a gardener himself, with a special fondness for mums.
Sloop left a significant legacy during his years of working for Rowan County, not the least of which was his interest in helping to develop Dan Nicholas, Ellis and Sloan parks.
But it often came back to plants and landscaping for Sloop.
Don Bringle, director of facilities management for Rowan County, said Sloop once wanted part of a butterfly bush at his home replanted at the back of the Nature Center at Dan Nicholas Park.
Today it’s 12 feet tall, and “when it blooms, it is a sight to behold,” Bringle said.
It seems as though every butterfly in Rowan County makes a trip to that bush, Bringle said.
County Extension Director Darrell Blackwelder identified Sloop’s special butterfly bush as a harlequin glorybower, which is good information when your audience is mostly comprised of master gardeners.
Believe it or not, Sloop had a full 32-year career in the Army before he even worked for Rowan County. The 1941 graduate of The Citadel and World War II veteran of the Third Army in Europe retired as a colonel.
He wore an Army ballcap to Tuesday’s redux dedication.
Canup came to know Sloop in 1975, when his temporary job for the U.S. Soil Conservation Service was coming to an end. Sloop worked for the Rowan County Watershed Commission at the same time, and his office was next door to Lipe Barrier’s with the Conservation Service.
Sloop asked Canup whether he would like to work for Rowan County, and the next day started a 40-year friendship between the men. Canup said those early days working for Sloop and the county were spent on things such as a sediment control ordinance and watershed feasibility studies.
He recalled working by a stream one day when Sloop fell in love with the loamy, black soil of the creek bed and asked the owner whether he could load some of the dirt into the back of his truck.
Sloop took the soil to their county office building on West Innes Street near the railroad tracks and created a bed for pansies, which he would always replace later in the year with begonias.
“We had something blooming about all the time,” Canup said.
Master gardener Carolyn Glasgow interviewed Sloop back in 2012 and learned the China Grove native and oldest member of St. Mark’s Lutheran Church in China Grove just liked all plants and trees. If he had to name a favorite tree, it would be river birch.
He also has a fondness for roses.
Taking in the Carl E. Sloop Jr. Garden Tuesday, Canup couldn’t help but make one observation: Carl would have done it much the same way.