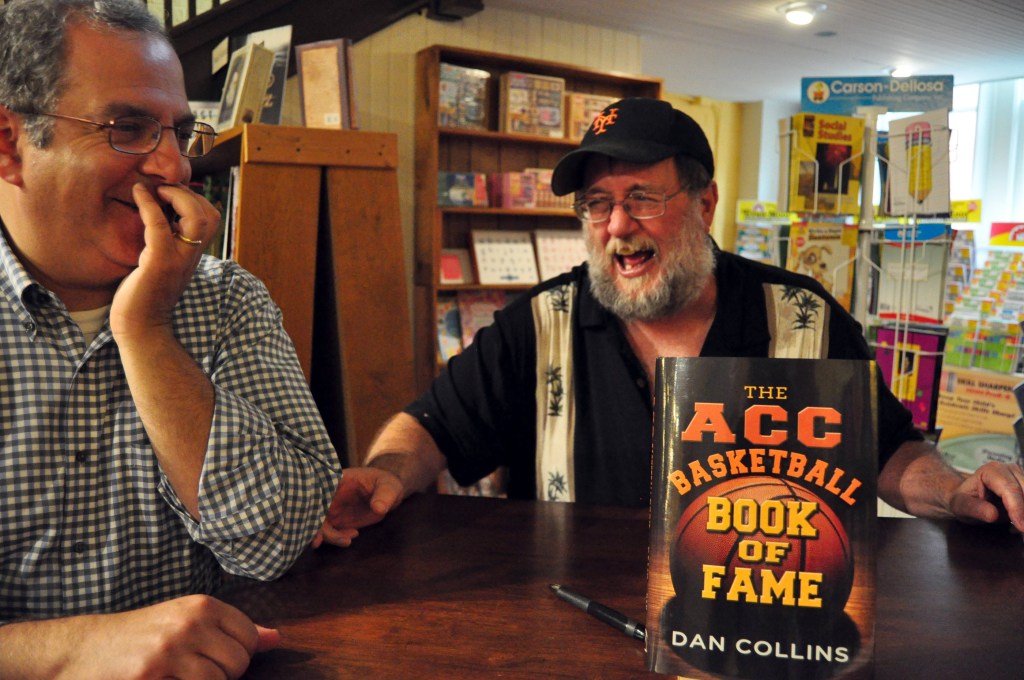 SALISBURY — Iconic subjects, each with strong North Carolina ties, were the focus of this year’s Sports Book festival sponsored by the National Sportscasters and Sports Writers Associaton.

Three veteran writers showcased their newest books on a rainy Sunday afternoon at the Literary Bookpost in downtown Salisbury. Their works range from N.C. basketball legend Michael Jordan to a history of the Double-A baseball Southern league to a unique, yet objective, effort to select members of an ACC Basketball Hall of Fame.

Biographer Roland Lazenby of Roanoke, Va., featured his new book “Michael Jordan : The Life”; Huntsville, AL columnist and writer Mark McCarter tackled the 50-year history of the Southern League in “Never A Bad Game,” while veteran sportswriter Dan Collins of the Winston-Salem Journal used an objective formula to evaluate and profile ACC Basketball Hall of Famers in “The ACC Basketball Book of Fame.”

It was the third year the NSSA has hosted and promoted what they call a Sports Book Festival and the reason is very simple says incoming NSSA president Bob Ryan.

“These are our brethren who have labored to do things which are the male equivalent of having a baby,” Ryan said. “This is a moment where they can introduce and hopefully sell a few books. It is so much in the spirit of this entire weekend.”

Ryan is an accomplished author of 13 books himself as well as a 44-year writer with the Boston Globe and a television sports commentator. The four-time winner of NSSA’s National Sportswriter of the Year honor is semi-retired now, which enables him to tackle the “intimidating” job of being NSSA board president this year.

He promises to keep the Sports Book festival alive for the future, especially since his new book “Scribe” comes out in October. The book, which covers his storied sports career, will be one of those featured in next year’s festival.

As for this year, despite a heavy downpour just as the event began, a number of local folks and NSSA participants turned out to buy the books and get authors to sign them.

“The NSSA is so generous to do this for us,” McCarter said of the opportunity to showcase his new book. “It is just one more part of the red- carpet treatment the community gives us each year.”

McCarter’s book “Never A Bad Game: Fifty Years of the Southern League, 1964-2014” was truly hot off the press as he received the first case of books Saturday night.

“Literally the first time I saw the finished product was last night,” he said noting he was very pleased with it. “There is nothing like seeing it and holding it.”

The format of the book covers the 50-year modern history of the AA baseball league by compiling a collection of 50 stories or profiles covering the players, teams, coaches and cities in the league. He also used extensive research to name the 50 greatest Major Leaguers who played in the Southern as well as 50 others who never quite made it.

“I learned a lot about the league,” McCarter said. “I reconnected with many players, but I talked to way too many widows.”

Most North Carolina and ACC basketball fans think they know everything about the great Michael Jordan, but Lazenby’s exhaustively researched “Michael Jordan: The Life” creates a whole new perspective.

The book delves back through generations on both sides of Jordan’s family to discover how the ACC and NBA legend became so “fierce, so competitive and successful.”

It matter-of-factly looks at the extreme poverty, racial issues, family dynamics and other factors that influenced Jordan’s life. Author of more than 60 sports-related books, Lazenby spent a long time researching and interviewing for this one. “ It took me four years and I about ruined by health doing it.” he said.

It is now in its third printing since its 2013 release.

An ACC beat writer for 40-plus years, Collins felt it was time for the league to have a Basketball Hall of Fame. But it had to be devised in a fair and objective way.

So in his new book “The ACC Basketball Book of Fame”, Collins reveals and profiles 78 players who made the cut. He spent two years devising and applying a formula to fairly determine the players using a point system. Then he wrote about them in words as well as song.

Collins, also known as “Country Dan” is a talented singer as well as writer so for his book he wrote songs about the players. “I wrote a soundtrack to a book,” he said. “Now who does that.”

He admits that his Hall of Fame list is not perfect or absolute but it’s based on sound criteria.

“It is a history of ACC basketball through its greatest players,” he said.