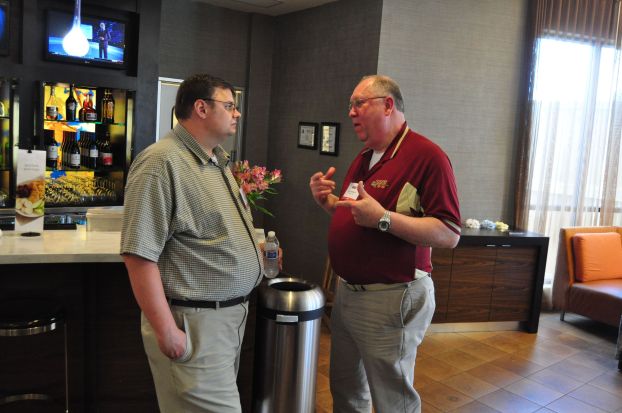 SALISBURY — Bud Alderman is smiling because it’s a good time to cover Florida State football and he was talking Seminoles to anyone willing to listen at the Courtyard Marriott Hotel Saturday.
The Nashville, Tenn., resident is an NSSA associate member and a part-time sportswriter. He’s not an award winner but looks forward to the Hall of Fame Weekend and has for the past three years. Alderman is one of many in town for the awards weekend, which brings the best and brightest in the sports journalism industry to Salisbury, a tradition that’s spanned 55 years now.
“Last year, Dick Vitale and I had our pictures taken together,” Alderman said. “His birthday and mine are like two days apart and they had a celebration for his since he’s pretty important.”
But moreso he’s ready for Aug. 30 when the college football season kicks off and FSU begins its defense of the national title against Oklahoma State in Arlington, Texas. FSU will surely be a top-5 team to start the season and will be tested with home dates against Notre Dame and Clemson along with battles against in-state rivals Miami and Florida.
“A lot of people don’t realize there were only like two games last year where the starters played the whole game,” Alderman said on the first day of the NSSA’s Hall of Fame weekend. “I think they lost some key people, but with the depth they have, I don’t see where they’re really going to miss a beat.”
Alderman covered the original Blockbuster Bowl in 1990 between Florida State and Penn State which paired legendary coaches Bobby Bowden and Joe Paterno against each other. He’s been invloved with the Music City Bowl, held in Nashville, for 16 years working in media relations.
A 1970 graduate of FSU, Alderman grew up in Toledo, Ohio and played basketball and football. His grandparents lived in Florida and he picked up watching FSU. He lined up at wide receiver and watched Fred Biletnikoff star at for the ‘noles before he went on to become a Hall of Famer in the NFL.
He’s been involved with the Seminole boosters for years and is a lifetime member of the FSU Alumni Association.
Alderman owns a security company but he files a weekly report during the season and has every year since 2008. He was a stringer for the Winter Haven News Chief for a while and plans to start a website devoted to FSU and the ACC.
In the 90s, FSU won two national titles under legendary coach Bobby Bowden. Bowden stepped down in 2010 after a decorated career that included 14 straight seasons, ending in 2000, where the Seminoles won at least 10 games and finished ranked in the top five of the AP poll.
Alderman’s been there for the down years, which were few and far between with Bowden at the helm.
“People don’t realize Bowden had one losing record in 1976,” Alderman said. His first year he was 5-6. The next year he went 8-3 and went to a bowl game.”
FSU coach Jimbo Fisher guided his team to an unbeaten season last year and were led by star quarterback and Heisman trophy winner Jameis Winston.
“Jimbo and his wife stayed in Nashville one year after they played in the Music City Bowl,” Alderman said. “Jimbo and his wife and family stayed and we celebrated New Years’ Eve together.”
Alderman has come away impressed with Winston, a freshman who threw a game-winning touchdown pass in the final minute of the national championship game on his 20th birthday.
“I’ve interviewed him on several occasions and he’s very down to earth,” Alderman said. “He’s always in a coat and tie and presents himself very well.”