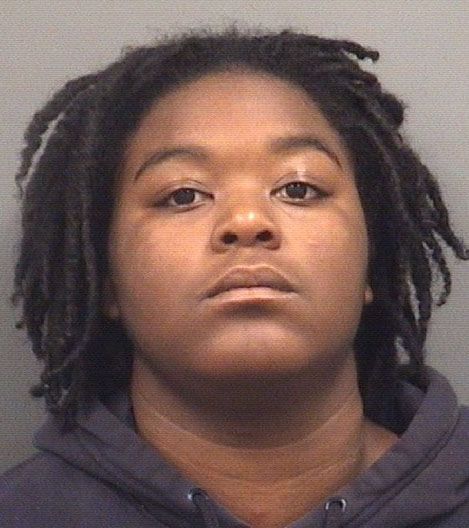 Teen refuses to hand over phone, scuffles with officer, is jailed

Authorities charged a Cleveland teen with resisting arrest and disturbing the school during exams after she was told to turn in her cell phone to school officials at Henderson Independent High School.
The Salisbury Police charged Cassandra Pharr-Bacon, 18, of the 400 block of East Main Street, with misdemeanor resist, obstruct, delay an officer; misdemeanor disturbing the public and felony malicious conduct by prisoner.
Police Capt. Shelia Lingle said students must turn in their cell phones to school officials upon arrival and collect them at the end of the day. Pharr-Bacon reportedly still had her phone. The School Resource Officer, T.W. Moore, was notified and attempted to obtain the phone from the student. She refused, saying she didn’t have a phone, but the officer could see an imprint of the phone in her front pocket.
Moore asked Pharr-Bacon to step into his office, but she refused. She began loudly cursing at the officer in the hallway causing a disruption. She called the officer a “rent-a-cop” and other derogatory names. The two struggled as Moore tried to arrest the teen. The two fell into a stairwell and the officer withdrew his Taser. He did not use it, Lingle said, after Pharr-Bacon relented.
The officer placed the Taser into its holster and the teen tried to wrestle away from the officer so he pulled the Taser out again. The officer did not deploy the Taser once the teen was calm. Officials said at one point, Pharr-Bacon tried to headbutt the officer.
He was able to escort her out and place her into the back of a patrol car.
“I’m getting into the car because I want to not because you told me to,” Pharr-Bacon reportedly told the officer.
The officer buckled her seatbelt, but she managed to undo the seatbelt while in handcuffs, a report said.
The teen refused to provide police with her name and information and the officer had to contact the school. She spit across the room and it landed on the officer’s arm. He eventually had to place a spit mask over her head.
Pharr-Bacon remains in the Rowan County Detention Center under a $3,000 secured bond.
She is expected in court next month for charges of disorderly conduct at a school, misdemeanor possession of stolen property, felony possession of a controlled substance on a jail premise.