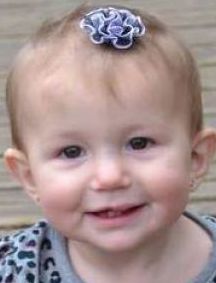 SALISBURY — A Rowan judge told John Travis Turner and Alisha Nicole Carlisle on Wednesday they could face the death penalty if convicted in the January murder of 15-month-old Malaya Heun, Carlisle’s niece.
The two were brought into Rowan County District Court separately for their first appearances. Each was appointed an attorney during the short hearings.
Kannapolis investigators charged the two Monday with first-degree murder, felony abuse inflicting serious injury and assault with a deadly weapon inflicting serious injury. Officials say the toddler suffered repeated physical abuse at the hands of her aunt and Turner, who is Carlisle’s boyfriend.
Carlisle, 20, is the sister of Christy Heun, Malaya’s mother.
District Court Judge Charlie Brown appointed Landis attorney Rick Locklear to represent Turner and Salisbury attorney Doug Smith to represent Carlisle. Turner, 30, will be returned the Cabarrus County jail, where he has been held on a probation violation. Both defendants are being held without bond.
Rowan County District Attorney Brandy Cook addressed the court but did not say whether she’ll seek to prosecute this as capital case with the death penalty as a possible sentence.
Investigators believed the child was assaulted Jan. 19 at her family’s apartment at 2508 Running Brook Drive in the Rowan County portion of Kannapolis.
Christy Heun told investigators she received a call at work from her sister, Alisha, saying she needed to return home because something was wrong with Malaya. The toddler was taken to the hospital in a private vehicle.
A search warrant said Carlisle and Turner were the only two people taking care of the toddler before she died on Jan. 21.
An autopsy report said Christy Heun elected to remove her daughter from life support.
The autopsy also found Malaya had several broken ribs, some of which had already healed. She had multiple bruises on her face, head and body, a fractured clavicle and torn intestines. The report said the broken collarbone “would have been obvious and painful,” and would have limited the use of her right arm.
The injuries were consistent with Battered Child Syndrome, the autopsy said. Authorities said they believe Malaya had suffered physical abuse for at least a month.
A family member at the hearing left angrily and declined to comment. A probable cause hearing is scheduled to take place June 30.