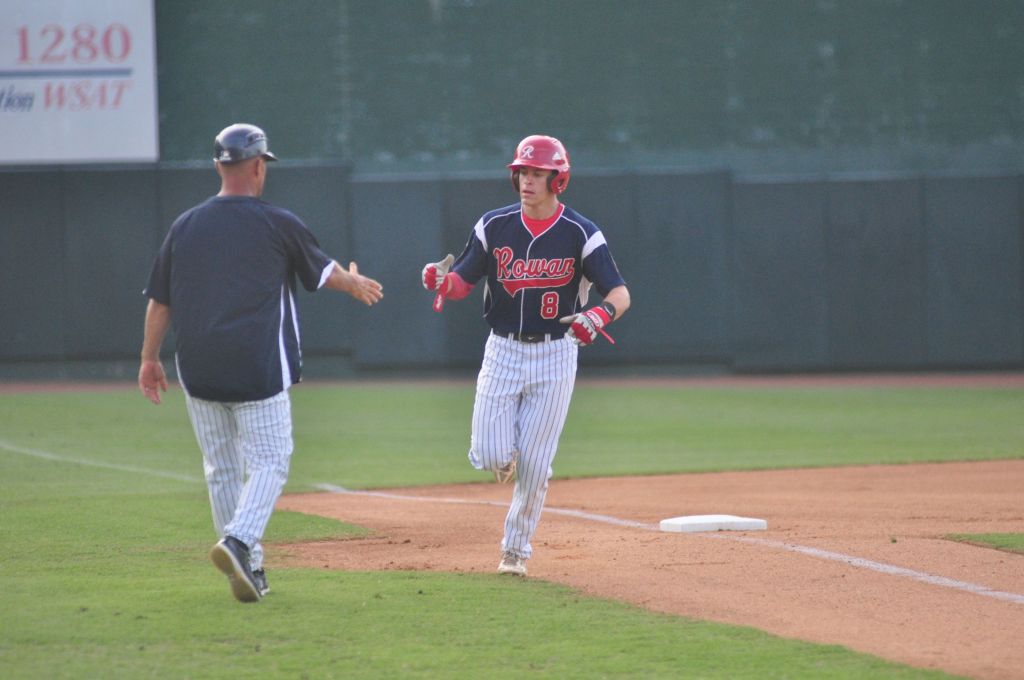 SALISBURY — Baseball players are a superstitious lot, and Rowan County’s Luke Setzer is so hot with a bat in his hands, that he isn’t changing wardrobe-wise right now.
“Same shoes, same T-shirt, same armband, same socks,” said Setzer after he socked the three-run homer that got Rowan rolling toward an 8-3 win against Kernersville on Monday at Newman Park.
So same, uh, everything?
“Don’t worry,” Rowan catcher Dustin Ritchie interjected. “We make sure Luke washes everything — every day.”
While Setzer stayed consistent, not everything was business as usual for Rowan.
Hunter Shepherd took the mound and while a sophomore homeschooler against Kernersville’s talented lineup seemed like a mismatch, it really wasn’t. The young lefty allowed a fifth-inning homer to Stephen Hemrick, but he held his own. He was almost as sucessful against Kernersville (10-4) as he was when he dominated for the Greater Cabarrus Stallions against various home-education squads.
“Shepherd had the confidence to throw a good 3-1 changeup to one of their college guys,” Rowan coach Jim Gantt said. “He’s really going to help us. Maybe he’s surprising people right now, but in years to come people aren’t going to be surprised when he has success.”
Rowan’s pitching plan was to go with Shepherd, who changes speeds well, for about 60 pitches, and then bring high-energy, gas-pumping lefty Connor Johnson in behind him.
“He had a couple of quick innings and still felt good, so we sent him back out there for the sixth,” Gantt said.
In short, the gameplan worked. Johnson relieved Shepherd with one out in the sixth in a 3-3 game, shut out the visitors the rest of the way and punched out six.
“It was a good piggyback tonight,” said Johnson, who is 3-0 in Legion after a 10-0 high school season at East Rowan. “Shepherd is doing a great job.”
Shepherd lives in the North Rowan area. He said the transition to big-crowd, big-hype Legion baseball hasn’t been all that difficult.
“It’s still just baseball,” he said. “As a pitcher, it’s still about hitting spots. I’ve still just got to focus on the mitt and throw strikes. I was pitching to some very good hitters, but I had good defense behind me.”
Rowan’s defense was excellent after a few struggles in the third inning when Kernersville scored twice.
Rowan’s outfield was particuarly good. That’s where fast center fielder Harrison Baucom is flanked by Setzer, who played center field for East, and Ryan Jones, who played center for Salisbury High.
Jones made a stellar play in left field early to let everyone know Rowan (6-2) was determined to bounce back from an ugly loss at Davidson County on Sunday.
“Luke threw some missiles from right field and we had a good team game,” Jones said. “We got good pitching, and we got key hits.”
Rowan jumped out 3-0 in the first against Kernersville starter Justin Pegram. A two-out infield hit by Chance Bowden kept the inning alive, and a clean single to center by Riley Myers gave Setzer a chance to swing. He worked the count full, and then … bam!
“I’m looking fastball, but he threw me a changeup,” Setzer said. “Fortunately, he left it up high and I was able to stay back on it.”
Setzer launched his second homer of the summer over the left-field wall, and the crowd roared as Bowden and Myers jogged home in front of him. Setzer, who is headed to Catawba, hit four homers during the high school season.
Kernersville fought back to tie after five, but Rowan scored the decisive run in the sixth after Setzer was hit by a pitch and raced to third on Jones’ single. Ritchie scored Setzer with a flyball to medium right. Harrison Hollis made a strong throw home, but Setzer slid home ahead of the tag for a 4-3 lead.
“This was a big turnaround game for us,” Setzer said. “Kenersville can hit and they can pitch, so every run was important.”
After Johnson shut down Kernersville’s Devil Dogs in the seventh and eighth, Rowan scored four in the bottom of the eighth to break it open.
Jeremy Simpson’s bouncer to shortstop with the bases loaded and one out was the key play. It was going to be tough to turn a double play on Simpson, anyway, and when the ball was booted, Rowan scored two runs. Back-to-back wild pitches pushed the score to 8-3.
Kernersville put two men on base in the ninth, but Johnson ended the game with his usual flair.
“This was more important than some non-league games,” Johnson said. “That’s the team that knocked us out of the playoffs last year. and we know if we go far this year, that’s a team we’re going to see again.”
Johnson said that Rowan (6-2) didn’t have a tough time bouncing back from the Lexington loss.
“In baseball, you can’t take one loss to heart,” he said. “You’re playing a lot of games.”
Rowan, which entertains Eastern Randolph tonight at Newman Park, played this one well.
“We showed resiliency and we did some good things,” Gantt said. “Simpson had a great read to score on a dirt-ball, Ritchie called a good game. Shepherd gave us a chance to win against a good team.”