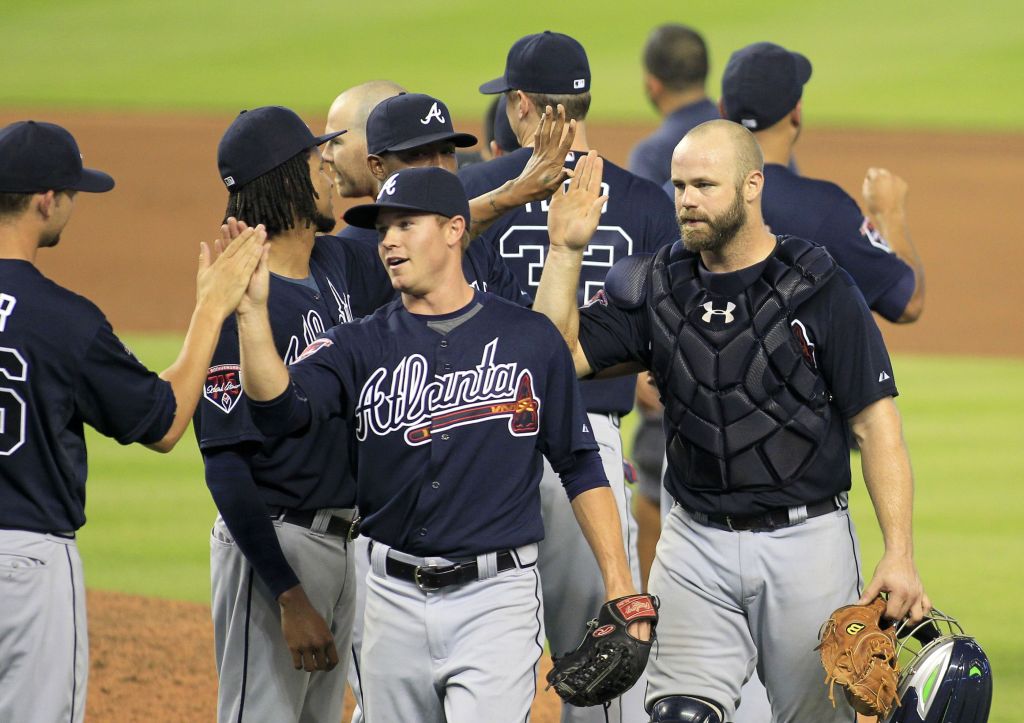 MIAMI — The Atlanta Braves made themselves at home all weekend at Marlins Park, including when Evan Gattis put a dent in the home run sculpture Sunday.
Gattis broke a ninth-inning tie with a two-run homer, newcomer Shae Simmons made another key contribution and Atlanta completed a three-game sweep by beating Miami 4-2.
“We played about as good a series as we’ve played in a while,” Atlanta manager Fredi Gonzalez said.
The Braves pulled off the sweep after losing four consecutive games to Boston, and after being swept by the Marlins during a three-game visit to Miami a month ago.
“They’re a good ballclub, and it’s good to get three wins,” Gattis said.
Making the sweep even more impressive is the Marlins’ 20-11 record at Marlins Park. They lead the majors in home victories and made a bid for a ninth-inning comeback Sunday.
Simmons, pitching in his second big league game, earned his first career save when he retired Christian Yelich with two on for the final out. Closer Craig Kimbrel was given the day off because of a heavy recent workload.
“I got through it,” Simmons said. “I’m not going to say it wasn’t a little intimidating.”
Simmons also got a key out in his major league debut Saturday. He left town with two game balls and two souvenir lineup cards.
“It’s kind of surreal,” he said. “I don’t really feel like it’s happened. I feel like I wasn’t even out there.”
The series began with the Marlins and Braves tied atop the NL East. Now Miami’s three games back.
“This was a good test,” manager Mike Redmond said. “Believe me, there’s a sour taste in all of our mouths.”
With the score 2-all, Freddie Freeman started the ninth with a single, only his second hit in 36 at-bats this year against Miami. Gattis then hit a 2-0 fastball into the sculpture in distant left-center field for his 11th homer, and the first this year allowed by Marlins closer Steve Cishek (4-2).
“That’s a big home run there, in this ballpark off that reliever,” Gonzalez said. “That doesn’t happen very often. The matchup there didn’t favor us.”
But Marlins Park seems to bring out the best in the Braves, their visit a month ago notwithstanding. Atlanta is 18-7 in the ballpark since it opened in 2012.
Gattis is batting .333 with six homers and 20 RBIs in 18 games at Marlins Park. He’s a fan of the stadium and even the colorful sculpture, which has its share of detractors.
“The sculpture? I like it,” Gattis said. “I like this park. It has been good to me.”
Marcell Ozuna hit a two-run homer, his 10th. Those were the only runs allowed by Aaron Harang in 6 2-3 innings, but he remained winless in his past four starts for Atlanta.
Alex Wood (5-5) pitched 1 1-3 perfect innings.
Miami’s Nathan Eovaldi gave up two runs while pitching a season-high eight innings. He has an ERA of 0.75 in five starts against Atlanta since the beginning of 2013.
Shaky defense cost Eovaldi an early lead. Jason Heyward hit an RBI single in the third, and then the tying run scored when second baseman Derek Dietrich failed to turn a double play that would have ended the inning.
“It was a tough series,” Redmond said. “We didn’t play our best, we didn’t play great defense, we didn’t run the bases well. We need to play better, but we know we can play with these guys. Every guy in that clubhouse believes that, but we have some work to do.”
NOTES: After the game, the Marlins optioned RHP Arquimedes Caminero to Triple-A New Orleans. … Ozuna made a sliding catch in center field to rob Chris Johnson of a hit in the seventh. … Freeman fell to 3 for 24 lifetime against Eovaldi. … The Marlins open a two-game series at home Monday against Tampa Bay, with Randy Wolf (0-1, 4.50) scheduled to pitch against Alex Cobb (1-2, 2.93). … The Braves are off Monday and begin a two-game series Tuesday at home against Seattle, with Mike Minor (2-3, 3.41) scheduled to start against Hisashi Iwakuma (3-1, 2.39).