‘The tallest man in Rowan County’ 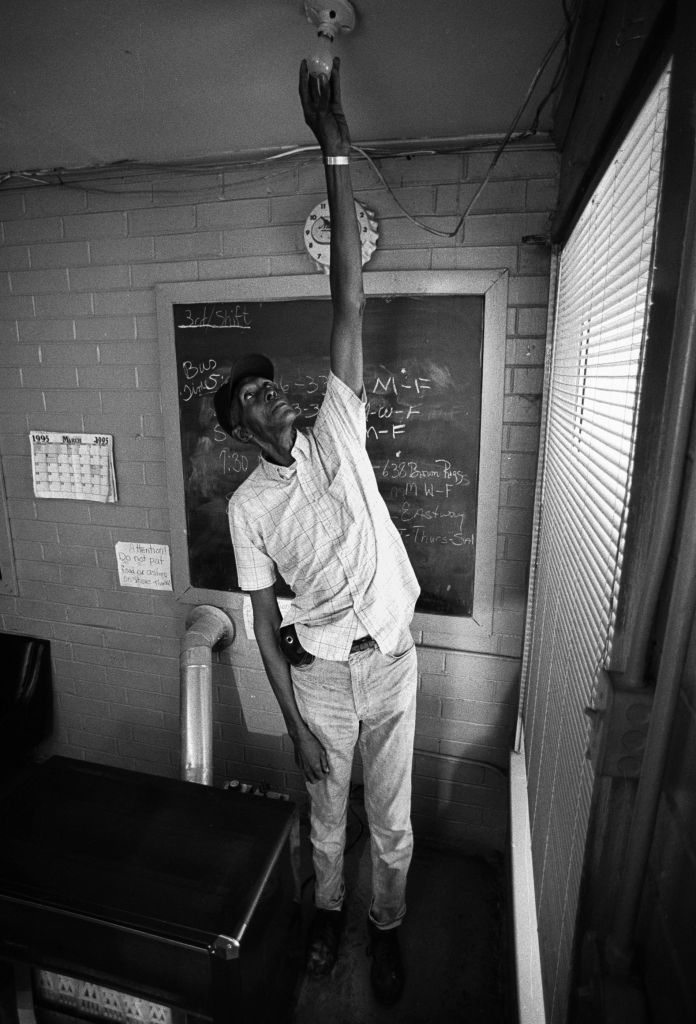 SALISBURY — Once Wilbert Torrence Sr. is buried in Oakwood Cemetery on Sunday afternoon, it will mark a whole week since his death.
Sherry Hargrave at Rowan Funeral Services says a special casket — a longer one — had to be ordered for the 84-year-old Torrence, who was almost 7 feet tall.
When Torrence died, someone called the Post and referred to him as “the tallest man in Rowan County.”
Throughout most of his adult life, Torrence heard the inevitable comments about his height:
“How’s the weather up there?”
“How tall are you?”
“Do you play basketball?”
Torrence handled the interrogations with patience and, no, he never played basketball.
“He enjoyed it,” says son Wilbert Torrence Jr. “He liked the attention. His height never did bother him.”
Truth be known, Wilbert Jr. says, his father actually measured 7 feet tall but always told people he was 6 feet, 111/2 inches.
You can imagine how he stood out physically no matter what he did — bowling, shooting pool, working on cars, racing at local drag strips, going back to school as an older man or driving a cab for Safety Taxi for decades.
Wilbert Jr. says there was a time when most every police officer, sheriff’s deputy and highway patrolman knew his father from his days of driving for Safety Taxi.
Maybe even more people recognized him from Woodleaf Lanes, where he seemed to be a fixture. Torrence was an accomplished bowler and someone willing to share his considerable knowledge on rotation, hitting your marks, picking up spares and how to combine balance, footwork, swing, rhythm, posture and release.
“He took new bowlers and made them better bowlers,” says Henry Lamb, assistant manager at Woodleaf Lanes. “I would hate to guess, but I bet through the years Wilbert taught 200 people. That’s why he had the nickname ‘Coach.’”
Wilbert Jr. says his father was a lovable man with a good heart,
“He would give you the shirt off his back,” the son says. Wilbert Jr. remembers how his father would drive people to work in the morning in his Safety cab, though they told him they couldn’t pay the fare right away.
The son also remembers riding with Wilbert Sr. in the taxi, picking up the oldest child of families in the public housing projects and taking them to the grocery store to buy food.
“He was really loved,” Wilbert Jr. says.
Because of his height, Torrence always drove big cars. He found that a Ford LTD or Crown Victoria fit him best.
ggg
When his father suffered a back injury, Torrence quit school in the seventh grade and went to work to support a family that included three sisters at home. In his early jobs with Bradshaw Construction, Torrence helped to paint the downtown water tower and construct buildings on the Catawba and Livingstone College campuses.
As the years went by, he also worked on a city garbage truck, drove a truck for a produce company and held a job at the Fiber Industries plant. From 1976 until he couldn’t drive any longer, Torrence also drove for Safety Taxi.
Because of his knowledge of cars, friends often depended on him to be their mechanic. Wilbert Jr. says his father also liked to rebuild cars and get them ready to race at local drag strips such as Mooresville and Farmington.
As a 62-year-old, Torrence went back to school, first earning the equivalent of a high school diploma, then graduating from Rowan-Cabarrus Community College’s auto mechanics program.
When he wasn’t working or bowling during that period, he was studying and going to classes.
Lamb, the assistant manager at Woodleaf Lanes, says Torrence kept bowling until about a year ago. Even as a man in his 70s and 80s, Torrence could still average scores around 180, Lamb says.
When he was younger, Torrence drove to many weekend bowling tournaments in various states, sometimes placing and bringing home trophies and cash. Lamb says Torrence’s dashboard on his taxi had a bowling trophy glued to it.
“You knew you had to bring your ‘A’ game,” when Torrence was in a local tournament, Lamb adds.
ggg
Over the past year, Torrence often called his friends at Woodleaf Lanes to say he would soon be back, but he never made it. The bowling center’s staff knew he was sick, and league bowlers kept asking, “How’s Mr. Wilbert” or “Have you heard from Coach?”
His death last Sunday was still a shock, Lamb says.
Woodleaf Lanes has been taking up a collection to help the family with funeral expenses.
“Honestly, he was just a great guy,” Lamb says. “It won’t be the same here without him.”
There was as definite tallness in Torrence’s ancestry. His father stood 6-10, for example. Wilbert Jr. laughs when he says he’s only 6-6.
Survivors include Torrence’s longtime wife, Barbara. A visitation will be held a half-hour before a 2 p.m. Sunday service at Rowan Funeral on North Long Street.
Contact Mark Wineka at 704-797-4263, or mwineka@salisburypost.com.