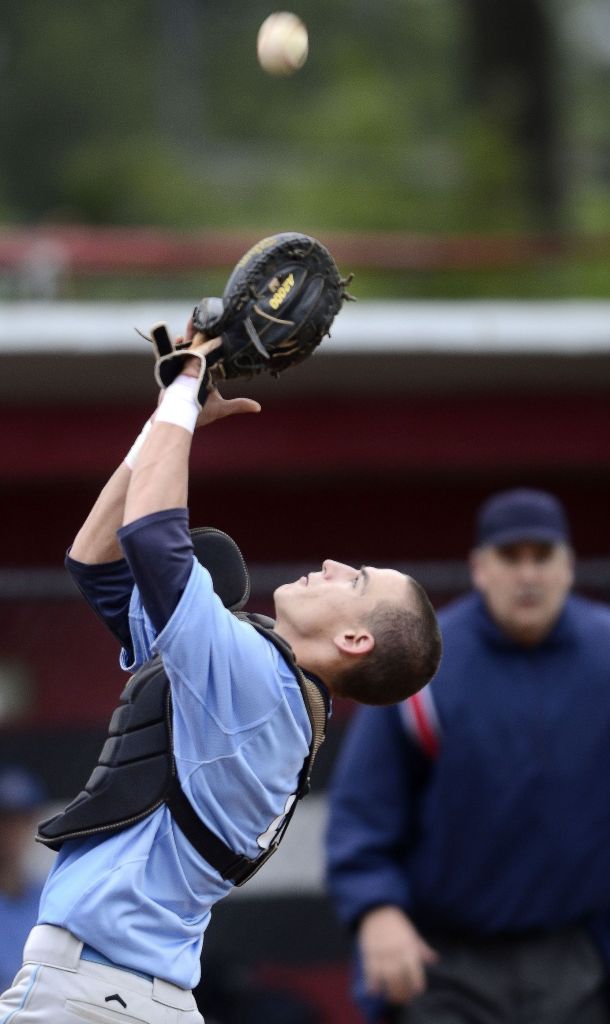 MOUNT ULLA — One of the good things about having a ball-playing older brother is that you get to play in games with the older kids sometimes and you develop a little faster.
Having a ball-playing older brother also can provide challenging moments. You could ask West Rowan catcher Michael Pinkston about that.
Pinkston’s brother, Andrew, played for the Falcons seven years ago, and one of his friends and teammates was Rowan County Co-Player of the Year Weston Church.
“They’d let me play with them, and they didn’t let up on me any just because I was younger,” Michael said. “I was trying to catch Weston one day and he threw a ball that busted my lip. I was bleeding pretty bad, but my mom came and wiped off the blood, and I went right back in there.”
Despite a little blood spilled along the way, Pinkston’s career has turned out OK. He has committed to play baseball for Guilford next season and he should have a strong summer as a returning player for the Rowan County American Legion team.
“All in all, having an older brother really helped me out,” Pinkston said. “I got a lot of experience I wouldn’t have gotten.”
Pinkston recently completed a fine high school season in which he batted .437 and reached base on more than half of his plate appearances. He walked more than he struck out, and when you’re doing that, it means you’re making some real strides as a hitter.
“My junior year I started slow, but then I picked it up late,” Pinkston said. “I had a really good fall. Then this year things kind of clicked and fell into place from the start. I’ve figured out what kind of hitter I am. I realize I’m not going to hit home runs. I just want to stay on the top of the ball.”
A three-year varsity starter, Pinkston had four three-hit games against SPC opponents this season and he also produced six two-hit games. He hit a steady parade of singles and three doubles.
“He’s had a really good year, and I’m excited he’s got an opportunity to play in college,” West coach Chad Parker said. “He’s caught 98 percent of our games the last three years, so he’s earned it.”
The physical demands of catching — catchers are always weary, bumped and bruised when they step to the plate — usually make hitting much tougher, but Pinkston, whose favorite player is thumping St. Louis catcher Yadier Molina, sees some offensive advantages in his craft.
“If you go to the plate thinking like a catcher, it can really help you,” Pinkston said. “You should be able to figure out how they’re going to pitch you, what pitch they’ll throw in a certain count.”
Pinkston loves catching, and always has.
“I’ve got some early memories of me walking around at my brother’s ballgames with a football helmet on my head,” Pinkston said. “I’ve always wanted to be the catcher. Even in T-Ball, I was the catcher. I especially like it now that I’m calling pitches. You’ve really got a lot of control of the game.”
Pinkston has benefited from catching three college-level pitchers at West — Michael Ball, Omar Bautista and Nick Collins, and in turn, he’s helped them.
It was in a game last fall that Guilford saw Pinkston. Pinkston’s fall team, coached by East Rowan’s Brian Hightower, played at Guilford. That’s when the recruiting process and communication started.
Pinkston always has made good grades, and that’s helped him. As a Division II school, Guilford can’t offer an athletic scholarship, but it can put together academic-based aid packages for good students that help make college affordable.
Many Rowan County fans will remember Nathan Fulbright, the East Rowan catcher who has played two seasons at Guilford and has performed very well. Fulbright hit .312 this season.
It’s going to be a positive thing having Pinkston coming in behind Fulbright. They already know each other and they can push and support each other.
“It’s going to a challenge, but I’m looking forward to it,” Pinkston said. “The last three years here, I’ve kind of been the only catcher. I’m not going to be the only guy anymore.”