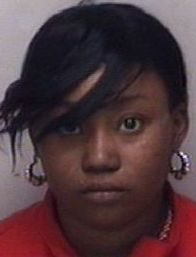 Authorities charged two teens with drug possession while inquiring about an improperly parked car Friday morning in front of a West Harrison Street home.
Salisbury Police charged Krys’tina Michelle Ripley, 16, of the 300 block of Cotton Grove Road, Lexington, with felony possession of a controlled substance schedule I, and Kyshawn Quandarious Robinson, 18, of the 200 block of West Harrison Street, with felony possession of a controlled substance with intent to manufacture schedule VI and misdemeanor possession of drug paraphernalia.
Members of the Police Interdiction Team were on patrol in the 200 block of West Harrison Street when they spotted a car parked illegally with its left wheel to the curb. The officers asked a group of teens on the porch of the house if they knew the owner of the car. The owner, Narvice Kerns, eventually came out of the house, opened the door to move the car and officers smelled marijuana coming from it. Robinson admitted he’d smoked marijuana earlier. The officers asked to search the car and home after they saw a bag of marijuana on the porch. Kerns did not give police consent to search, but they did obtain a warrant.
Ripley had three ecstasy pills in her purse and Robinson admitted to having a marijuana grinder, some marijuana and $367 under a mattress in his bedroom. Police said Robinson was cooperative. Kerns, 32, was cited for simple possession of marijuana. Police seized a total of 10 grams of marijuana.
Ripley and Robinson were each issued a $5,000 secured bond and have since been released from the Rowan County Detention Center.
In other police news:
• A man reported someone stole the tailgate from a company truck for Variety World that occurred sometime between 5 a.m. Sunday and 8:17 a.m. Tuesday in the 2600 block of Statesville Boulevard.
• A man reported Wednesday someone damaged his window in the 1100 block of Crosby Street.
• A man reported a burglary occurred sometime between noon Sunday and 3:15 p.m. Wednesday in the 1200 block of Arden Drive.
• A woman reported her service dog was stolen on April 19 from the 2400 block of East Innes Street.
• Damascus Church reported a larceny occurred May 6 in the 1200 block of Butler Street, East Spencer.
• Someone stole pallet shelves from the Supply Source sometime between May 9 and Thursday in the 100 block of Cedar Springs Road.
• A man reported Thursday a breaking and entering occurred sometime between May 1 and Thursday in the 900 block of Sunset Drive.
• A man reported a larceny Thursday in the 400 block of Messner Street.
• Shamari Lakevin Spears, 26, was charged Thursday with misdemeanor violation of domestic violence act in the 200 block of North Main Street.
• Kenneth Eugene McDaniel, 23, was charged Thursday with felony possession of a controlled substance with the intent to manufacture a schedule II in the 100 block of East Kerr Street.
• Isabel Pleitez, 51, was charged Thursday with felony hit and run injury in the 1200 block of Mirror Park Drive.
Contact reporter Shavonne Potts at 704-797-4253.