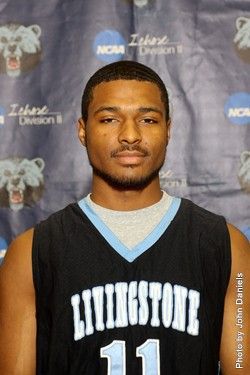 Livingstone basketball guard Mark Thomas is the Blue Bears’ first ever CIAA Male Scholar-Athlete of the Year.
Thomas adds to a long list of preious accolades. He was named CIAA Player of the Year and CIAA tournament MVP. He’s been named to the All-CIAA first team and All-Atlantic Region team, the National Association of Basketball Coaches All-District first team and the Boxtorow DII All-America team.
Thomas recently graduated Summa Cum Laude from Livingstone with a degree in business administration.
Byrond “Hut” Smith will be the head coach for the Mooresville Post 537 Legends baseball team this summer.
Smith, 40, was a fourth-round pick by the Baltimore Orioles in 1992 after an outstanding career at A.L. Brown. A 6-foot-3, right-handed pitcher, Smith pitched in pro ball from 1992-2003. He reached the Double A level for several seasons. He pitched for minor-league teams in the Baltimore and Philadelphia organizations and played independent ball.
Smith won 53 pro games and struck out 696 batters.
His best season was in 1997 when he had a 9-5 record with 123 strikeouts for teams in advanced A and Double A.
• Rowan County is scheduled to open the season at home on May 18 against Mooresville Post 66.
Salisbury lost 15-0 to West Davidson in a CCC semifinal game on Thursday.
The Hornets will be in the playoffs next week as the CCC’s No. 3 seed.
The Peach Belt Conference tournament will be held this weekend at USC Aiken.
Lander (44-6) is the top seed for the PBC tourney and the likely host for the Southeast Regional.
Catawba will play in the SE Regional May 15-18.
The D-II World Series will be held in Cary on May 24-31.

Erwin won 4-3 against China Grove. Will Brown was the winning pitcher. Brown also homered to lead off the game. Chandler Antosek, Hayden Setzer, Mathew Mathis, Corbin Moss and Jax Fitz had two hits apiece for the Mustangs.
• In a 10-2 win against Knox, Setzer pitched five innings for the win, and Trevor Scruggs finished. Brown led the Eagles offense with three hits including a two-run homer and a double. Matthew Mathis had two hits. Setzer also homered.
• West Rowan finished the regular season with a 15-0 win over China Grove.
Dillon Simpson had two hits, including a long homer. Owen White was the winning pitcher. The Bulldogs will start play in the conference tournament on May 17.
Knox defeated Erwin 6-3 on Thursday. Singles winners for the Trojans were Simon Post, Roarke Burton, Cole Goodnight and Cristian Gonzalez. Doubles winners for Knox were Post-Goodnight and Burton-Gonzalez.
Knox was 13-1 and tied for first in the conference.
Corey Seager (NW Cabarrus) is batting .308 with two homers and 14 RBIs for Rancho Cucamonga.
• Whit Merrifield (Davie) has batted .378 in his last 10 games for Northwest Arkansas.
• The Kannapolis Intimidators were fogged out in Lakewood on Friday.