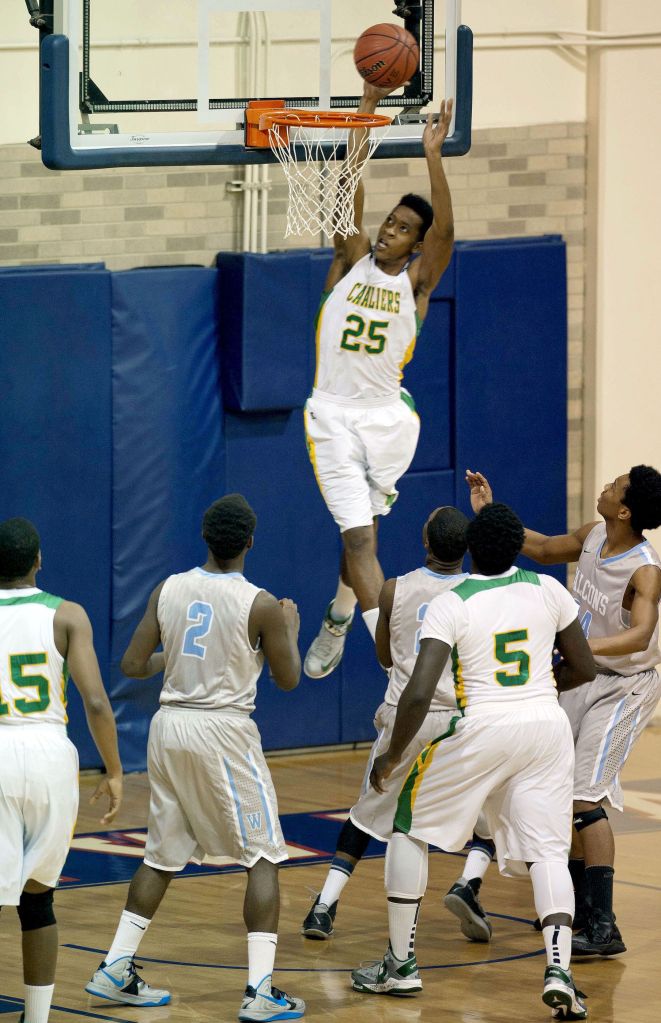 SPENCER — As North Rowan graduate Malik Ford picked up a pen to sign with Johnson C. Smith, coach Andrew Mitchell raved about Ford being not just a possible next-level guy but a possible watch-him-on-TV guy.
When Mitchell used Malik Ford and Scottie Pippen in the same sentence no one in the North media center laughed, because no one doubts Mitchell’s basketball knowledge and no one who has seen Ford play can deny that there’s some serious stuff there.
“Malik has been trying to make his decision for a while and when he decided on Johnson C. Smith, I told him that if he’ll make up his mind not to get outworked by anyone, if he works hard every day, he can go as far as he wants to go,” Mitchell said. “With all my heart, I believe that.”
In other words, Ford, who graduated from North in 2013 and played this past season at Thomasville Prep, has potential and to have potential is both a blessing and a burden that comes with huge expectations.
There always have been lofty expectations for Ford because he is 6-foot-8, and 6-8 gives you a head-start on the basketball court.
He isn’t just a big guy. He has the spring of a 5-8 guy. He cleared 6-4 for second place in a state track meet two springs ago.
He’s agile, not clumsy. He’s fluid, not mechanical. He’s not a great shooter, but it’s not like he’s a bad shooter. He makes dunks, he makes stickbacks, he makes free throws, and he makes short jumpers.
He is a good guy, smart, personable and coachable and a solid teammate.
If there’s a flaw, it’s that he may be a little too laid-back, but don’t mistake niceness for weakness.
“Malik has raw power,” Mitchell said. “He can finish against anyone.”
A four-year varsity player at North, Ford was all-county three seasons. His per-game scoring averages improved annually from 4.3 to 7.2 to 8.5 to 9.3. His career highs advanced each season — from 12 to 18 to 20 to 24.
He scored 792 career points, finishing as one of North’s all-time top 20 scorers, and yet it always seemed like someone with his size and ability should be scoring a whole lot more.
There are reasons why he didn’t. First, he played with a lot of other talented guys. Second, an ankle injury his senior year cost him seven games and limited him in some others. Third, his four years at North coincided with North’s four years in 1A. Albemarle was solid, West Montgomery was talented, and South Davidson had two strong teams, but for the most part, the Cavaliers, who went 60-4 in 1A YVC league games, overmatched opponents to the point where Ford was playing only half the game.
So here he is now, ready for college, after a tough year at Thomasville Prep.
“It was a rough year because we lost a lot,” Ford said. “But it’s made me mentally tougher, and I was able to stay focused on the big picture, There was interest from Jacksonville and from USC Upstate and from Queens and a lot of other D-II schools, but Johnson C. Smith has stayed interested in me every day for the last two years. They stuck with me when some others came and went.”
Ford drew a lot of looks from a lot of places, but D-II J.C. Smith in Charlotte had the most positives.
It’s close, and his North teammates T.J. Bates and Michael Bowman already have signed with J.C. Smith’s Golden Bulls.
“My teammates are my best friends,” Ford said. “We’ve always had a bond, and when you’re playing with your friends, the basketball part is second nature.”
Ford and Bates have been teammates since middle school, while Bowman, who will graduate soon from North, is a year behind them.
“Colleges won’t usually take three guys from one high school, so that makes me feel proud,” Mitchell said. “All three are exceptional young men.”
Mitchell actually began his college coaching career as a J.C. Smith assistant. HIs journey led from there to Livingstone to coach the women, to Salisbury to coach the girls, and now to North Rowan, where his boys teams have become a factor on the state level. Ford, Bates and Bowman were part of North’s 1A state-title team in 2011.
J.C. Smith coach Steve Joyner and assistant Mark Sherrill have a reputation for developing players, so it’s going to be interesting to watch how much Ford grows as a player.
“Coach Joyner is the Andrew Mitchell of the CIAA,” Ford said with a smile.
Ford provides the Golden Bulls’ coaches with tall, talented clay to mold into something special.
“It’s a blessing to be able to play with Malik again in college,” Bowman said. “We already have chemistry, and if Malik works hard, he can play basketball a long time.”