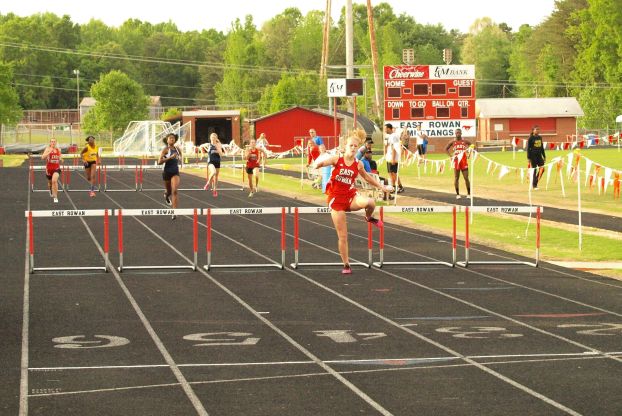 GRANITE QUARRY — Three MVPs at the South Piedmont Conference girls track were handed out for sprints, distance runs and field events, and the system employed was as objective as it could be.
It was based purely on points produced, not politics, and Concord freshman Millie McCoy (sprints), West Rowan sophomore Khaila Hall (field) and Northwest Cabarrus senior Maddie Lowe (distance) were all worthy award-winners.
Still, the girl who shined in the most ways was East Rowan senior Tori Gaul, who won the pole vault, won the 300 hurdles, placed fourth in the 200 and anchored East’s victory with a powerful leg in the 4×400 relay, where she followed Haley Lyerly, Taylor Hodges and Brittany Small onto the track. That race ended Gaul’s long day and East’s silver-medal effort.
Gaul wasn’t an MVP only because sprints, distance and field are calculated as separate categories, and she racked up points for the Mustangs in events that fell into both the field and sprint divisions.
“So maybe I was the overall MVP today,” Gaul said with a laugh.
There was no maybe about that.
“I think I could put Tori in any event and she’d place,” East coach Rebecca Cooper said. “This was only the third time she’s run the 200 in a meet, but she placed.”
Gaul, who has signed with Carson-Newman, broke East’s school record in the 300 hurdles in a Thursday heat. That mark didn’t last more than 24 hours. She broke her own record Friday with a blazing time of 47.31.
Gaul’s victory in the pole vault was amazing in that she first tried it two months ago. Gaul’s gotten an assist in that event from her boyfriend Marshall Shank, who was the boys gold-medalist on Friday.
“Tori was just kidding around with it to start with, but she’s been going with me to my coach (Eric Morell) in High Point,” Shank said. “She’s a great athlete. She’s tied the school record already.”
The Gaul-led Mustangs still couldn’t overcome Northwest Cabarrus’ army of distance people. Northwest finished with 111 points to top East (99.5), Hickory Ridge (76), West (74), Concord (61) and Cox Mill (49).
“Northwest was just too strong in the distance,” Cooper said. “I spent three days crunching the numbers, and I knew it was going to be tough for us to beat them. They didn’t just win the 800, 1600 and 3200, they were getting three high finishes.”
West’s Rebecca Parker interrupted the Northwest distance domination with second-places finishes behind Lowe in the 1600 and 3200, but the Trojans grabbed 60 points in the three long individual runs and tacked on another 10 by taking the 4×800 relay. That was just too much.
Parker was as busy as the rules will allow and also helped West finish second in the 4×800.
In the 1600, Parker nipped Northwest’s Kara Dunkle for second place by nine-hundreths of a second and stomped on the finish line before collasping in exhaustion.
“I was seeded fourth, but I don’t like to finish fourth,” said Parker, who is headed for Georgia Southern. “That was the most exciting finish I’ve had in a while.”
The meet was conducted over a two-day period, and that was a benefit to athletes like Parker, who compete in the maximum four events.
Parker’s teammate Hall won the long jump Thursday and the triple jump Friday.
“My first three jumps today I kept getting better and better,” said Hall, who won the triple with an effort of 37 feet, 3 inches. “But then my legs got tired, I really felt like I did terrible, but I won.” Hall won by almost 4 feet, so “terrible” is relative.
West’s Alison Manley won the shot put, topping East’s Melonye McCree by a foot.
The sprints belonged to Concord’s McCoy and Central’s Jada Wallace.
“A lot of the Cabarrus schools had good sprinters,” Cooper said. “We uusually get points in the sprints, but they made it tough for us to get those fourths, fifths and sixths that help us out.”
South got a second from Brittany Luckey in the pole vault and Dakotah Lambert had thirds in the pole vault and 100 hurdles.
East’s Small was second in the high jump to Hickory Ridge’s Elizabeth Oleson, who cleared 5-6.
East’s point total also was boosted by Jocelyn Lowe, a slim 120-pounder who managed to finish second in the discus to Northwest’s Victoria Friel.
“The Northwest girl was really good,” Lowe said. “I work hard at discus, and I’ve got good form. That was a personal record for me today.”
East set records and West made a valiant effort, but Northwest’s girls left everyone in the distance.
•

NOTES: East’s Taylor Kirk won the wheelchair shot put. … All the scorers for girls and boys will be listed in Sunday’s Scoreboard.