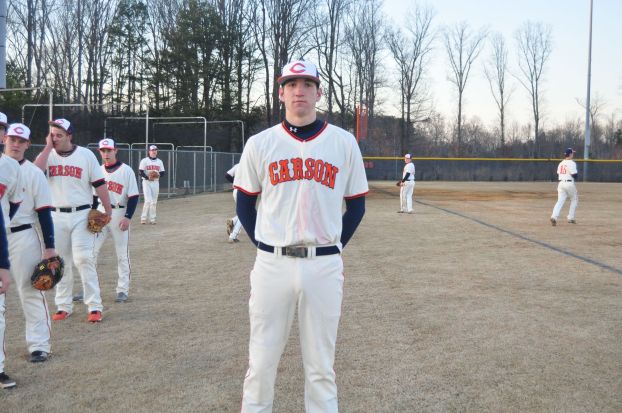 CHINA GROVE — With nine Carson baseball players taking the field for their final regular season home game, the odds are pretty high for an emotional Senior Night.
Instead, the Cougars turned in a very steady, lunch pail kind of performance, using timely pitching and defense to shut out Cox Mill, 5-0, here last night.
Carson secured second place in the South Piedmont Conference with the win, the 13th in its last 14 outings.
Now 19-5 overall and 12-4 in the league, Coach Chris Cauble’s team will play at home in the SPC Tournament first round next Tuesday.
Carson also topped Cox Mill Tuesday, 6-3. The Chargers fall to 17-6 and 10-6 in the conference.
“Cox Mill is a very good team and we just really wanted to prove ourselves against them this week,” said Cauble. “We kind of dug ourselves a hole early in the year but our kids are really starting to ban together and hitting it a little better and still pitching it pretty good.”
Senior right-hander Colton Laws was admittedly not at his best, but made key pitches when he had to and the Cougars turned two double plays behind him.
Laws labored with 67 pitches through five innings, yielding five hits and two walks. However, Laws also struck out five Chargers.
“With all the senior night stuff, I only had about eight minutes in the bullpen, so I felt a little rushed to get warm,” said Laws. “So early, I was leaving pitches up but luckily I had great defense behind me.”
Cox Mill had three singles in the second inning but Laws himself fielded a sacrifice bunt attempt and threw out lead runner Julian Smith at third base.
Despite two more hits that inning, the Chargers could not break through as Laws struck out Evan Kern and induced a ground out from Kyle Lowke.
Carson took a 2-0 lead in the bottom of the second inning, although it started out a possible huge frame.
Bruson Prugh led off with a single, Michael Morrison walked and then Laws bunted for a single, loading the bases with no one out.
Cox Mill pitcher Austin Fox made a great play on a low pitch that got away but bounced toward the mound. Fox fielded the ball and dove forward, tagging Prugh, who was trying to race home.
Saul then drilled a shot to leftfield, but the ball was dropped by Evan Tortorelli, allowing Morrison to score the game’s first run. Brandon Sloop followed with a sacrifice fly, scoring Laws.
Sloop also had the key hit in Carson’s three-run fourth-inning that broke the game open.
Morrison led off the fourth with a double but was nabbed at third base on a fielder’s choice. With two outs and two on, Sloop came through in the clutch with a booming triple over the centerfielder’s head.
Sloop himself scored when the relay throw to third base bounced away and all of a sudden, it was 5-0.
“That triple felt great, because we really wanted to win this game for the seniors,” said Sloop, a junior. “It was fastball up and away and I just went with the pitch. I knew that I hit it pretty good.”
Sloop led the Cougars at the plate with the three runs batted in.
Laws retired the Chargers in the top of fifth inning, thanks in part to a nifty strikeout-pickoff. Laws fanned Lowke and catcher Prugh snapped off a perfect throw to first baseman Heath Mitchem, picking off Kern.
Senior John Daugherty pitched the final two innings for Carson, retiring six of the seven batters that he faced.
Cox Mill’s Chris Wright was the only player in the game with two hits.
“I feel good about where we are right now,” said Cauble. “Cox Mill hits it well and has two stud pitchers, so winning both games from them this week has been big for us and hopefully, will propel us into the tournament with some momentum.”
Fox pitched well in defeat, going six innings and only allowing three earned runs. Three of his seven strikeouts ended innings, stopping Carson rallies.