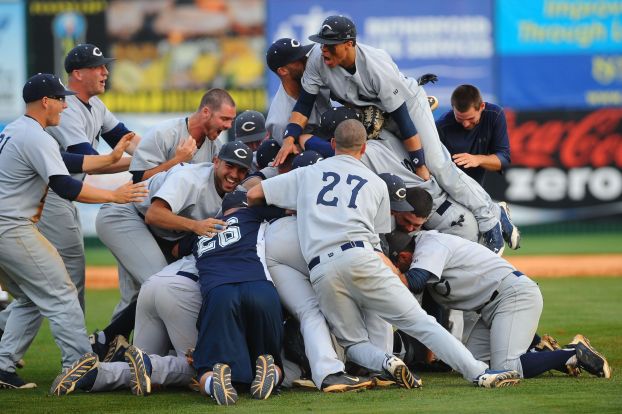 FOREST CITY — Craig Brooks said he was surprised when they called him out to receive the MVP trophy for the SAC tournament, but it was probably the least surprising announcement in sports history.

Then he went back out to the mound at Forest City’s McNair Field and put up six more zeros Sunday as Catawba rolled 10-0 against weary Wingate in the tournament championship game.

Wingate had to beat Tusculum earlier Sunday to make it to the final in the double-elimination event.

“I haven’t really pitched on two day’s rest much, but I felt great,” Brooks said. “I wanted the ball. I was ready to take the ball.”

Catawba’s surge to a 32-17 record, a SAC regular-season co-championship, the SAC tournament title and the berth in the Southeast Regional (May 15-18) that goes with that title, has been a team effort, but it’s been spearheaded by All-SAC pitchers Brooks, Shaefer Shepard and Ryan McClintock.

Brooks, 0-2 when Catawba started this season 1-7, won his 12th straight decision on Sunday.

“(Catcher) Jon Wallace said my fastball was still pretty firm,” said Brooks, who throws gas in the 90s. “So we worked off that like we always do.”

Catawba’s hitters, who struggled Saturday night and won 1-0 despite striking out 17 times, made this one easy for Brooks with eight runs in the second inning.

Brooks walked a batter early, but Wallace erased that runner on a strike ‘em out-throw ‘em out double play to end the bottom of the first.

“I thought that was the play that really got us started,” Brooks said. “Then we got the bats going.”

Ethan Satterfield’s double on a 1-2 pitch ignited the big inning, and T.J. Wharton sent a run-scoring single whistling up the middle before Julio Zubillaga followed with another single.

“Their pitcher wasn’t getting his curve over, so were able to sit on fastballs,” Catawba coach Jim Gantt said.

Wallace executed on a sacrifice bunt that advanced both runners, and Cameron Beard drove in two runs with an opposite-field single that made it 3-0. Then No. 9 hitter Dylan Richardson singled to knock out Wingate starter Ryne Poplin.

Reliever Patrick Haynes got Blake Houston to ground out, but a walk to Paul Kronenfeld filled the bases, and a walk to Keaton Hawks forced home the run that made it 4-0.

Satterfield then hit a ball to the shortstop for what looked like a certain out three, but Hawks beat the flip to second base. That made it 5-0.

“That was very big,” Brooks said. “Hawks got a great jump, and it just shows what hustle can do. That play extended the inning.”

Hawks’ hustle allowed Wharton to bat for the second time in the inning, and he’s a masher with a quick, powerful swing. He roped a double down the left-field line, and suddenly it was 8-0.

“After that eight-run inning, we were sitting good,” Brooks said. “There was no doubt we were going to win, but I still went out there and pitched like it was 0-0.”

Wingate (31-16) is very good and shared the SAC’s regular-season crown with Catawba, but the Bulldogs had very little success against Catawba pitching this season.

“They got two runs when we misplayed a flyball in the first inning and beat us down there,” Gantt said. “But we’ve pitched a bunch of scoreless innings in a row (24) against them since then.”

Catawba won four of five from Wingate this season. Both of Wingate’s tournament losses were to Catawba.

The Indians went 4-1 in the tourney, bouncing back from a draining Friday loss to Newberry that put their backs to the wall early.

“The saying we all were retweeting was that if it’s worth having, it’s worth fighting for,” Brooks said. “We kept fighting, and we had great pitching performances from a lot of guys.”

“And he wanted to pitch the seventh,” Gantt said. “But he’d done enough.”

Joe Watson kept the shutout going in the seventh and eighth. McClintock handled the ninth.

“Coming back in this tournament is kinda the way it’s been for us all season,” Gantt said. “I’ve been saying it for a while now, but it’s true. Don’t ever give up on this team. You can never count these guys out.”

FOREST CITY, NC — Catawba jumped out early and went on to post a 10-0 shutout of Wingate to win the 2014 Food Lion SAC Baseball Tournament Championship on Sunday afternoon at McNair Field. The Catawba Indians improve to 32-17 and earn the league’s automatic berth into the NCAA II Southeast Region Tournament. The Bulldogs fall to 31-16.

Catawba had a huge top of the second inning, scoring eight runs and cruised to the win. T.J. Wharton (Lutz, FL/Bishop McLaughlin HS/Guilford Tech) got it started as he singled home Ethan Satterfield (Madison, NC/McMichael HS), who had led off with a double. Cameron Beard (Conover, NC/Bunker Hill HS) singled home two runs to make it 3-0 and there was still just one out.

Keaton Hawks (Lexington, NC/E. Davidson HS) walked to drive in a run and beat a force play to second to push the margin to 5-0. Wharton capped the inning as he cleared the bases with a double and the 8-0 margin. That was all that the Catawba pitching staff would need as they shutout Wingate for the second straight game, finishing the tournament with 21 straight scoreless innings.

Wharton had three hits and three RBI for the Indians. Hawks and Dylan Richardson (Randleman, NC/Randleman HS/Appalachian St.) each had two hits.

The tournament championship marked the sixth for the Catawba program, who shared the regular season title with Wingate.

The victory gives Catawba an automatic bid to the 2014 NCAA Tournament. The Indians handed Wingate both losses in the SAC Tournament. The Bulldogs opened the tournament with an 8-7 win over Tusculum on Thursday and a 6-2 victory against LMU Friday night. Catawba edged Wingate 1-0 in 12 innings Saturday night, while the Bulldogs responded with a 3-0 victory earlier Sunday against Tusculum.

The Bulldogs were held to six hits on the afternoon, with six different players collecting singles for Wingate. Senior outfielder Eric Serra (Miami, Fla.) was one-for-three with a walk, while freshman Shane Billings (Kernersville, N.C.) and senior Matthew Barrier (Mt. Pleasant, N.C.) each went one-for-two for the Bulldogs.

After a scoreless first inning, Catawba sent 13 hitters to the plate in the second, scoring eight runs on six hits. Satterfield started the frame with a double, then scored on an RBI single from Wharton. Beard added a two-run single, while a bases-load walk and RBI groundout made it 5-0. Wharton’s two-run double made it 7-0, while a Wingate error on the play allowed the eighth run of the inning to score.

The Indians plated two more runs in the fifth to make the final margin 10-0. The first run scored on a Wingate error, while an RBI groundout put Catawba on top by 10.

The Bulldogs are back in action Tuesday, traveling to Limestone for a 3 p.m. start. Wingate wraps up its regular season this weekend, hosting Erskine for a three-game series, starting Friday at 6 p.m. The Bulldogs and Flying Fleet play a doubleheader Saturday at 1 p.m.