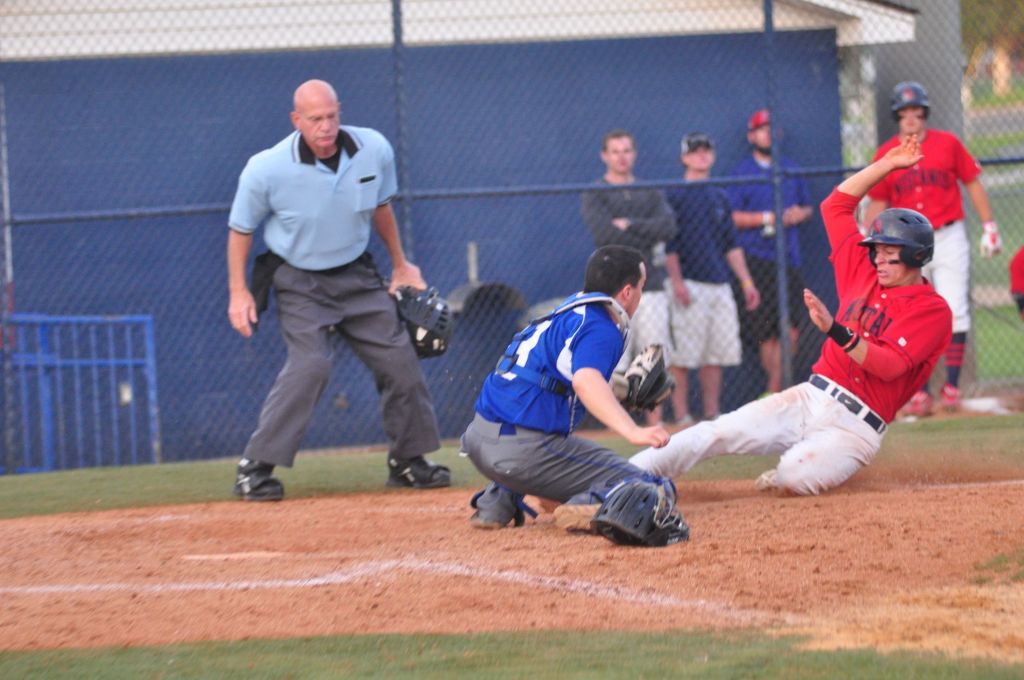 GRANITE QUARRY — In a high school baseball game full of wild moments, a clutch throw after a botched play led East Rowan past Mooresville, 5-4, here last night — the final game of the round-robin East Rowan Spring Break Classic.
Connor Johnson, a lefty pitcher pressed into centerfield service due to an injury, fired a strike to nail Mooresville’s Dallas Jackson at the plate, ending the game as fans from both sides erupted in cheers and groans.
Regular centerfielder Luke Setzer had to catch during the game, due to Saturday morning injury to starter Dustin Ritchie in a win over North Iredell.
Due to the tournament structure, Mooresville was the home team, despite being at Staton Field. Jackson led off the bottom of the seventh inning with a walk from the Mustangs’ closer, Joseph Peeler.
After a perfect sacrifice bunt moved Jackson to second, Peeler got in deeper trouble by walking Mark Miller. Sean Parlee was then retired on a lazy fly ball and East appeared poised to win it as the ninth place batter was due up for the Blue Devils.
Mooresville Coach Jeff Burchett send Cody Maynard up to pinch hit for Wade Cobb. However, Maynard never saw a pitch.
Peeler whirled and fired to second, trying to end the game by picking off Jackson.
The errant throw went into centerfield and then the charging Johnson also bobbled the ball, prompting Burchett to gamble and wave Jackson home.
Peeler recovered in time to fire a strike to Setzer who applied the tag as Jackson slid by the plate.
Jackson, thinking that his missed the plate, dove back onto the plate and was tagged again by Setzer, as both benches erupted.
“The ball was snaking a little and then took a bad hop on me,” said Johnson, about the botched pickoff attempt. “Luckily, I recovered and threw it as hard as I could. I knew I had ‘em”
While East celebrated out near shortstop, several Mooresvile players briefly protested but Burchett immediately accepted the outcome.
“Something crazy is always going to happen when we play Mooresville,” said East Coach Brian Hightower. “It’s always fun playing them. They are well-coached and always bring fans — it was a great atmosphere tonight.”
The Blue Devils had to be frustrated, having outhit East, 9-7, and were the recipient of six walks and a hit batter. Mooresville also had four errors in the field.
“This team finds a way to win,” added Hightower. “We’ve messed up a squeeze play and made some other mistakes, so we’ve got to execute better, but hey, we won two games today and everybody contributed.”
Mooresville left 10 men on base and had runners thrown out at the plate in the last two innings.
The 5-4 lead was preserved in the sixth when rightfielder Ty Beck fielded a one-hop single and uncorked a bullet to Setzer, who tagged out Anthony Fucci at the plate.
That play brought an excited coaching staff out of the dugout to greet the Mustangs running off of the field.
“Coach Kelly Sparger is our outfield coach and those two throws won the game,” said Hightower.
East had built a 5-2 lead in the fifth inning on a single from Michael Caldwell, which was booted by rightfielder Cobb. Ike Freeman followed a Beck sacrifice with a ringing double to score Caldwell.
East had seven hits but just one RBI. The Mustangs scored runs on wild pitches and balks from Mooresville starter Clint Seeley and another on a throwing error.
Leftfielder Scott Sapp had two singles and walk to lead East (16-6) at the plate. Mooresville (10-9) was led by Tommy Bullock who drove in two runs with a single and triple. Jackson and Mark Miller also collected two hits.