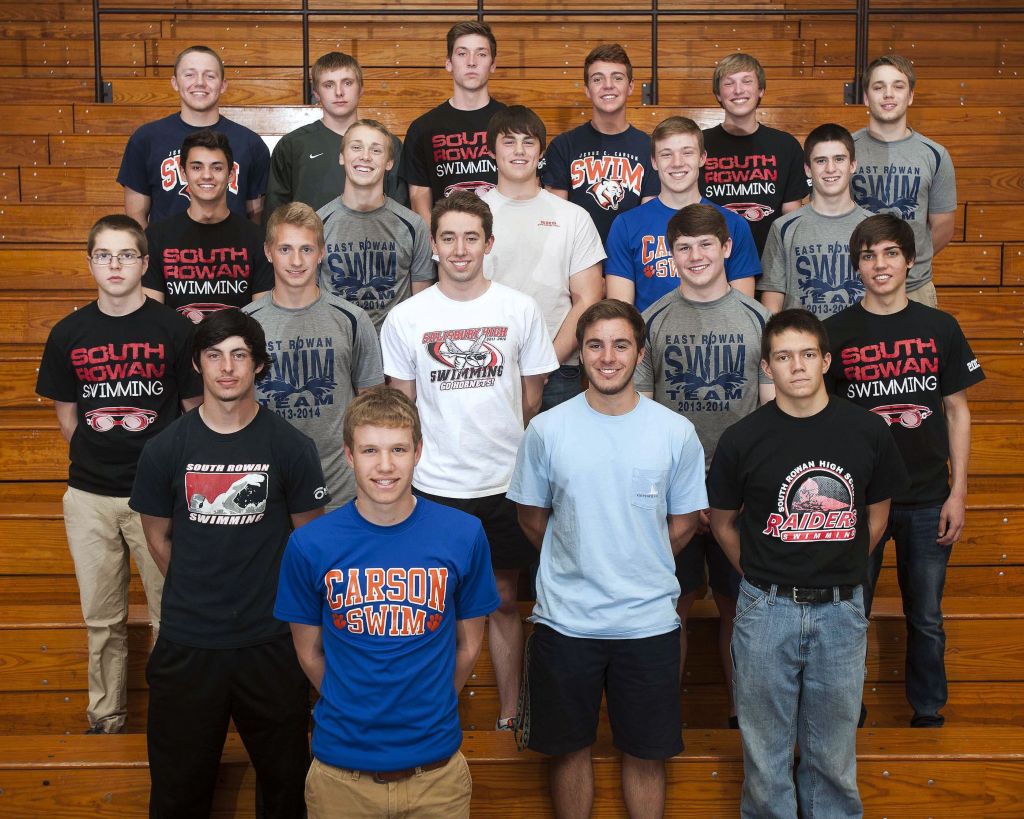 For Carson senior John Patella, this year’s Rowan County Championship swim meet was a long time coming. The 2014 Male County Swimmer of the Year has had to race quite a few big names throughout his career as a Cougar: East Rowan’s Luke Evans and Jason Troutman; South Rowan’s Caleb Helms and Luke Rary; and Salisbury’s Taylor Rodenhuis. With so much talent in one county, Patella always seemed to be the best swimmer that too few people knew about. This season, that changed.
This year’s version of John Patella was the most dangerous man in most pools. He found success in almost every event, and sparked Carson to a narrow win over rival East Rowan in a hotly contested mid-season dual meet.
At the county meet, Patella was a man on fire. In his first race of the county meet, the 200 IM, Patella found himself facing off against Johnston once again. Johnston beat Patella at SPC’s, but this race was different. Patella buried the field over the last 100 yards of the event.
After that, Patella never looked back. He scorched the back half of the 100 freestyle to win the event by 1.07 seconds over East Rowan’s Nathan Leazer – an eternity in such a short sprint. His two wins put him in contention with Rodenhuis for County Swimmer of the Year honors, but he needed a little help from his teammates to get him over the top.
“If it wasn’t for Heath Mitchem, Henry Brown or Ryan Turney, I wouldn’t have gotten this award,” Patella said. “They helped me out big time in the 200 free relay.”
Indeed they did. Patella was the first leg of the relay, establishing a solid Cougar lead. For a hundred yards that lead remained intact as Turney and Brown swam solid splits to keep Carson on top. But it was the anchor leg, Heath Mitchem, who Patella referred to as his “biggest competition, in practice or in a meet,” that sealed the deal against a hard charging Reagan May from South Rowan. Patella’s relay held on for a victory of four tenths of a second – and Patella emerged as the consensus choice for the county’s top award.
But if Patella needed the help of his teammates to garner the honor, it was help he earned. More than any other swimmer in the county, he has been a transformative athlete for his team over the past four years.
“My first year swimming, Carson practiced with South because we were so small,” Patella remembered. “By my senior year the team had grown tremendously and we were pretty good.”
A lot of that growth is due to Patella himself, though he is quick to give credit to his coaches, Andy and Karie Houck, as well. A leader on the pool deck and in the water, Patella is the kind of athlete around whom programs are built, the kind that brings friends – like Mitchem – to the pool with him, the kind that causes opposing coaches to lose sleep at night. As he graduates, Patella has finally left a mark just as powerful as those of the great swimmers he raced earlier in his career. He leaves behind a program that finished 26th in the state on the strength of that same 200 free relay that took home the county win. Of that, of his title as County Swimmer of the Year, and of so much more, John Patella can be proud.
•

Mitchem, Brown and Turney joined Patells on the All-County team by virtue of their win in the 200 free relay. Turney also qualified in the 100 backstroke.
•
Despite only winning 1 event, South Rowan placed the most swimmers on the All-County team with 7 honorees. Dustin Jenkins (200 free, 500 free), Andrew Perry (500 free), Reagan May (50 free), Tyler Fuller (50 free, 100 free), Nathan Shorter (100 breaststroke), Stetson Johnston (200 IM, 100 backstroke) and Steven Lyons (100 butterfly, 100 breatstsoke) all made the team.
•
There was more parity on the boy’s side than the girl’s, as East Rowan placed 6 athletes on the team. Jason Troutman and Charles Goff led the Mustang contingent with 1 individual win apiece. Caleb Beaver (200 free) and Nathan Leazer (100 free) also merited the honor on the strength of individual events. Robert Egloff and Drake Adams took part in the winning 200 medley relay.
•
Salisbury’s Taylor Rodenhuis dominated both his events – the 200 free and 100 fly – to make the All-County team for the 4th year in a row, but did not have the relay success to defend his title as last year’s County Swimmer of the Year. Matt Woolly also made the team in the 100 breaststroke.
•
Cody Dollarhide was North Rowan’s lone honoree, finishing 3rd in the 200 IM and winning the 500 freestyle. West Rowan had no representation on the All-County team.