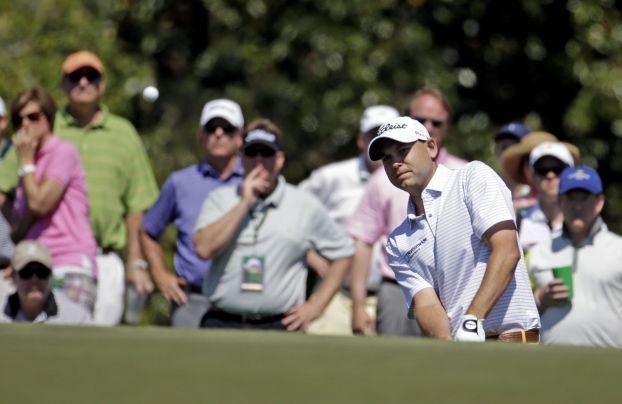 AUGUSTA, Ga. — With dad in his ear, Bill Haas turned in the best round of his Masters career Thursday.
Now he wants to do what his father never could — finish the job.
Haas birdied the final hole for a 4-under 68 and the opening-round lead, the first time he has broken 70 in five appearances at Augusta National.
His father, Jay, played in the Masters 22 times, with five top-10 finishes topped by a tie for third in 1995. He is staying with his son this week and providing valuable advice on the practice range.
“I never remember thinking, ‘Man, I wish I could hit this shot for my dad,’” Bill Haas said. “But I do know that there’s times I’m like, ‘I wish my dad could hit this shot for me.’”
Jay Haas never won a major despite having plenty of success on the PGA Tour.
Maybe his son can take care of that family oversight.
“I think he deserves a major in his career as good as he played,” Bill Haas said.
Defending champion Adam Scott has his major title and got off to a strong start in his quest to stay dressed in green, even with a stumble in Amen Corner.
Scott shook off a double-bogey at the par-3 12th, a tiny little hole that caused big trouble for a number of players. His tee shot caught the bank in front of the green and hopped back into Rae’s Creek.
“I had just received the most incredible ovation as I came to the 12th tee — and I hit my worst shot of the day,” Scott said. “I think that’s my first-ever trip into Rae’s Creek.”
The Aussie bounced back with a birdie at the 14th, rolled in a testy putt to save par at the 18th, and finished with a 69, one shot off the lead.
“It was a nice way to walk off, not shooting 70,” Scott said.
In contrast to Haas, it was the fifth time in his last six Augusta rounds that Scott has cracked the 60s, showing he still has the game to make a run at being the first back-to-back Masters champion since Tiger Woods in 2001 and 2002. Jack Nicklaus and Nick Faldo are the only other repeat champions.
If Scott finishes no worse than a tie for third place, he will take over the No. 1 spot in the world rankings for the first time in his career.
“In a sense, winning last year took the pressure off,” Scott said. “What’s the worst that can happen? I’m still a Masters champion.”
Playing in their first Masters, Jimmy Walker and Kevin Stadler of the U.S. and Sweden’s Jonas Blixt were among those shooting 70, making their way around the course just fine despite some unfamiliarity with the revered layout.
They are among a record two dozen Augusta rookies in the field, which doesn’t include four-time winner Woods, out of the game until summer as he recovers from back surgery.
The 35-year-old Walker is having a breakout year on the PGA Tour, picking up the first three victories of his career. He kept up his strong play, ripping off a run of four straight birdies starting at the 14th.
“I wasn’t thinking I was going to make four in a row,” Walker said. “But just keep hitting good shots.”
Gary Woodland and Brandt Snedeker of the U.S. also opened at 70, as did K.J. Choi of South Korea.
Stadler is part of the first father-son duo to play the Masters together. His dad, Craig, was the 1982 champion, while Kevin earned a spot in the field with his first PGA Tour victory at Phoenix.
The elder Stadler didn’t fare nearly as well as his son. Craig opened with an 82 in what he has said will likely be his farewell as a Masters competitor.
“I played like a moron,” Craig Stadler said.
Two players at 71 provided quite a contrast: 54-year-old Fred Couples and 20-year-old Jordan Spieth, who wasn’t even born when Couples won his green jacket in 1992.
Among those with afternoon tee times: Phil Mickelson, attempting to join Woods and Arnold Palmer with a fourth green jacket. But that bid got off to a rocky start when Lefty shot a triple-bogey 7 at the seventh, his worst score ever at the hole nicknamed “Pampas.”
The tournament began with Nicklaus, Palmer and Gary Player hitting ceremonial tee shots on a brisk, sunny morning. The “Big Three” combined to win 13 green jackets, including seven in a row at the start of the 1960s.
This Masters is far less predictable. Without Woods or a dominant figure in golf, it’s seen as the most wide-open tournament in years.
Day 1 did nothing to change that perception.

Charlotte jumps up to sixth in the East after OT win

WASHINGTON — The Charlotte Bobcats have leapfrogged another team, increasing the odds that their return to the playoffs won’t be... read more