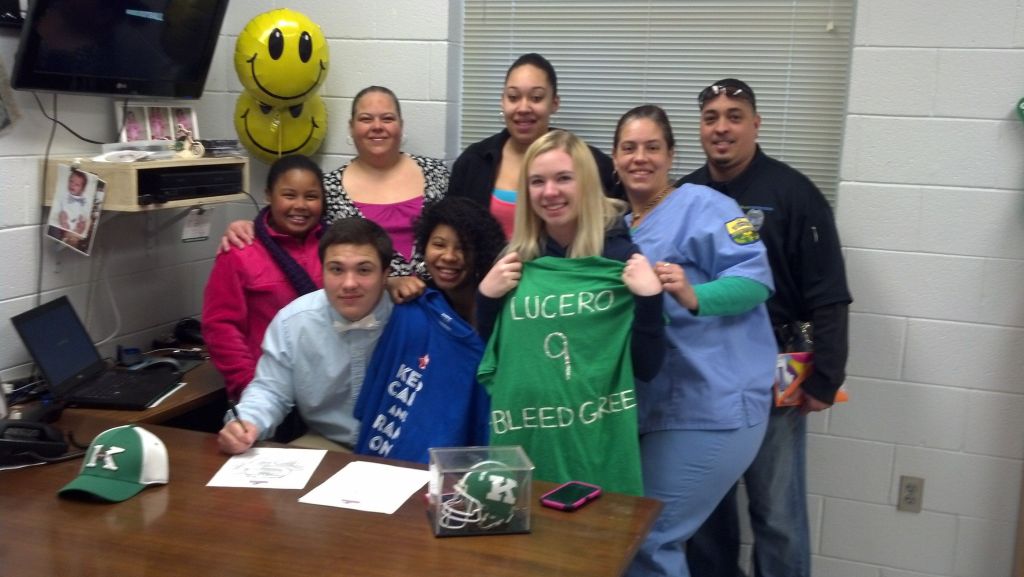 KANNAPOLIS — A.L. Brown senior Gabe Lucero has signed with a football program that has never won a game, but he sees that as a major positive.
Bluefield, an NAIA school in Virginia, was 0-11 as a start-up program last fall. That means Lucero will get in on the ground floor for a lot of firsts.
“Honestly, I’m coming from a school where there is total football tradition and I want be part of something new and I want to help start a football tradition at Bluefield,” Lucero said. “That’s really a main reason that Bluefield interested me. I’ll be part of the first win and I want to be part of the first playoff game and the first championship.”
Bluefield coach Ordell Walker had plenty of success at Greenville (Ill.) before taking the job at 750-student Bluefield.
“That’s a coach who’s already turned around one program, and I’ve got a lot of belief in him,” Lucero said. “We’ll play some tough teams next season (including Presbyterian), but I know he’ll give us an opportunity to win.”
The stocky, 217-pound Lucero had a versatile career at A.L. Brown, where he played fullback, slotback H-back and linebacker.
“He played multiple roles for us, and while he was a very good football player, his greatest attribute was as a senior leader,” A.L. Brown coach Mike Newsome said. “He’s tough and he’s solid. His measurables aren’t going to blow you out of the water, but he went out there and outplayed a lot of opponents.”
Lucero’s career highlight was the Berry game his senior year, a game in which he starred at fullback. The Wonders rallied to win 45-39, and Lucero’s success as the lead blocker against Berry linemen was a key.
“That’s a game I’ll remember, not just because it was one of the best games I ever played in my life, but because of how important it was,” Lucero said. “That was our first game against a 4A, and we showed people we were to be taken seriously.”
Several of Lucero’s teammates signed on National Signing Day. His opportunity came later, but he was being recruited by enough schools that he wasn’t worried. He weighed hid options before making the Bluefield decision in March.
“I heard about Bluefield and sent the coach an email,” Lucero said. “He responded and that led to a visit, and that visit went really well. I’m excited about Bluefield, and my family’s excited. I was being recruited by some schools in Ohio and Kentucky, but this is a lot closer for them.” While Lucero’s best Friday nights at A.L. Brown were as a physical blocker, he hopes to be a running back at Bluefield, which employs an Oregon-style spread offense and doesn’t use a traditional fullback.
“I’m not really big enough to be a college fullback, but one of the running backs in Bluefield’s system is a guy that can carry the ball between the tackles,” Lucero said. “That’s what I want to do. I really want to run the ball.”
Lucero is working hard with A.L. Brown’s strength and conditioning coach Todd Hagler to improve his speed this spring.
“Speed is what I’ve been working on all semester,” Lucero said. “The guys are getting ready for next season and I’m getting ready for it too. If I get opportunities to run the ball, I’ll be prepared.”