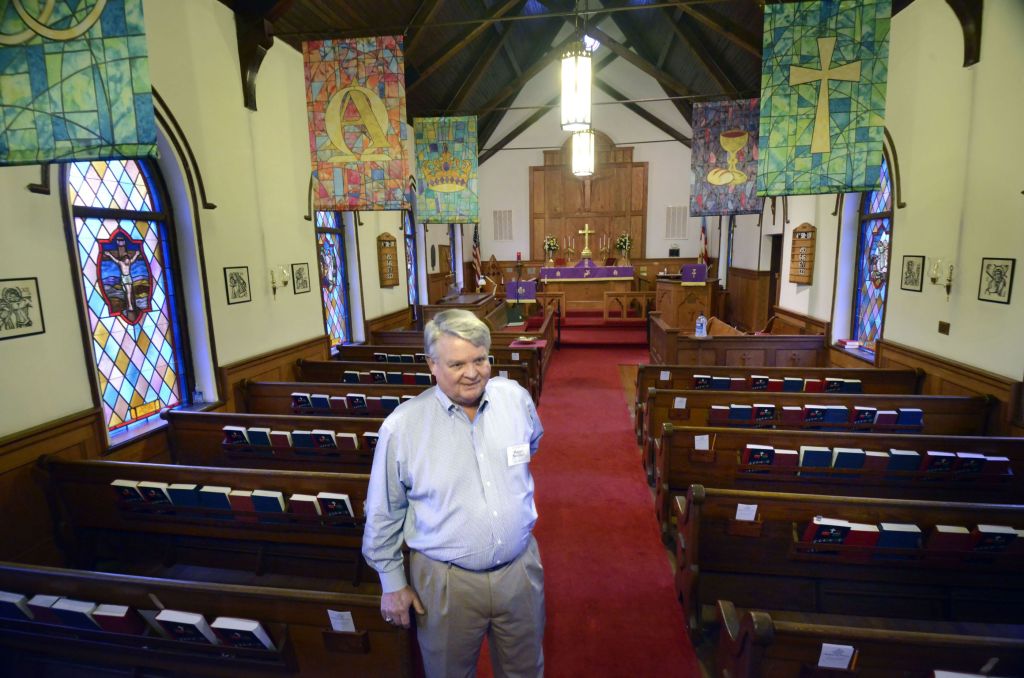 When the Historic Salisbury Foundation had its annual OctoberTour of Historic Homes, Laura Williamson was among those who walked through some of Salisbury’s renowned residences. When the opportunity came to peek inside local historic churches, she signed up.
The Foundation held its first Sacred Places Tour on Saturday. Similar to other area historic tours, visitors not only had a chance to see the churches, but in some cases talk to the descendants of founding members.
“I thoroughly enjoyed it,” Williamson said while visiting Back Creek Presbyterian Church, the final church on the tour.
She said it was great to go into the churches and see how they affected the community.
She and friend Carolyn Alexander said they liked learning about all of the churches.
“It makes it more interesting to live in an area if you know about the area,” Alexander said.
All of the congregations or churches on the tour were more than 50 years old, said foundation Director Brian Davis.
There were eight churches and two cemeteries on the Saturday tour with routes that took visitors to churches in Salisbury, along Mooresville Road and into western Rowan County.
The churches were First United Methodist Church, founded in 1783; St. John’s Lutheran Church, founded in 1747; Old Lutheran Cemetery, deeded in 1768; St. Paul’s Episcopal Church, founded in 1877; St. Mark’s Lutheran Church in Christ, founded in 1879; Thyatira Presbyterian Church, founded in 1747; Thyatira Presbyterian Cemetery, deeded in 1755; Mount Zion Baptist Church, founded in 1853; St. Luke’s Lutheran Church, founded in 1869; and Back Creek Presbyterian Church, founded in 1805.
The tours were self-guided. But they began at First United Methodist Church on South Church Street with an introduction by local historian and former teacher Susan Waller.
Waller, who spoke about how churches brought residents together, has given similar tours with Horizons Unlimited, the Old Stone House and Thyatira Presbyterian Church.
She managed to mix historical facts with humorous stories and anecdotes passed down through the years.
New residents to Rowan County are asked two questions, Waller said: “Who are your people and what church do you belong to?”
“I’m a firm believer that old graveyards have more history than books. You can trace everything in history in these old stones,” she said.
Waller said she collected her history not just from books, but from older residents, journals and family members.
Davis said organizers have already planned tours for the upcoming years and will include churches in other parts of the county.
The foundation established the tour to highlight the rich history throughout the county in area churches and cemeteries.
The tour purposely includes a variety of denominations and diverse churches, he said.
“It’s a great opportunity for people to experience the spaces and see the pews, the stone and what that means to them,” Davis said.
Linda McMurrer attends First United Methodist but still wanted to take the tour. She also attended the Stained Glass Trolley Tour sponsored by the Center for Faith and Arts in August.
“That was fabulous. I like history and architecture,” McMurrer said.
She said she’s learned a lot about her church. One feature she’s looked at, but never up close, were the intricate, hand-sewn banners scattered throughout the sanctuary and hanging from the walls.
Mount Zion Baptist Church, Boyden Quarters, located on White Road in Mount Ulla, was the only African American church on the tour. It was believed to be built on land that was once slave quarters, thus the name Boyden Quarters. Although founded in 1853, the current building was erected in 1942.
Pastor Corey Barr and church members presented a song, prayer and presentation. Barr even preached a sermonette. The features of the church included its baptismal pool and stained glass windows. The stained glass depicted brightly colored biblical images. Viewed up close, the thick glass edges protruded from the windows, giving off a sparkling effect.
Barr said the church felt participating in the tour was an opportunity to show others what the church was doing.
Arlene Brown has lived in Rowan County for 47 years, and has seen the inside of some churches, but always wanted to see more.
Friend Linda Sufficool also wanted to see churches she’s driven by, but never stopped and gone inside. The tour was very informative, Sufficool said.
Thyatira is the oldest church of any denomination west of the Yadkin River, and for Glenn McCorkle, it’s part of his family legacy.
He is a descendant of the church’s first regular minister, Samuel Eusebeius McCorkle.
The balcony around three sides is where slaves once worshipped, and some of those same slaves erected the church from handmade brick that at the time cost slightly more than $5,000. The cemetery features some of the county’s renowned citizens. The oldest stone marker is that of the first constable of the “Irish Settlement,” John Nisbet, who died in 1755.