Kitchen remodel was worth the wait 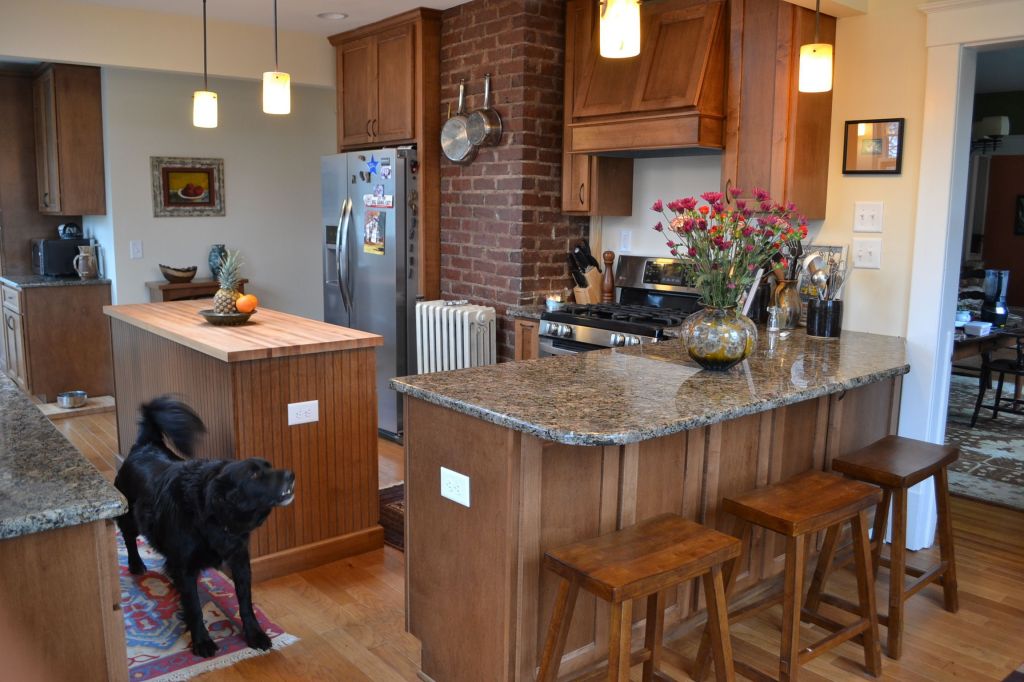 SALISBURY — We’d already lived in Salisbury for about five years when my husband spotted the house in Fulton Heights that is our current home. The two-story brick house wasn’t perfect, but it felt welcoming to both of us and seemed worthy of spending time and money on. The huge oak tree rising through an opening in the deck sealed the deal.

Over the years, we have slowly made improvements. Outside, my husband has attended to landscaping and added a patio. We changed up the exterior painting scheme, making the house more visually interesting. Inside we’ve painted and replaced ugly modern light fixtures. We added central air but kept the old steam heat radiators that are cozy in spite of their clanking and hissing.

We loved the feel of the kitchen that overlooks our back yard, but except for a wonderful skylight, its particular features held little charm. Although it offered lots of windows and counters and storage space, it was very dated. The white tile countertops with cobalt blue accents — circa 1980s? — were in bad shape. The cabinets were cheaply constructed and inexpertly installed. One eventually crashed to the floor, destroying a stack of vintage dinner plates I’d collected over the years. Perhaps it was God’s judgment on my hoarding tendencies.

The floor was also tile, large white squares, and not dog-friendly. Despite my best efforts, it never looked clean for long.

I finally got my husband to agree that if we were going to stick around we had to address the kitchen. And if we were going to renovate, I argued, we needed to redo the bathroom adjacent to the kitchen, taking a bit of the large kitchen space and expanding an inadequate bathroom so he might actually be able to take a deep breath when he showered and not worry about bumping the tiny shower enclosure.

It was a big project. We would basically be gutting the existing kitchen and bathroom. We decided to replace the tile flooring in the kitchen with hardwood and replace the cheap cabinets with custom-made. Our appliances were living on borrowed time, so they’d have to go as well.

I began consulting friends for ideas. The best thing this fact-finding mission uncovered was that because we live in a historic district we are eligible to receive a significant percentage of our renovation costs back as a tax credit over five years (see sidebar). When my husband began prying up the kitchen tile in anticipation of the project, I knew we couldn’t turn back.

We came up with a general plan for the kitchen, zeroing in on things we could agree on. While I coveted cherry cabinets in a natural finish, we settled on less expensive maple and found a cabinetmaker to make them for less than we would have paid for cabinets at a big-box store. A thoughtful designer I consulted suggested adding a peninsula so we could have seating. We weren’t able to go with her company to turn the design into reality because their estimate wasn’t compatible with our budget, but I’m grateful for her vision.

Through a recommendation we found a local contractor, Chad White, who understood that we did not have unlimited funds. I had no idea then that Chad would become my new best friend, the guy who for six weeks would devote himself to my happiness – i.e., to keeping the project moving along. He took care of almost everything: permits, inspections, dumpster, porta-potty. He bought paint while it was on sale to save me money and fussed at laborers who needed to be fussed at. While I had debated using a contractor at all, hiring one was definitely the right decision. Chad’s expertise was well worth the money.

Choosing the kitchen elements we wanted was fun but stressful. I researched lots of countertop options, from butcher block to concrete, but we came back finally to the ubiquitous granite. With Chad texting me incessantly to make a decision, I finally settled on the economical but beautiful Brownie.

We didn’t want to overdo the granite, so for the island our cabinetmaker found us a reasonably priced butcher block surface. While it takes a bit of effort to maintain (think sandpaper and mineral oil) it’s still fairly practical and adds a warmth granite doesn’t have. We replaced an old porcelain sink with unremarkable but highly practical stainless steel. We chose can lights, with soft amber pendant lighting over the island and peninsula, to illuminate the kitchen.

Going without a kitchen and downstairs bathroom for more than a month was an ordeal, but my husband and I realized that the snippy words that began to invade our conversations during this period would pass.

There were hiccups along the way. Unanticipated delays. Things costing more than anticipated. But we also lucked out here and there. When I went back to buy a double oven we coveted, the price had been reduced by hundreds of dollars on the very last one in stock, and the salesperson cheerfully offered me another big reduction.

Our kitchen retains some of its original flavor. The original windows remain (though they still need some attention). We kept our old-school radiators but gave them a nice power cleaning and repainted them. We kept a section of exposed brick that we’ve always loved.

Some of the small things about our new kitchen make me inordinately happy, like new doorknobs that replaced old ones that never worked right. Every time I don’t have to stop and jiggle the doorknob when I walk out on the deck I want to text Chad a happy face emoticon.

The new kitchen is a wonderful place to cook. It’s a place where people want to hang out. There’s plenty of cabinet space. The peninsula is now my favorite place to work. In fact, it’s where I’m writing this feature. If we ever move, I’m pretty sure the kitchen will sell the house. (The bathroom turned out great as well, but that’s too much to get into here.)

The project isn’t quite done. We haven’t finished the tile backsplash we’re planning. But it’s incredible to finally have such a beautiful and functional kitchen after so many years of such unremarkable ones. I’m glad we finally took the plunge. I wish we’d done it during the years our children were living at home, but I believe there’s something to be said for deferred gratification.