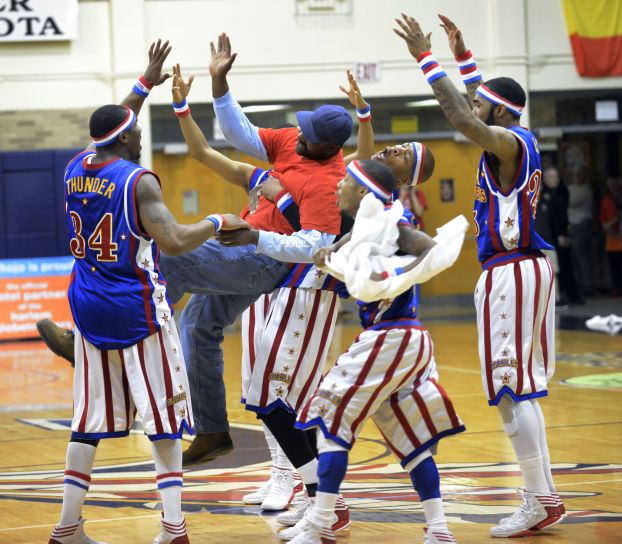 SALISBURY — Donte “Hammer” Harrison grabbed the rim at Goodman Gym, hoisted himself up through the net, and revolutionized the art of goaltending by using his head as a deflector shield.
If you’re thinking that it wasn’t business as usual at Catawba’s gym on Wednesday, well, you’re right.
The Harlem Globetrotters, the original, authentic Harlem Globetrotters were in town, and they delivered to an appreciative packed house that unique mix on antics and athleticism that have kept them in business a very long time.
“We had a Christmas tournament kind of crowd,” Catawba’s interim AD Jeff Childress said happily.
Actually, it was the Christmas tournament, and then some. Not only were the bleachers full, so were several rows of chairs at courtside. People were parking way down at the tennis courts like they have to do for homecoming football games.
The Globetrotters danced a lot, joked a lot, got some front-row fans soaking wet, and set a new record for dunks at Goodman Gym. If they gave you 10 points for backwards dunks, the Globies would’ve broken 200.
“I was shocked when I heard they were going to be in Salisbury,” Dawn Holshouser said. “I thought it was really good. People were laughing out loud, and you don’t get to see people laugh like that anymore.”
If you’re wondering what the score was, the Globetrotters held off a black-and-gold aggregation known as the World All-Stars 85-78. The World All Stars have replaced the Washington Generals, who lost a few thousand in a row to the Globetrotters back in the day when they always provided the opposition.
The World All Stars have some guys who can shoot, some guys who can dunk and some guys with impressive tattooes, but the fans gathered at Goodman Gym were never really worried about the Globetrotters holding their lead. They always do.
Goodman Gym holds 3,500, which makes it a much more intimate venue than the arenas the Globetrotters usually visit on their world travels. They’ve played 20,000 or so games. At last count, they’d played in 120 countries.
“I thought that seeing them in a small place was the best part of the experience,” Reneé Fox said. “That allowed them to interact with the crowd in a great way.”
Caroline Billingsley agreed.
“The audience participation was what I liked most,” the North Rowan student said. “I’m sure that’s what they wanted, and the breaks were even better than the game action.”
The Globetrotters rarely played it straight and took full advantage of some rule twists.
The “Hot Hand” rule in the third quarter meant double points for the player wearing an odd-colored jersey, sort of like a volleyball libero. That meant four points for the Trotters every time Eric “Hacksaw” Hill threw one down.
“The Make or Miss” rule employed in the second quarter meant a player had to trot to the bench if he missed. That led to 5-on-2 opportunities for the good guys that always ended with a weave, a lob and a fierce slam dunk.
The first and fourth quarters featured “The Trick Shot Challenge,” which, as you might expect, was right up the Trotters’ alley.
Challenged to dunk after turning a somersault, Corey “Thunder” Law, yawned, executed the challenge with ease and earned five points for his team. Law was the Big South’s most feared dunker at High Point not long ago.
Brawley “Cheese” Chisholm had no trouble shooting a free throw backwards and with one hand to claim five points on another “Trick Shot Challenge”. Coach Roy Williams may want to try the backwards method with some of his Tar Heels.
“Hammer” dunked two balls at once for five more trick-shot points, but even that feat thrilled the crowd less than the constant comedy routines of ringleader Nathaniel “Big Easy” Lofton and Scooter Christensen and the ballhandling wizardry of female Globetrotter Fatima “TNT” Maddox, who can spin a ball on a finger all night long.
“I’d seen the Globetrotters before in the coliseum in Greensboro, but this was better,” Steve Yang said. “This was family entertainment at its best.”
Spotlight Dance Company and the Sacred Heart cheerleaders entertained at halftime.
The Globetrotters have been around since the 1920s. The name Harlem Globetrotters has a mystique, but the team actually got its start as a serious barnstorming basketball in the Midwest, not New York.
In 1948, when many sports fans still regarded black basketball players as a novelty, the Globetrotters famously took on the National Basketball League champion Minneapolis Lakers, an all-white team led by 6-foot-10 George Mikan. The Globetrotters won a thriller in front of 17,823 fans in Chicago.
That game helped open the door for black pros. Chuck Cooper was the first to be drafted in the second round by the NBA in 1950, and Earl Lloyd, drafted on a later round that same year, was the first black player in an NBA game. The Globetrotters’ own Nat “Sweetwater” Clifton played with the New York Knicks a few days after Lloyd and Cooper debuted.
Over the years, the Globetrotters became more about entertainment than basketball, but their skills and athletic ability haven’t diminished.
Coach Louis Dunbar played with the Trotters for decades, but it’s often forgotten he was Magic Johnson before Magic Johnson. In the early 1970s, Dunbar was a 6-foot-9 All-America point guard for the Houston Cougars.
Catawba’s greatest player — Dwight Durante, a dynamic 5-8 guard who was among the nation’s top 10 scorers three times — was drafted by the New York Knicks in 1969 but signed instead with the Globetrotters.
Wednesday, it was the Globetrotters’ turn to come to Catawba, and kids left with smiles on their faces and dribbling red-and-white-and-blue Globetrotter basketballs.
“I watched the Globetrotters on TV when I was a kid and I thought they were awesome,” Catawba graduate Demetrius Black said. “I brought my son to see them tonight. They were all I expected them to be — and even more.”

Barking up the wrong tree? Council debates whether to take back animal control responsibilities