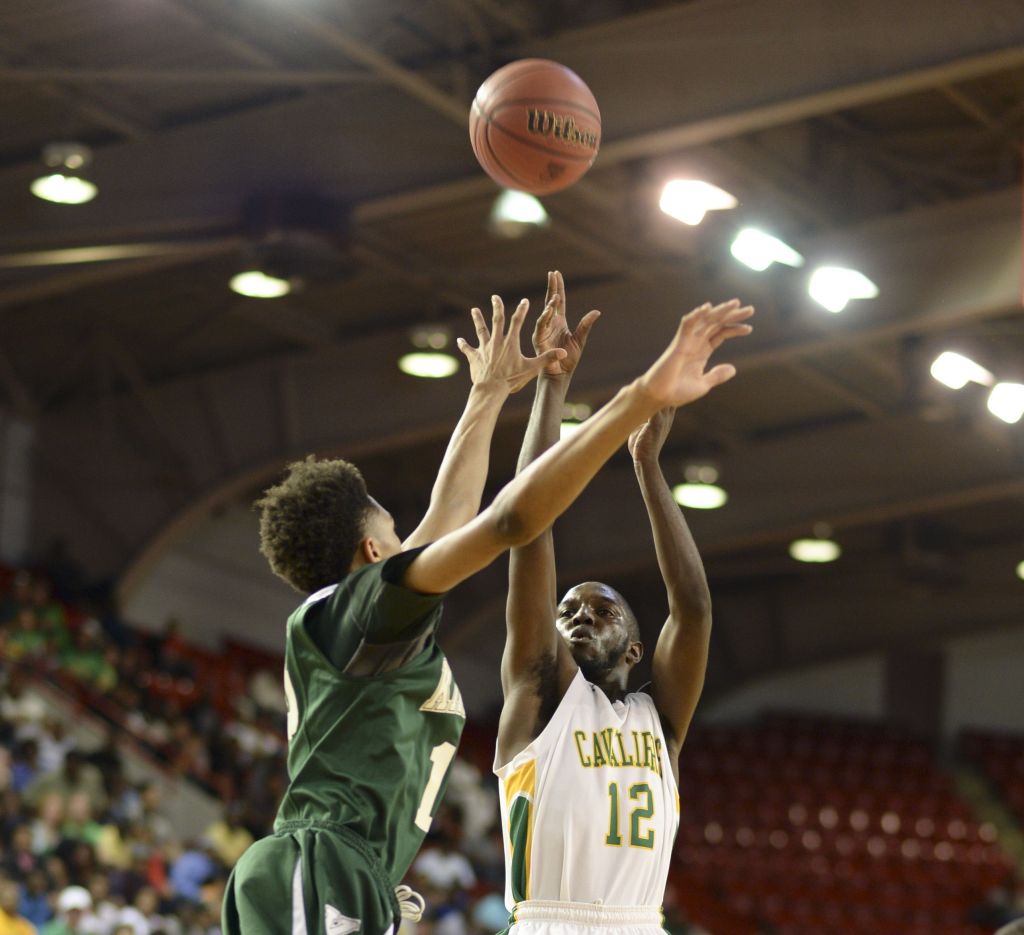 RALEIGH — This isn’t the story North Rowan’s boys basketball team wanted to tell, but it very nearly was.
If the Cavaliers could magically erase the last six minutes and 25 seconds of Saturday’s 2A state championship game, it might have been them — rather than heavily favored Kinston — who walked away with that most-coveted piece of hardware.
“We were right there,” senior Michael Bowman said in the Reynolds Coliseum media room, moments after North’s miraculous bid fell short, 67-57. “I honestly thought, looking up at the scoreboard, we could get this done. We had the lead. All we had to do was trade baskets, make our free throws and get some stops.”
Instead, it was North’s season that came to a complete stop. The final chapter has been written, and it’s not a happy ending for overachieving Cavs. But just the same, the story of NR’s 2013-14 campaign was a spellbinding novel you couldn’t put down.
“We had a great run,” coach Andrew Mitchell proclaimed afterward. “It’s amazing. We played five of the top six teams in the state (in the playoffs). For us to come through and be here, I’m just as happy and excited as can be.”
The climb, of course, was worth the fall. It was one last hurrah for Bowman and fellow seniors Michael Connor, Kenyon Tatum, Dalton Nelson and Alex Billingsley. Along with sophomore Jalen Sanders, they treated North’s legion of fans to an inspired performance, one laced with promise, intrigue and ultimately disappointment.
“We proved a lot of people wrong just getting here,” Connor offered. “Looking back, we accomplished everything we hoped to. Everything except winning today.”
North had its chance. In a match that often resembled two dogs scrapping for one bone, the Cavs took a 51-50 lead when Connor converted both ends of a one-and-one with 6:52 remaining.
“We went in front, but we never had a chance to breathe,” said Sanders, who tallied a team-best 19 points despite a pedestrian shooting exhibit. “It was never more than a five or seven-point lead until the end.”
The end could have come when Kinston high-rise Brandon Ingram — all 6-foot-8 of him — scored on a frozen-in-time grand slam from the right side, then hit an ensuing free throw to put the Vikings ahead 50-43 late in the third quarter. Or it could have come when elusive guard Andrew Lopez, Kinston’s senior and a three-time state champion, Roto-Rootered his way to score each of his team’s last three field goals, providing a 56-52 lead midway through the final period.
“We knew what was on the line,” Lopez said after shooting 9-for-14 from the field and netting 27 points. “This team is very good at tightening up when we have to. It’s not so much that we expect to win all the time, but that’s what drives us.”
What drove Kinston to its third consecutive state title came in the final 2:23. With the outcome on the line, it sank 11 of 14 free throws down the stretch.
Ingram — who contributed 28 points, 16 rebounds and showed why he’s drawing interest from top collegiate programs — was 8-for-8 from the line in the waning moments. “I know what my team needs,” he explained matter-of-factly. “If I get the ball down there I’m looking to score, but I’m not gonna force anything.”
When the clocked ticked to a close, Kinston’s players turned the court into a dance floor while North’s sat with heads down, faces buried in their hands. Mitchell himself cried “tears of joy.” Bowman later spewed a list of North’s postseason acheivements, his words tumbling over one another like a litter of puppies.
“We did a whole lot of things that people didn’t think we could do,” he said. “First we beat Lexington and won the conference tournament. We overcame that. We beat Shelby, and they have the next Michael Jordan (guard Gabe DeVoe). We overcame that. We beat a ranked team in East Rutherford and then Smoky Mountain, who hadn’t lost to anyone. We overcame all of that.”
They did, and each of those victories made a fine souvenir. But the when the final horn sounded it was Kinston that owned the house, the Cavaliers and the championship.
“We’ll go down as the team that came up just short,” Nelson said. “But I will always feel like we should have won. We could have shocked the world.”
That’s the story North would have loved to tell.