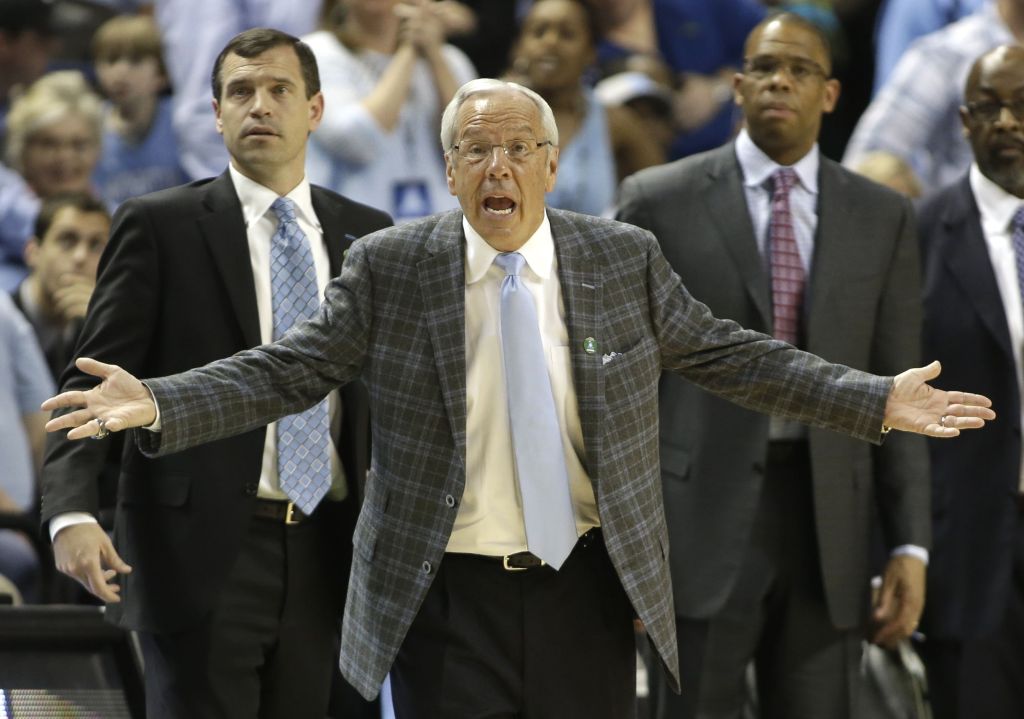 GREENSBORO — Talib Zanna snatched down nearly every loose rebound, terrorizing No. 15 North Carolina on the boards to help Pittsburgh win what amounted to a road game in its new league tournament.
And for coach Jamie Dixon, it’s another sign that his Panthers are playing their best at the right time.
Zanna had 19 points and a career-high 21 rebounds to help the Panthers beat the Tar Heels 80-75 in the Atlantic Coast Conference tournament quarterfinals Friday.
James Robinson also scored a career-best 19 points for the fifth-seeded Panthers (25-8), who used a dominating start to build a huge lead before holding off a late rally by the fourth-seeded Tar Heels (23-9).
They didn’t finish strong, repeatedly committing turnovers against pressure and missing free throws that could have stopped UNC’s frantic rally. But they’re still alive in the ACC tournament, earning a trip to Saturday’s semifinals to face sixth-ranked Virginia in a rematch of a game they lost on a last-second 3-pointer.
“They’re confident in how they’re playing right now,” Dixon said. “I think that comes and goes with teams. But that’s where we’re at right now and it’s a good time to be doing that.”
Pittsburgh led by 20 points midway through the second half and 70-54 with 4:31 left before UNC’s frantic comeback behind Marcus Paige, who hit two 3-pointers in those final minutes and finished with a game-high 27 points — 20 after halftime — before fouling out with 25.4 seconds left.
UNC got it to 78-75 on Nate Britt’s jumper with 11.4 seconds left, but Robinson knocked down two free throws to make it a two-possession game again. Then Lamar Patterson rebounded a hurried 3-pointer by James Michael McAdoo with 4.3 seconds left to essentially seal it.
Patterson missed two free throws after that rebound, part of a 6-for-16 effort at the line in the final 4 minutes.
Still, the Panthers have won five of six to pull out of a three-game losing streak that started to threaten their NCAA tournament chances, with this ranking as probably their best of the year. And their experience in 12 games decided by five or fewer points helped them hang on in front of UNC’s roaring home-state crowd.
“We know what we have to do,” Patterson said. “We know we can’t give up. The games previously during the season that were close … we took stuff from each of them and we were able to close it out today.”
Zanna, a 6-foot-9 fifth-year senior, came within two rebounds of tying the single-game tournament record that had stood since 1959 before fouling out with 1:03 left.
He had 10 offensive rebounds — one shy of UNC’s team total — and helped Pitt take a 21-6 edge in second-chance points against one of the league’s best rebounding teams.
Pitt shot 52 percent with all those extra point-blank looks off offensive rebounds.
“I was just crashing, just trying to be around and going to the glass, and the rebounds kept finding my hands,” Zanna said. “That kind of kept our offense going.”
At one point, Zanna tipped in two straight offensive rebounds and had 17 rebounds to UNC’s 16 with nearly 14 minutes still left.
North Carolina had reached the tournament final for the past three years, but killed its chances of a return with a terrible start. It missed 16 of 19 shots and fell behind 25-8, trailed 36-26 at halftime and ultimately 61-41 on Josh Newkirk’s three-point play with 7:22 to go.
The Tar Heels are second to Duke with 17 ACC tournament titles, but haven’t won one since 2008.
“I’m always a guy who thinks we’re going to come back from anything,” UNC coach Roy Williams said. “I thought this was going to be one of the great finishes. I really believed that. Some people think I’m a little wacko anyway.”
The Tar Heels started 0-3 in the ACC and stood at 1-4 before running off 12 straight wins, including a home win against Pittsburgh, to earn a double-round tournament bye. But UNC didn’t play well late in the streak and lost at Duke last weekend, its first loss since Jan. 20.
Now they’re heading into the NCAA tournament with two straight losses for the first time since the 2003-04 season, Williams’ first at his alma mater.
“I think we can just learn from the things we did well in that last 8-minute stretch,” Paige said. “At the same time, getting down 17 early against good teams — we’re only going to play good teams from here out, that can’t happen. It’s going to be too big a hole to dig out of.”