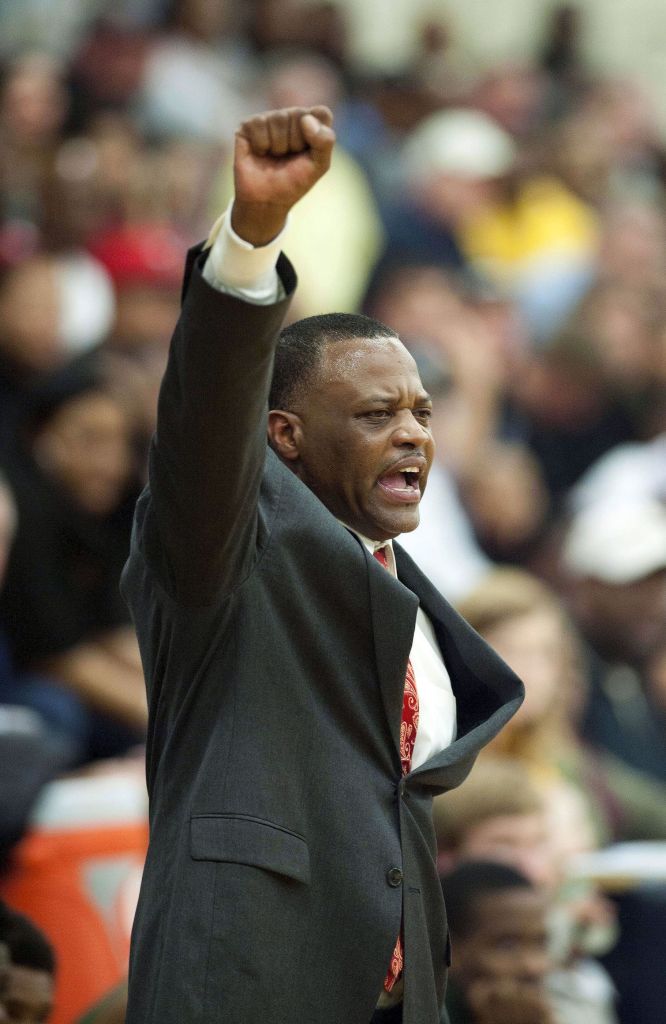 GREENSBORO — North Rowan coach Andrew Mitchell said he’d talk basketball to anyone willing at the western regional press conference at the Greensboro Coliseum Monday morning.
When you’ve got three state championships under your belt, there’s naturally a lot of folks who’ll lend an ear.
East Rutherford assistant Rob Boykins was one. Mitchell and Boykins are not only linked because their teams are facing each other Thursday, but there’s another bond from the past.
Boykins was among Mitchell’s first recruits when Mitchell was an assistant at Johnson C. Smith. They’ll be on opposite sidelines at Fleming Gym in the regional semifinal. East carries a 21-5 record and rolled Forest Hills 81-58 Friday to reach the regional for the fourth time. North brings a 19-5 mark into its fifth regional appearance
“Rob and I go way back,” said Mitchell, who played at Catawba in the 80s. “We laugh and talk all the time.”
Boykins starred at Erwin Triton High in Harnett County in the early 90s. Mitchell made the trip to Erwin to build up the Golden Bulls to a young Boykins, then called ‘jumping jack.’
“He came down to my high school and I was running track at the time,” Boykins said. “He actually waited for me and sold me on Johnson C. Smith. I never thought in this lifetime that I’d be coaching against him.”
Mitchell’s playing days are done now, but back then he still had enough skill left over from his time as an Indian to be persuasive. North’s leading scorer in 1984, Mitchell had enough moves to beat Boykins on the court.
“When we recruited Rob, that was back in the days I was still playing. I told Rob ‘if I beat you, then you come to Johnson C. Smith. I beat him twice and he came to Smith.”
Boykins has two sons that have absorbed his basketball acumen. DeVince is a sophomore on the team at Marshall and DeVonte is a senior on ER’s squad that averages double-digit points and has committed to Georgia Southern.
“That tells me how old I am that I’m now coaching against his son,” Mitchell quipped.
•

Mitchell stands with 98 wins in four years at North. A regional championship will give Mitchell 100 wins at North. Mitchell carries a 98-18 record at North after guiding the Salisbury girls to a pair of state 2A championships. North has reached the regional three times in the last four years.
•

North, East, Smoky Mountain and Hunter Huss comprise the four-team bracket. There’s championship lineage as North, East and Huss all won state titles in 2011. North was 1A and Huss 3A that year. Rowan fans may remember East hitting seven 3-pointers in the third quarter of a 69-56 win in the regional semifinal against Salisbury to stun the highly touted Hornets team that carried Darien Rankin, Romar Morris and John Knox.
Meanwhile, Smoky Mountain is the only unbeaten boys team in the state at 27-0. The Mustangs are the west’s top seed.
“It’s a grind to get to the championship,” Mitchell said. “We’ve played some good teams just to get here and it’s prepared us for this week.”
•