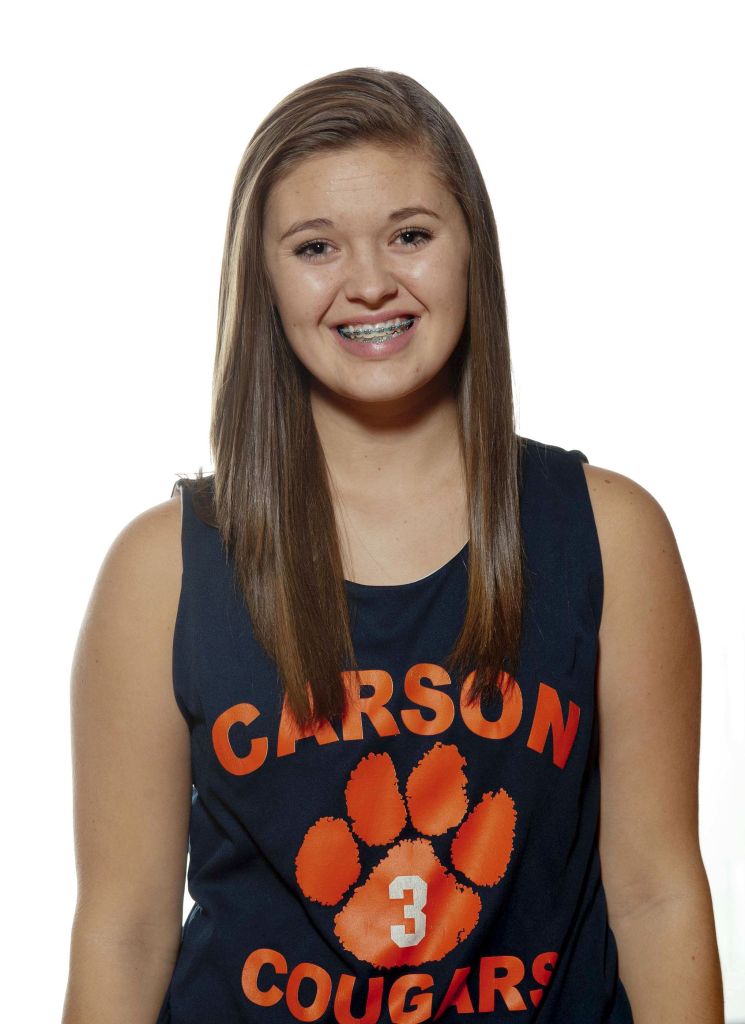 CHINA GROVE — It took the Carson girls a while to shake off the effects of a week long layoff but when they did, the results were impressive.
The Cougars used their defensive pressure and the timely shooting of Kate Cole and Alex Allen Monday night to rally past Cox Mill, 51-42. It was a positive Senior Night for Carson as they improved to 11-11, 9-7, securing the fifth seed in tonight’s South Piedmont Conference tournament opener.
“Our defense keyed everything tonight,” Carson coach Brooke Misemheimer noted. “If you get stops and play good defense, that leads to good offense.”
Early on it was not “pretty basketball” for Carson as they missed their first five shots and fell behind 12-2. Then the Cougars clamped down with their defense and got key baskets from Allen, Cole and Sydney Huffman to pull ahead 19-18 at the half.
The third period proved to be decisive as Carson got a trio of three pointers from Cole and held Cox Mill to just three points, surging ahead 37-21.
“We always talk about how critical the first four minutes of the half are,” Cole stated. “So we wanted to get out quickly especially on senior night.”
Cole and Allen each had 17 to lead the winners while senior Megan Gray came through with six key points and two critical rebounds in the second half surge.
“We decided we really needed to step up our game after the bad start,” Allen stated, “At the half we talked about picking it up or going home with a loss. It paid off for us.”
The Chargers (7-17, 5-11) were hampered by foul problems for their senior leader Taylor Sehm-Crowley and could not bounce back. She scored 12 but missed large segments of time in both halves. Forward Madison Rinkus led them with 13 including nine in the fourth quarter when the Chargers made a brief run at the lead. They got as close as six but a rebound lay-up by Gray and a three point play by Allen with two minutes left locked up the victory
““We don’t respond well to adversity,” Cox Mill coach Kate Jenis said. “Their defensive pressure plus the fouls on Taylor got us off balance and no one stepped up. We rely so much on Taylor that when she goes down we all kind of follow”
Carson, meanwhile had lots of players step up in this one at critical times in the game.
“In the second quarter we found some life,” Misenheimer said, “Then we had just a great third quarter. We had a good night overall especially for four outstanding seniors.”
Carson will play its SPC tourney opener tonight at 6 p.m. at East Rowan against Central Cabarrus. Carson will then host the semifinals and finals this week at their home gym.