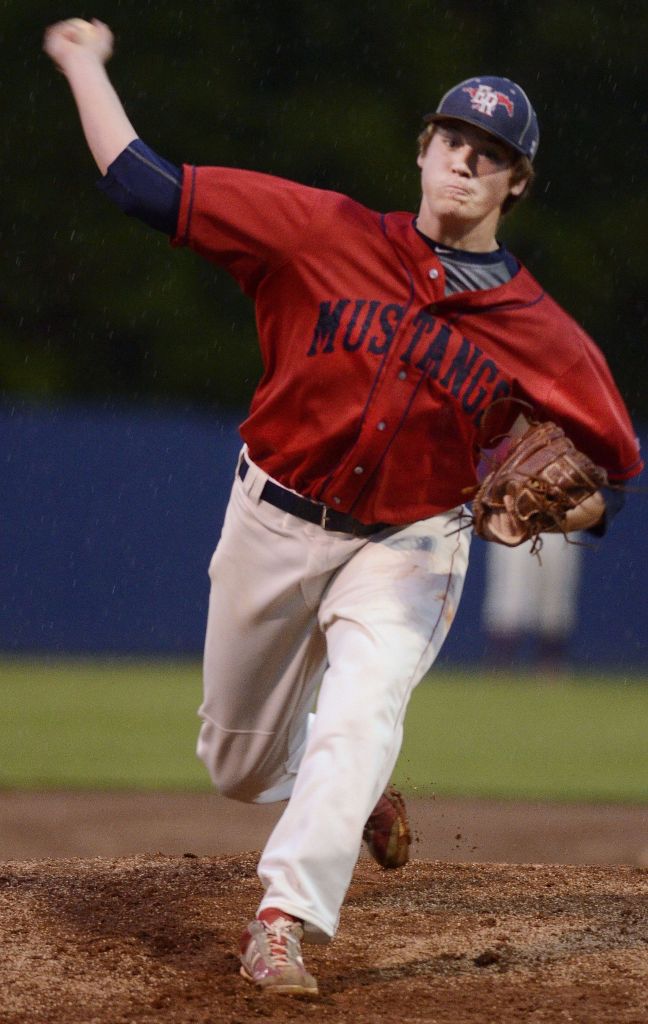 GRANITE QUARRY — East Rowan’s Chase Jarrett stands 6-foot-5 and weighs 235 pounds, and a frame that large on a high school kid naturally creates large expectations.
Jarrett was only pretty good as a junior, but obviously there are a lot of people who believe he can succeed as a pitcher at the college level. He’s an early signee based on future potential more than past stats.
Jarrett, a right-hander, signed with Brunswick Community College. It’s a two-year school on the coast between Wilmington and Myrtle Beach, near where the Jarretts take vacations at Ocean Isle, so location is definitely a plus. It’s not like Jarrett, who is a good student, is packing his bags for snowy South Dakota.
“Chase is progressing along,” East coach Brian Hightower said. “There were quite a few schools interested in him, but he wanted to go ahead and sign with Brunswick early. He wants to see what he can do.”
East enters the 2014 season with a proven ace in Connor Johnson. The No. 2 starting pitcher — Jarrett, Harrison Bell or Joseph Peeler — is going to be equally important because East is part of the South Piedmont Conference now.
In the SPC, teams play each other back-to-back in the same week, Tuesday and Friday, which means teams will have to use two different starters. There were a lot of years when East ruled local baseball and had to face everybody’s ace pitcher twice in a course of the season.
“I’m all for this schedule,” Hightower said. “I’ve been in favor of back-to-back scheduling for years. I think every conference in the state should do it.”
Jarrett had his moments as a junior — 10 strikeouts in a five-inning shutout of Statesville, eight strikeouts in five innings against a Mount Pleasant team with some power bats, and nine strikeouts in four innings against South Rowan at Staton Field in a key league game.
Those were his three mound wins in a 3-4 season that he finished with three cracked ribs. The rib injury prevented him from competing in American Legion ball last summer, but he plans to play this year.
“That South win is the one I probably will never forget,” Jarrett said. “Because of how big a game it was and because of how wet the weather was. We went through 60 bags of Turface that night.”
Jarrett went through South hitters as fast as the Mustangs went through field-drying Turface. East won 5-1.
Jarrett had 45 strikeouts in 34 1/3 innings last season, which is good, but he also walked 18. The keys for Jarrett are the same keys for most pitchers — locate the fastball, hit spots, get ahead in the count.
“If I get behind, I do tend to walk too many,” Jarrett said. “But I’ve got a good curveball that I’ve worked hard to get where I want it. If I can pitch ahead, I can a lot of outs with the curve.”
Jarrett was recommended to Brunswick coaches by Tomas Cruz, the pitching instructor at the Showcase Baseball Academy in Matthews.Jarrett visited and had a trial-by-fire, pitching against Brunswick hitters in an intrasquad game.
“I pitched three innings and didn’t do bad at all, and then the coach took me to his office and they made an offer,” Jarrett said. “It was a big relief off my shoulders to make a decision about college, and there were a lot of positives with Brunswick. One of them is my brother (Micah, a former Mustang) lives in Wilmington, so I’ll have a little piece of home close by.”
Brunswick is a stout program. Coached by former Clemson shortstop Robbie Allen, the Dolphins have made appearances in the national junior college rankings each of the last four seasons.
Brunswick is getting a pitcher who had an uninspiring 4.69 ERA last season, but reading between the lines, most of the damage against Jarrett came very early in cold-weather games against 4As North Davidson and Providence. Eight earned runs in those two games put Jarret behind the ERA 8-ball, but he was good a lot more often than he was bad after that.
Hightower plans to give Jarrett a chance to swing a bat as the first baseman or DH. He wasn’t scary at the plate last season, batting .267 with four RBIs in 51 at-bats, but he did have one huge outing on a huge stage. Half his RBIs came when East beat Carson 4-1 early in the season.
“Most of us had never been in a game that big, so it was nice to get a clutch hit,” Jarrett said. “We learned a lot last year with a really young team. We’ll be more experienced this time. I expect us to have a solid season.”
Hightower enters the season optimistic that Jarrett will enjoy a breakout as a hurler and possibly as a hitter as well.
“He can be good, and we need him to have a good year for us,” Hightower said.