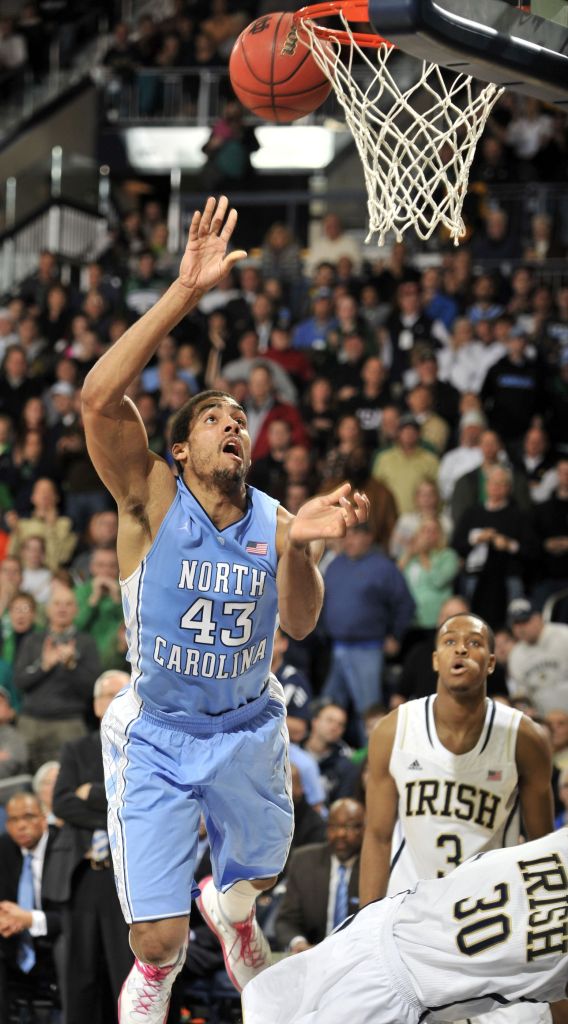 Associated Press
SOUTH BEND, Ind. — North Carolina was too big and too quick for Notre Dame.
The Fighting Irish made seven of their first 13 shots to open a nine-point lead in the first half, but wore down under the pressure of North Carolina’s athleticism. The Tar Heels forced 17 turnovers and had a 44-26 advantage in the paint en route to a 73-62 victory Saturday, their fifth straight win.
“I think the biggest thing was just our sense of urgency on defense,” said James Michael McAdoo, who led North Carolina with 18 points and eight rebounds. “Just really trying to get the offense out of their rhythm and really just taking things away.”
The Tar Heels (16-7, 6-4 Atlantic Coast Conference), which started 0-3 in the ACC, improved to 2-3 in the league on the road and won their fifth straight by double digits. The loss dropped the Irish (12-12, 3-8) to .500 in February for the first time since losing five straight in 2006 to fall to 10-10.
North Carolina coach Roy Williams was happy with the way his team regrouped after starting 1-of-7 and 7-of-24 from the field.
“I thought our team, the last few minutes of the first half, really grew some today. We played with some poise. We had a couple things going wrong and yet five guys got together and got it straightened out,” he said.
Notre Dame coach Mike Brey said the start of the second half was key after the Tar Heels finished the first half on a 9-0 run to take their first lead on a rebound by McAdoo with 1:24 left before intermission.
In the opening seconds of the second half, McAdoo stole the ball from Steve Vasturia and passed ahead to Leslie McDonald for a layup 18 seconds in for North Carolina’s first fast-break basket of the game.
“It almost sets the tone for the half,” Brey said.
If that didn’t, the Tar Heels quickly did. J.P. Tokoto stole the ball from Austin Burgett for a dunk to give the Heels a 35-25 lead. That was followed moments later by Marcus Paige, who finished with 16, stealing the ball from V.J. Beachem and passing ahead to McAdoo for another dunk that gave the Tar Heels an 11-point lead.
The Tar Heels extended the lead to 44-30 on a dunk by Brice Johnson after Tokoto stole the ball from Notre Dame point guard Eric Atkins and later opened a 57-41 lead on a fastbreak layup Paige.
Tokoto, who had a highlight-reel dunk in the first half, said the transition baskets were key.
“It definitely swings it for us. A big dunk from anybody on the team gets everybody going, try to get another stop to get another one, and that’s what we did,” he said.
Atkins said the turnovers made it hard for the Irish to play defense.
“When you turn the ball over, it’s hard to play transition defense,” he said.
North Carolina also did a better job of defending the Irish, who opened the game by making their first four 3-pointers but were 2-of-17 the rest of the game. Brey said the biggest problem was his team’s lack of offensive rhythm.
“That’s probably hurting us the most right now,” he said.
He said North Carolina’s depth, particularly up front, was hard on Notre Dame.
“They kind of pound on you. Like a running football team. It kind of takes its toll as they rotate the guys through there.”
It was Notre Dame’s eighth loss in its last 10 games. Garrick Sherman led the Irish with 17 points, Atkins added 11 and Beachem and Zach Auguste had 10 each. Austin Burgett returned to the Notre Dame lineup after missing four games after undergoing a cardiac procedure to correct an irregular heartbeat. He played 11 minutes but didn’t score.
“He’s still kind of feeling his way,” Brey said.
Tokoto had 13 points and seven rebounds and Johnson added 10 points.
When Williams was asked whether he believes his team has found a rhythm, he said he never feel like that.
“I feel like every day we’ve got to play the best we can possibly play or the world’s going to end. I’m never going to be satisfied. Armageddon’s coming around the corner if we don’t play great is the way I look at it,” he said.