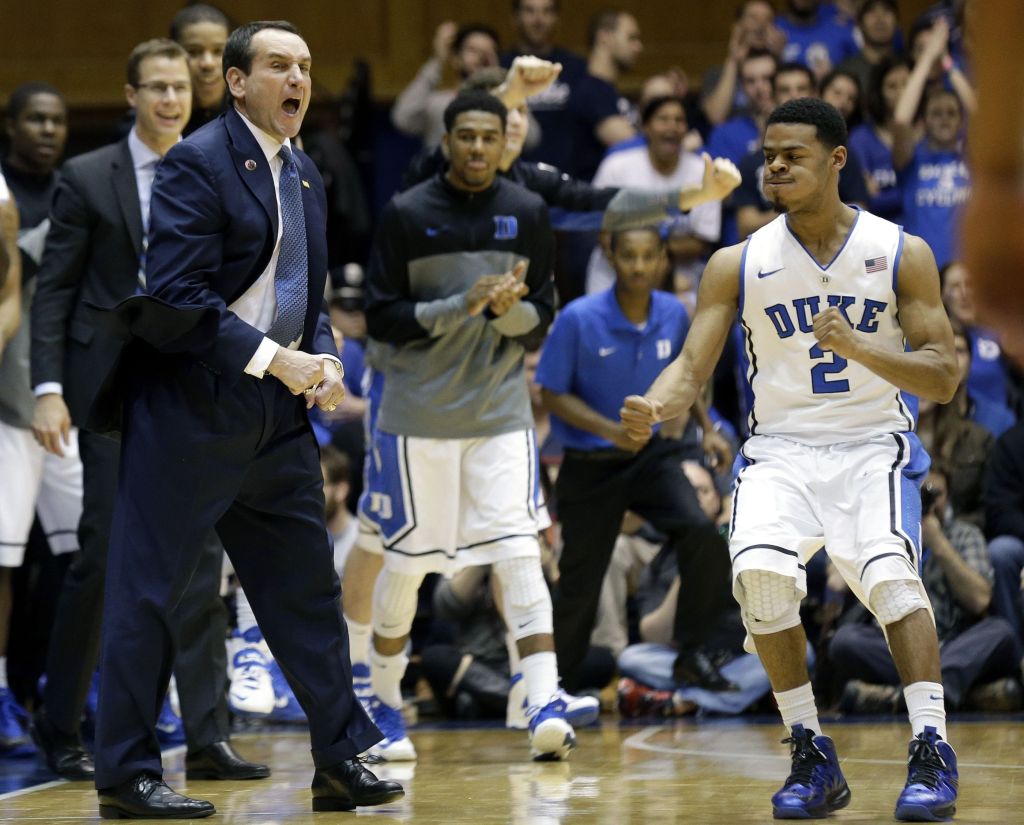 DURHAM — No. 11 Duke burned through a lot of emotional energy a few days ago in its loss at Syracuse.
The Blue Devils still had plenty left to take care of Wake Forest.
Jabari Parker scored 21 points in Duke’s 83-63 rout of the Demon Deacons on Tuesday night.
Rasheed Sulaimon added 19 points for the Blue Devils (18-5, 7-3 Atlantic Coast Conference).
Playing their first game since their thrill-a-minute, 81-79 overtime loss to the eventual No. 1 Orange, they showed no signs of sluggishness.
“We beat the emotional hangover,” coach Mike Krzyzewski said.
And the Demon Deacons, too.
Duke shot nearly 51 percent, hit 12 3-pointers against one of the ACC’s best perimeter defenses and used a big run at the end of the first half to roll to its eighth straight victory over its instate rival.
“It was something for us to prove,” Parker said. “I think it was a game where we needed to improve and just get back going.”
Devin Thomas had 14 points before fouling out for the Demon Deacons (14-9, 4-6), who have lost three straight for the first time this season.
They had 19 turnovers — including five straight during Duke’s decisive run.
“And it was an uphill climb from then on,” coach Jeff Bzdelik said. “It just shows you how important each and every possession still is. … That’s a big difference, obviously, especially in a place like this.”
Playing without leading scorer Codi Miller-McIntyre, Wake Forest hung around for about 15 minutes before ultimately losing their 15th straight at Cameron Indoor Stadium — all by double figures.
Andre Dawkins added 17 points with four 3-pointers for Duke, which won its 29th straight home game — tied for the longest active streak in the nation with No. 3 Florida, which beat Missouri earlier Tuesday night.
Parker reached the 20-point mark for the 13th time and third time in ACC play.
Duke improved to 24-1 after a loss since the start of 2009-10, and was never really in danger of its first consecutive defeats since the 2012 ACC and NCAA tournaments.
The Blue Devils did it this time with defense, with pesky guard Tyler Thornton recording three of the team’s 10 steals — and receiving an enthusiastic high-five from Krzyzewski after deflecting another ball out of bounds.
“Tyler really played like a senior captain today,” Krzyzewski said. “He just set the tone for us. He’s been that kind of guy for his whole four years, and hopefully now, as we’re entering the last stages of these seniors’ careers, they step it up even more.”
Duke scored 26 points off all those Wake Forest giveaways.
Arnaud William Adala Moto had 10 points and 10 rebounds, and freshman Miles Overton had a season-high 12 points for the Demon Deacons, who fell to 2-28 in ACC road games in Bzdelik’s fourth year.
Miller-McIntyre, who averages 14.4 points, was in uniform on the bench but was unable to play after spraining his ankle three days earlier against Georgia Tech.
Bzdelik said the team’s medical staff told him Tuesday morning that, “Hey, we’re not going to do this.”
“It’s too tender, and he would not have been effective,” Bzdelik said. “We didn’t want a setback, obviously, with a lot of basketball left to be played.”
Even without him, Wake Forest managed to keep this one competitive for a little while.
And then it got out of hand in a hurry.
Duke held Wake Forest without a field goal for more than 7 minutes late in the first half and used an 18-1 run to first take the lead for good, then push it well into double figures.
“It took us a while to get going, especially me, defensively,” Parker said. “We didn’t do a good job of defending the post, and it really did show. … The second part of the first half, we really got through it, started to play defense and picked it up.”
The Blue Devils — who shoot 3-pointers at an ACC-leading 41 percent clip — hit four 3s in roughly 31/2 minutes during that run, including two by Rodney Hood about 30 seconds apart. Sulaimon closed the run by hitting from long range with about a minute left before the break to make it 44-29.