Heels move to .500 in ACC play with convincing win against State 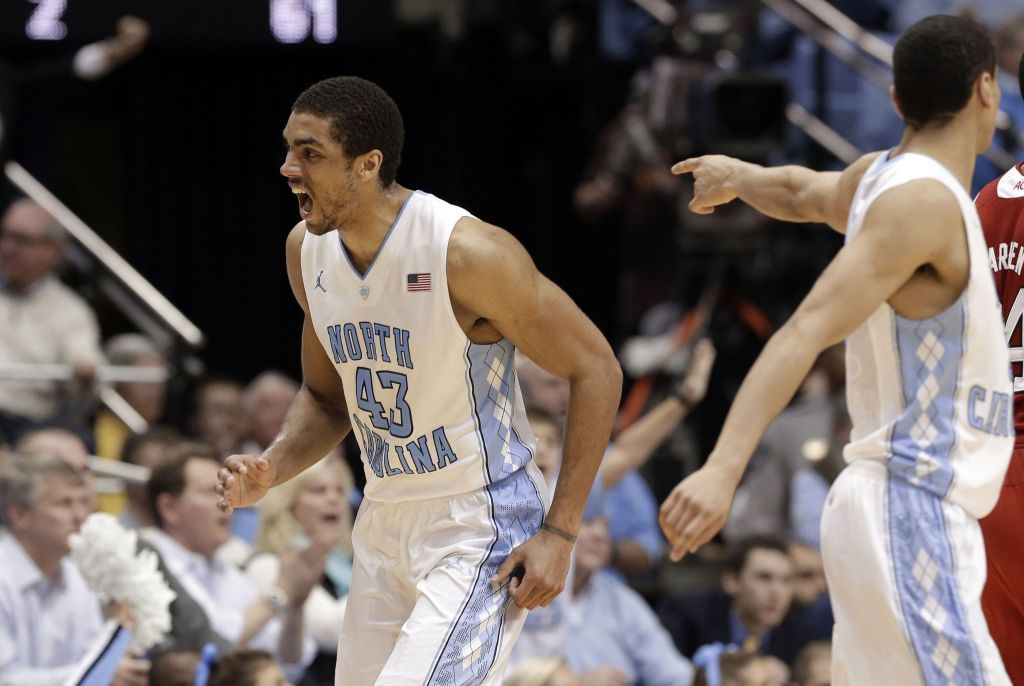 CHAPEL HILL — North Carolina has fought back from a bad start in Atlantic Coast Conference play to even its record. Capping that climb by extending rival North Carolina State’s misery here made that even sweeter.
James Michael McAdoo had 16 points and 13 rebounds to help the Tar Heels beat the Wolfpack 84-70 on Saturday, their 11th straight win against N.C. State at home.
North Carolina stood at 0-3 after a loss at unbeaten Syracuse and 1-4 after last week’s loss at Virginia, but the Tar Heels have won three times in the past week to put themselves in the middle of the league standings.
“I think it does say something about the kind of kids we have,” coach Roy Williams said. “When we were 0-3 or 1-4, our kids stuck with it and tried to do what we ask them to do every day in practice. They’ve worked hard.
“I really believe we’re getting better as a team. I told them that this week: I think we’re really close to really becoming a good basketball team.”
Leslie McDonald scored a season-high 20 points for UNC (14-7, 4-4 ACC), which jumped to an 18-4 lead and led by 17 at halftime to keep Williams unbeaten at home against the Wolfpack (14-8, 4-5) since returning to his alma mater in 2003.
North Carolina led by 22 in the second half, never let N.C. State closer than 10 and finished with its best scoring output in an ACC game this year.
“It always helps to have a lead where you have that little bit of cushion,” McAdoo said. “But definitely just getting that lead was emphasized coming into the game, that we had to hit them in the mouth really quick. … So we definitely wanted to just try and take as much confidence away from them as possible.”
The Tar Heels have won 21 of 23 meetings against the Wolfpack under Williams. N.C. State hasn’t been closer than nine points in the past 10 meetings at the Smith Center in a rivalry that means a lot to Williams as a UNC alum and former assistant to Dean Smith.
“It’s just a different level of energy and anticipation for this game,” said sophomore Marcus Paige, who scored 15. “And the coaches make it clear that they really want to get these wins.”
T.J. Warren scored 21 to lead the Wolfpack, who had won three straight — the past two by a combined six points — to build some momentum. But N.C. State didn’t do much to reverse its long-running struggles in Chapel Hill, going 10-for-40 (25 percent) in the opening half to trail 40-23.
N.C. State shot 65 percent (17-for-26) after halftime to make things more interesting and finished the game at 41 percent, but it never recovered from its bad start.
Coach Mark Gottfried said he thought his team was “dazed” during the first half, which included a 2-for-7 showing at the foul line.
“I did like the fact we came out to start the half and we had great competitive spirit,” Gottfried said. “Like I said though, you’re in too big of a hole at that point to overcome it.”
The Tar Heels shot just 41 percent and finished with a 52-36 rebounding advantage, including a 22-12 edge on the offensive glass that led to 20 second-chance points — though they blew plenty of in-close looks and finished just 17-for-45 on shots in the paint.
UNC made 25 of 33 free throws for the game, including 15 of 17 after halftime in one of its steadiest showings at the line.
Warren, the ACC’s leading scorer at about 22 points, scored with 90 seconds left cut the deficit to 76-66, but the Wolfpack got no closer
“We played well as a team in the second half,” said Desmond Lee, who scored all 18 of his points after halftime. “We defended, we were talking. I just wish we could have done that in the first half.”