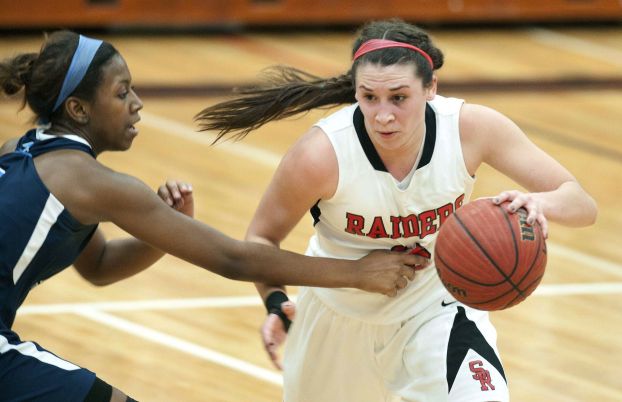 LANDIS — Avery Locklear and Khaila Hall have been playing basketball together since they were kids.
Now as the leaders of their respective high school teams, the longtime friends squared off Friday night in Landis.
Locklear’s Raiders got the best of Hall’s Falcons, riding a big first-half lead to a 52-44 victory.
“I’ve known Khaila Hall almost my entire life. We used to play AAU together when we were little,” Locklear said. “The whole time out there, she would block me and I’m like ‘Dang, Khaila, that’s a good block.’ But if I steal the ball from her, she’s like ‘Good hands.’ So it’s back-and-forth and we’re really good friends.”
The pair battled back-and-forth throughout, matching each other point-for-point in the first half.
Locklear scored six points in the first quarter as South jumped out to a 13-10 advantage.
Hall answered with a three-point play to open the second as the Falcons took the lead on a Shanice Miller bucket.
Locklear responded with a layup, while Kayla McClendon scored five straight to put the Raiders back in front. South took a 30-23 lead into the locker room.
West made a run coming out of the break, but Locklear tallied all nine of the Raiders’ points in the third quarter, part of 15 straight for the junior.
“I just knew that we needed the points to get ahead,” she explained. “I’ve played with Khaila for years. Knowing her as a player, I know she can also do the same. I knew that we had to lengthen our lead.”
Cassidy Chipman sealed the 52-44 victory for the Raiders with a three-point play with 53 seconds left.
“It was ugly,” South coach Jarrod Smith said. “In the past, we’ve played ugly games and it would cost us, so it’s good to overcome an ugly game and win a game that we have to have. If we want a shot at winning this thing, we pretty much have to win out.
“I’m trying to find positives, but I don’t have a lot.”
South head coach Ashley Poole also struggled to find many positives.
“Once again, I felt like we put ourselves in a position to win a game and just didn’t finish,” she said. “We have spurts of intensity, but we just don’t finish. It’s frustrating.
“It was one of those nights,” she added.
Locklear netted 26 points with nine rebounds to lead all scorers, while Hall powered West with 18 points, nine boards and five blocks.
South remains in the race for the SPC title with the win, improving to 5-3 in league play.