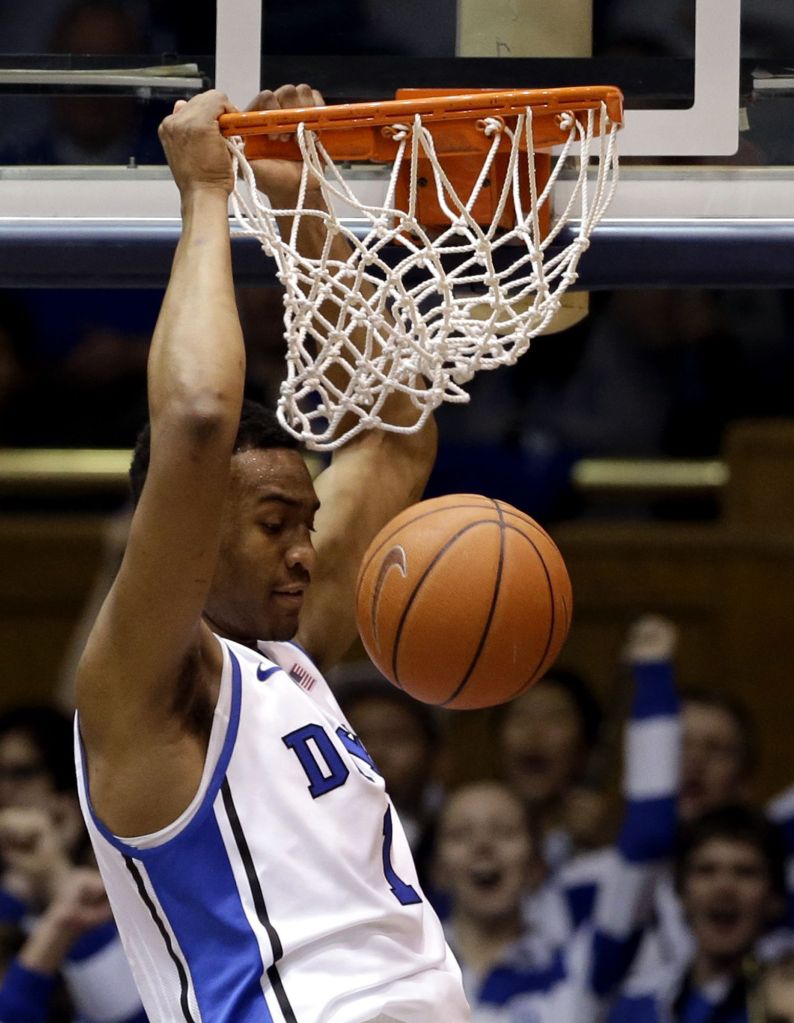 DURHAM — Duke’s defense kept harassing North Carolina State’s ball handlers, forcing the Wolfpack into an endless series of turnovers that helped the 23rd-ranked Blue Devils cruise to a dominating home win.
Freshman Jabari Parker had 23 points and Duke scored 33 points off turnovers in Saturday’s 95-60 win, a performance coach Mike Krzyzewski said was the team’s best effort of the season.
Rasheed Sulaimon added 13 points for the Blue Devils (14-4, 3-2 Atlantic Coast Conference), who led by 13 points at halftime and by 37 afterward to keep the Wolfpack winless at Cameron Indoor Stadium since 1995.
With former President George H.W. Bush in attendance in Duke’s famed home arena, Duke shot 50 percent and went 11 for 24 from 3-point range to earn its most lopsided win against its Triangle rival in a dozen years.
“Actually everything today was really good,” Krzyzewski said. “Our team was outstanding.”
N.C. State (11-7, 1-4) shot 48 percent but committed 21 turnovers to undermine any chance at building momentum.
Fifteen of those turnovers came by halftime, with Duke taking a 23-2 edge in points off turnovers to build a 45-32 lead. Things only got worse from there for N.C. State, which hasn’t beaten Krzyzewski at Cameron — the 1995 win came while Krzyzewski was on medical leave — since February 1988.
It was Krzyzewski’s 200th career ACC win at Cameron and his 898th overall at Duke, putting the NCAA men’s career coaching wins leader two shy of joining Syracuse’s Jim Boeheim with at least 900 wins at one school.
Bush sat in the second row of seats along the baseline nearest the Duke bench. The Bush-founded CEO Roundtable on Cancer saying Bush was on hand to recognize Krzyzewski for his “personal commitment and leadership” in work to fight cancer.
Bush met with Krzyzewski and his team in the locker room afterward.
“I didn’t know Coach K and him were great friends,” point guard Quinn Cook said. “They talked about their relationship and stuff. You don’t sign up for stuff like this. You meet the president, it’s just a blessing, man.”
Duke started the week by falling to its lowest ranking since the last time it fell out of the AP Top 25 in February 2007, then needed Sulaimon to make a 3 that bounced high off the rim and dropped through the net in the final minute to hold off Virginia 69-65 here Monday night.
The Blue Devils had no such drama Saturday, easily handling an N.C. State team that didn’t have any player reach double figures to support T.J. Warren — the ACC’s leading scorer at 22 points per game.
Krzyzewski stayed with his deeper rotation with 10 players playing at least 10 minutes. That helped lead to plenty of balance, with Rodney Hood and Andre Dawkins each scoring 11 and Cook with 10.
They all took advantage of the Wolfpack’s mistakes. N.C. State was within 15 points midway through the second half when Duke finally blew the game open, with Amile Jefferson scoring a three-point play then Dawkins burying a 3 following a turnover to make it 62-41 with 121/2 minutes left.
“We get going in Cameron and the crowd’s behind us, we just feel like everything is going to go in,” Dawkins said. “And it eliminates tired for us on defense. Tired goes out the window because the fans and your teammates are giving you all that extra energy. So it’s fun when we can do that.”
It was N.C. State’s worst loss to Duke since a 108-71 loss here in February 2002.
Warren finished with 23 points on 9-for-19 shooting with eight rebounds. But the Wolfpack’s 21 turnovers were a season-high, easily surpassing the previous total of 16.
“The pressure was pretty hard,” Warren said. “Our guards couldn’t get into a rhythm. That’s the main thing. Our guards have got to take care of the basketball, and our wings have got to do a better job of getting open, including myself.”
N.C. State has followed its win at Notre Dame with three straight losses, including a 31-point home loss to Virginia last weekend and a 70-69 loss at Wake Forest on a last-second basket Wednesday night.
“It ain’t fun,” N.C. State coach Mark Gottfried said. “But our group of guys — regardless of if we’re young, old, all those things — we’ve got to figure it out.”
The Wolfpack played without freshman forward Lennard Freeman, who sprained his left ankle in Friday’s practice.