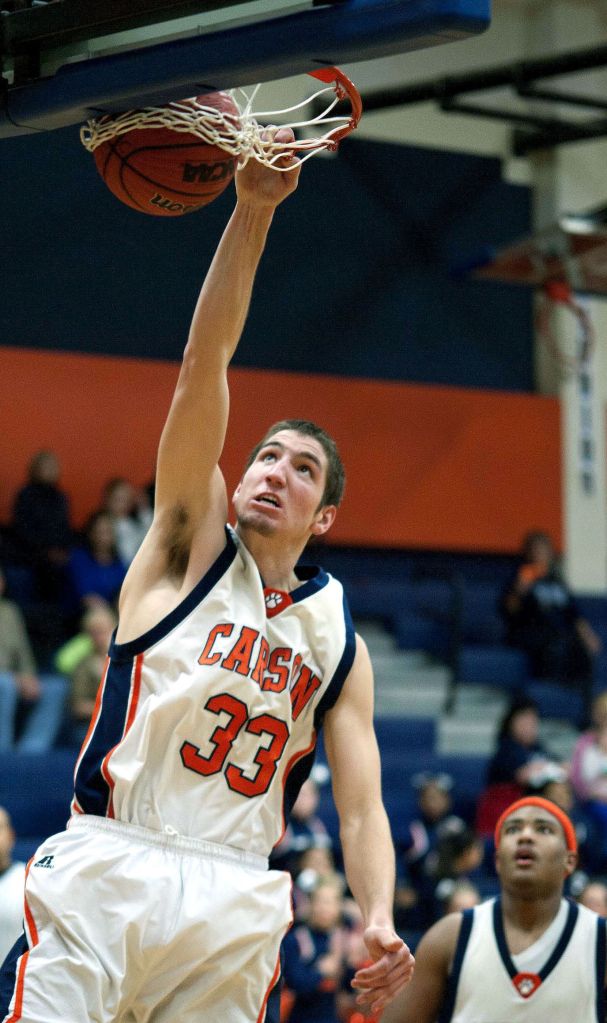 CHINA GROVE — Jacob Raper provided the spark, Tre Williams brought the lighter fluid and Colton Laws once again delivered the beef for Carson’s boys basketball team.
All that mid-winter heat helped the Cougars barbecue visiting Central Cabarrus 80-67 Friday night.
“We had a tough loss last Friday and it’s been a long week getting ready to play again,” coach Brian Perry said after the up-and-down Cougars (10-6) improved to 5-4 in SPC play. “So to come out and not have any hangover or lingering problems was good for our kids and good for our coaches.”
Carson knocked down eight 3-pointers — including seven in the first half — and showed no ill-effects from last week’s one-point loss to Cox Mill.
“We didn’t want to keep that on our shoulders too long,” Laws said. “But we wanted to remember it.”
Raper, a 5-foot-9 junior guard, made it seem like a distant memory when he burried four home run balls in the first quarter. Laws added eight of his team-high 18 points as Carson raced to a 25-15 lead.
“We know what time it is,” said Williams, the senior marksman. “It’s crunch time. This is the second time around (the conference). If you want to have a run, this is the time to do it.”
No one knows that better than Perry, who expected a bare-knuckles fight from the Vikings (6-10. 2-6).
“They were a hot team,” he said. “I know they won their last two conference games and may have won something like five in a row. I knew it would be a battle, but we made the plays to hang on and get the win.”
Carson’s Armoni Hogue and Jonathan Rucker sank 3-balls in the second quarter as the Cougars nourished their lead to 33-15. They held their widest margin after Williams completed a three-point play that made it 42-21 with 1:01 remaining in the half.
“We did a lot of drive-and-kicks,” Williams said after contributing 16 points. “When you do it right it makes your shooting percentage go up.”
Central coach Kenyan Weaks felt Carson’s accuracy from long range was pivotal.
“I thought they did it up on the three-point line,” he said. “That got their confidence up. We were hoping they weren’t going to keep it up all night.”
Carson didn’t, but its lead never fell below 11 points. When Central’s Lavon Hightower converted a 3-ball from the right side with 3:16 remaining in the third period, the guests had inched within 55-43. It was back to a 15-point edge when Weaks was called for a late technical foul and Williams sank the second of two free throws.
Then in the fourth quarter — when Central drew as close as 71-60 on Mason Hartsell’s dribble-drive layup with 2:34 to go — Carson kept its composure. The Cougars hit seven of 10 free throws in the final two-and-a-half minutes to salt the game away.
“That was a key,” said Williams. “Even if we were messing up on open shots, we never let them make a run. We just had to come together and finish the game.”
In hindsight, the game have been finished early. Raper, who finished with a season-best 14 points, made sure of that with a spectacular first-quarter display.
“Raper has a game like this about every year,” Laws said in his biscuits-and-gravy drawl. “It gets everyone going.”
Did it ever. Perry revealed afterward that he wasn’t a bit surprised.
“Jacob Raper — that’s what we expect out of him,” the coach said. “He’s one of our best shooters, even if he hasn’t shot it real well consistently through the year. But every time he shoots it you’ve got to feel like it’s going in.
“The first quarter tonight is what I saw from him this summer,” Perry continued. “And what I’m hoping to see more of throughout the second half (of the season). We need that dimension.”
The third and fourth quarters resembled an old-fashioned, after-school street fight. “Both teams were fighting hard,” Weaks said. “That’s the way we are. If we lose we’re going down swinging.”
•