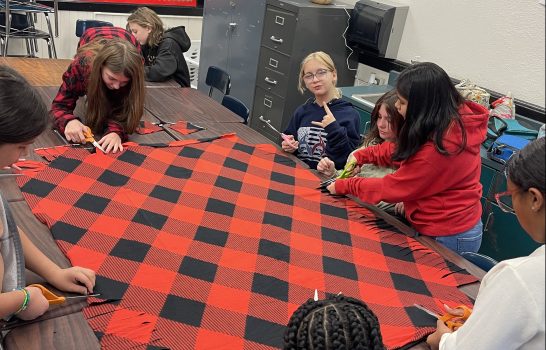 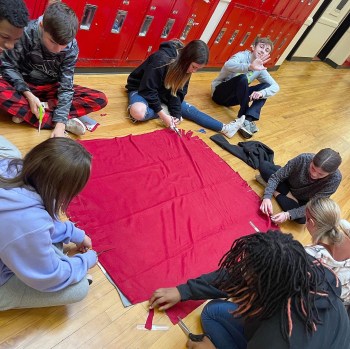 China Grove Community Service Club members explore ways that they can help out those who are less fortunate than they are. - Submitted 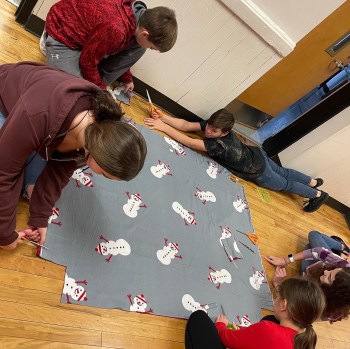 Many of the blankets that the China Grove Middle School Community Service Club made featured child-friendly designs like snowmen. - Submitted 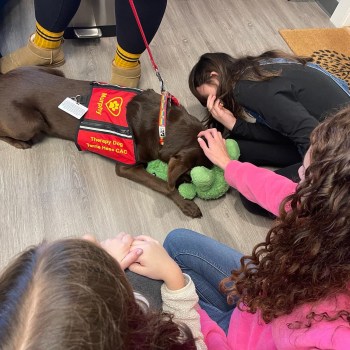 The Terrie Hess Child Advocacy Center therapy dog Murphy provided a little reprieve for the students on their recent trip to the nonproft. - Submitted

SALISBURY — Students in China Grove Middle School’s community service club got a first-hand glimpse at outreach during a recent visit to a child advocacy center.

Not only did the students learn about the plight some children their age are facing, but they also learned about themselves in the process.

The club, which was made up of students ranging from sixth-eighth grade, crafted fleece blankets to donate to the Terrie Hess Child Advocacy Center, a center that provides a friendly environment where child victims of sexual and physical abuse and their non-offending caregivers receive forensic interviewing, victim advocacy, medical evaluation, and mental health intervention services.

“It was exciting to go to the (Terrie Hess Child Advocacy Center) and give to people who deserve a little more than they have,” said seventh grader Matthew Rohl.

Rohl indicated that his eyes were opened by being in the community service club.

“I took this club thinking it was whatever, but I had some fun doing it,” Rohl said. “I might even do something like this on my own.”

Giving back to his hometown is just something that Rohl said you do when you grow up in a place.

“It’s a small town,” Rohl said. “I feel like you can walk down the street and find somebody you know. We are all giving to each other in that process. Giving more is just another part of it.”

“We heard them talk about other people’s problems, and they made me feel like my own weren’t that bad,” Tyler said. “We learned about kids in dangerous situations and some who had been hurt.”

Tyler said she liked knowing what she was doing was going to help somebody in need.

“I learned that I really like helping people,” Perkins said.

Perkins indicated that she thinks everyone should put themselves into the position of others from time to time.

“I think that there are a lot of people who are born in really good situations, who never have to worry or consider where other people are because all they know is themselves,” Perkins said. “I think that opening your eyes and really putting yourself into the shoes of others who aren’t doing so well is kind of like, if I was in this situation, how would I want someone to treat me, so you treat them that way.”

China Grove Middle teacher Heather Lowe, serves as one of the community service club instructors. She explained that the club’s goals align with the school’s values.

“Our three main values are innovation, exploration and community service,” Lowe said. “At China Grove, our purpose of clubs is to have students explore different career opportunities. The way that we did the service was through this club.”

With hope, Lowe believes that some of the students might be led to a career in a community-service-related field.

“We want to explain to the kid that it’s not just about raising money for something, picking up trash on the side of the road, or donating to a food drive,” Lowe said. “You can actually have a job in community service.”

Deciding to make blankets for the Terrie Hess Child Advocacy Center, resulted from a phone call to the organization.

“When we started the club, we called them and said, how can we help,” Lowe said. “We told them one option is coming and talking about what you guys do, or we could do a project for you. They told us that every kid who comes in, whether they are itty bitty to 18-year-olds, loves getting blankets while they are there.”

China Grove Middle English and language arts teacher Kim Walton is also a community service club instructor. She indicated that the club got most of the material for the blankets from the JoAnn store.

“Each club has a budget,” Walton said. “Our budget was approved, and it went toward the fleece.”

Walton indicated that the students who visited the Terrie Hess Child Advocacy Center were inquisitive.

“They asked great questions, like if you are a nonprofit, how do you get paid,” Walton said.

Whether the students make a career out of community service or not, they will always have the memories of when they did help out those who were less fortunate.

Although sixth grader Hayes Scott’s favorite part of the project was making the blankets, she knows now that she likes to help others.

“It was nice to give stuff to people who don’t have much,” Scott said.