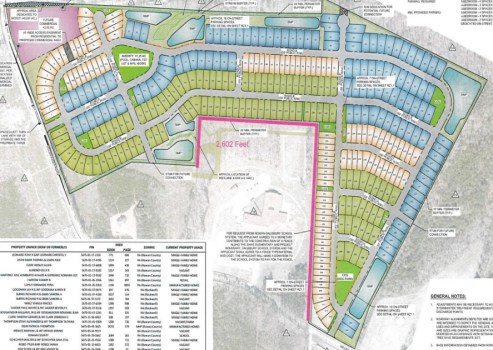 Rowan-Salisbury Schools Board of Education approved a contract with D.R. Horton to construct a security fence along the perimeter of school property that abuts a proposed subdivision called Sweetwater Village. - Submitted

ROCKWELL — A new subdivision projected to be constructed near Shive Elementary School presented a challenge for the Rowan-Salisbury Schools district due to its proximity to the school’s outer perimeter.

However, the solution was resolved during the most recent Board of Education meeting when the district formally approved an arrangement with the development contractor, D.R. Horton, to construct a fence at the school.

The agreement concerns Sweetwater Village, the proposed subdivision that will be next to school property. The 2,602-foot security perimeter fence will be funded by D.R. Horton.

The projected cost of the fence is approximately $118,000 and Rowan-Salisbury Schools will administer and oversee the fence’s installation, with funding allocated by D.R. Horton.

The recommendation from Superintendent Dr. Kelly Withers and RSS Chief Operating Officer Anthony Vann to the board was to accept the proposal in full. It was approved unanimously.