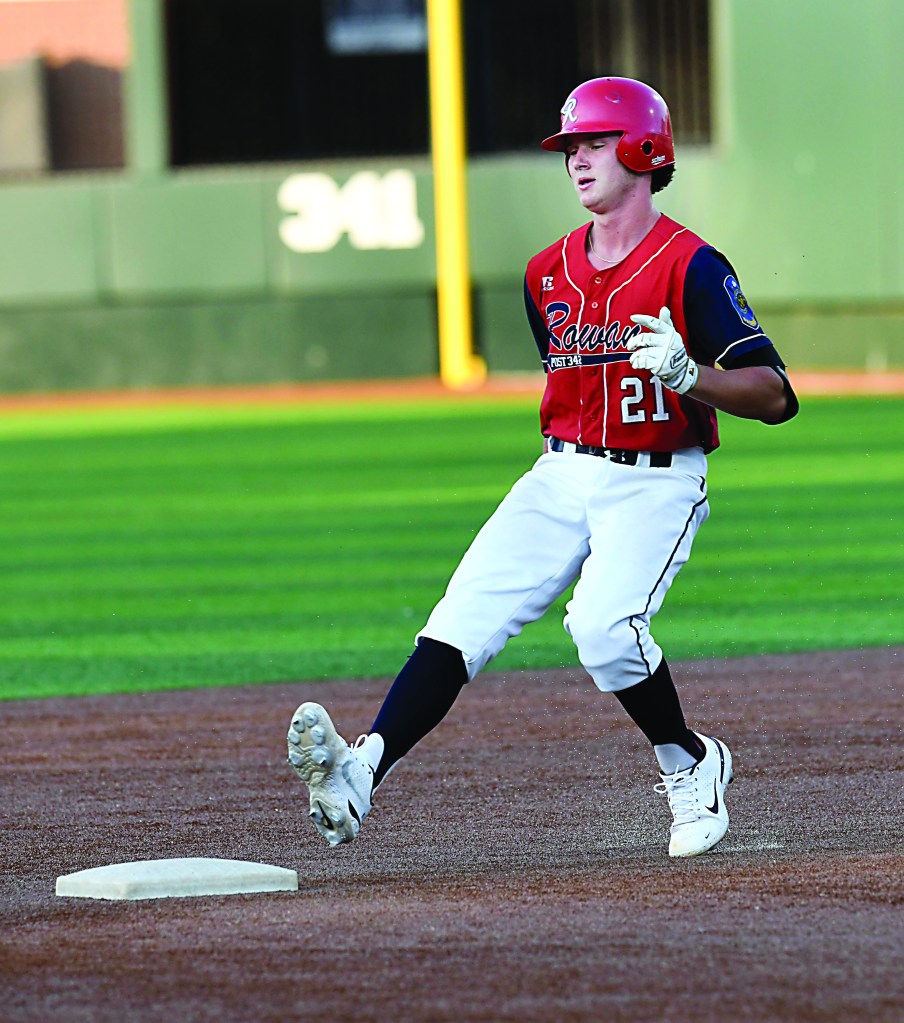 Blake Hill led the Rowan Legion team with 45 RBIs last season and that was good enough for coach Jim Gantt. File photo by Wayne Hinshaw, for the Salisbury Post

Let that sink in for a moment.

Three hits equaling one scholarship is math that may make Hill unique in the history of high school baseball, but the guy who made the college offer — Jim Gantt — knows what he’s doing and he believes in Hill.

Gantt not only coaches Catawba College, he coaches the Rowan County American Legion team, and Hill may have been a solid Legion team’s best offensive player in the summer of 2022. It was either Hill or Jackson Deal, who already had a college season under his belt.

Gantt put in a call to the right-handed thumper around Thanksgiving, shortly after Hill had finished his football season at East.

“He asked me what my plans were for college, and I told him I was hoping to find a place to play baseball,” Hill said. “Then he called back about a week later and said, ‘I’d really like for you to come play for Catawba.’  That call was the realization of a dream. I love the way he coaches, I love the baseball program, I love the ballpark, and I love the school.”

Don’t get the impression that East Rowan coach Brett Hatley isn’t a Hill fan. He definitely is.

Hill got some chances in the spring of 2022 — 28 plate appearances —  but he didn’t do enough to keep his bat in the lineup. He had three hits, three RBIs and struck out eight times.

East is a traditionally strong program, lots of talent, lots of options. If you start out in a slump, there’s a good chance it’s going to be next man up.

East (25-5) played a challenging early schedule, and it’s not easy to hit when the wind chill is 30 degrees in March. You play two or three games a week, facing No. 1 or No. 2 starters.

When Hill started cold and had to sit down and watch his teammates play, it hurt, but he cheered for them.

Some guys in his situation might have started looking around for a new school, but Hill is a Mustang through and through. His teammates are his best friends, the guys he grew up with.

He kept practicing, kept working, kept lifting weights. He was determined to be better the next time he got a shot.

“Blake is a very good player,” Hatley said. “But we had one of the best teams in the state. We had other good players ahead of him.”

Finally, it all came together for Hill last summer with the Rowan County American Legion team. The hot corner is his best position, and he turned into a very confident third baseman on that new turf at Newman Park, where you never get a bad hop.

Playing five or six nights a week with the Legion team, with weather in the 80s, he discovered a consistent stroke. He’s a strong young man at 6 feet and about 200 pounds, and while he only hit three homers, he sent ringing line drives all over the place. With every shot he hit, his confidence grew. Every time the crowd roared, his confidence grew some more.

He led the Legion team — by a lot — with 45 RBIs. He had a five-RBI game against always tough Randolph County. In the games against Mooresville, he did a pretty fair impression of Mike Trout.

“We kept putting in the work and we all kept getting better as individuals and coming together as a team,” Hill said. “What I want to do now is to help East Rowan the way I did the Legion team. I want to drive in runs and play a good third base and I want to help us have a great team.”

Baseball was Hill’s first love. After his first Tee-ball game at age 5, he knew that baseball was more fun than anything else.

When he was 7, Hill had former East head coach Brian Hightower instructing him, so he was getting some advanced training at a very young age.

Hill also has trained for football because he’s a pretty physical guy, and football players get to hit people. He usually played outside linebacker for East.

But when the top two running backs got hurt, the coaches came to Hill and told him he was moving to offense. East went 1-10, but in the one game that the Mustangs won, Hill rushed for more than 200 yards.

Hill played Legion ball in 2021 and made the final roster as a backup infielder. He didn’t play much that year, but it still was a positive learning experience for him.

Gantt was actually a little surprised when Hill showed up for the 2022 season. Most guys who sit for a summer in reserve roles don’t come back, but Hill is different. He is very serious about baseball.

In the summer of 2022, he made his year of Legion experience pay off in a big way.

“Blake has the all the tools to be good and he really wants to be good,” Gantt said. “You look at the body he’s got and the power he’s got, and he’s got a chance to excel down the road.”

So Hill heads into his senior season with a scholarship and filled with confidence like he’s never had before. He’s expected to be the starting third baseman, and he’s ready to hold the job this time.

“Blake has always had this fun personality, and he’s always been a fantastic teammate,” Hatley said. “He can play. His best baseball is still ahead of him.”