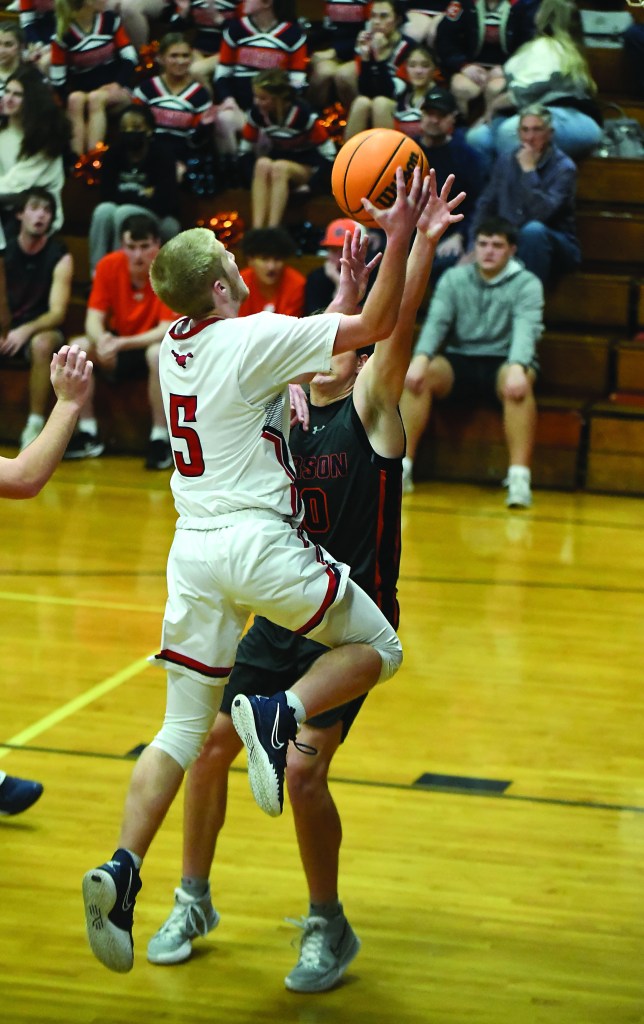 GRANITE QUARRY — With time running out in regulation, Tee Harris carefully maneuvered his way into the lane for a potential game-winning shot on Tuesday, but the hoop spit the ball back out.

Harris’ shot went halfway down, but  it was regurgitated and just wouldn’t fall at the end of regulation.

The Mustangs played hard enough and well enough to beat the tough Trojans, but they just didn’t. A signature South Piedmont Conference victory, a potential season-changer, was in the grasp of the Mustangs, but it slipped through their fingers at the foul line.

From start to finish, it was one of the more exciting games played in the county this season.

East lost 83-71 at Northwest Cabarrus (9-7, 7-2) despite a 31-point effort by Harris, but the Mustangs were confident they could score against the Trojans, who have earned a reputation as of the league’s best defensive teams.

The teams went to the fourth quarter tied 42-all.

Northwest led 50-45, but Dylan Valley got five quick ones for the Mustangs with a drive and a contested 3-pointer from the left corner.

One of Harris’ 14 rebounds was a critical stick-back for a one-point East lead in the final minute. Then Tijon Everhart made one of two free throws for a 57-55 East lead.

Northwest, which is tied for second with West Rowan, tied the game at 57-all with a very tough bucket that was scored over Harris inside. That set the stage for Harris’ last-second shot which went in and out.

Both teams played conservatively in the first overtime session. Harris saved the Mustangs at the end of it, coming out of nowhere to swat away what would have been a winning layup by the Trojans.

It was 60-all heading to the second OT. Northwest finally got control by scoring the first five points, and East couldn’t rally.

Valley scored 24 to lead East, as the senior guard continues a march toward 1,000 career points. Harris scored 18. Jonathan Wembolua’s 11 included a fast-break dunk after Harris went high for a defensive board and hit Valley with an outlet pass. Everhart contributed nine points.

The Falcons barely broke a sweat in the battle of short-handed teams. West physically overpowered the Raiders, at times, got to the rim frequently, and won 72-35.

It had been even more one-sided when the teams played in Mount Ulla — 75-12.

“This wasn’t good enough, but it was better,” South coach Daniel Blevins said.

For a while, it appeared the Raiders might get shut out.  South didn’t score the first six minutes, but got on the board with a layup off an inbounds play with 1:37 left in the first quarter.

West (11-6, 7-2) didn’t exactly light it up, but the Falcons got a jolt of energy late in the first quarter from reserves Tyrin Little and Deiondre Martin and took an 18-5 lead.

The Falcons, who are tied for second in the South Piedmont Conference with Northwest Cabarrus, stretched their comfortable lead to 41-13 at the half with a turnover-creating defense.

The Falcons went ahead 55-15 on a free throw with 2:25 left in the third quarter, but apparently no one noticed that the 40-point lead should have triggered a running clock.

Officials must have realized it at the quarter break, and a running clock was used in the fourth quarter to bring the game to a swift conclusion.

South made seven 3-pointers , but didn’t get a single point from the foul line. Grayson Cromer scored nine points. Drew Blackwell had seven.

Will Givens was accurate, as usual, for the Falcons and scored 20. He never really got hot, but he scored consistently in every quarter.

Athan Gill tried hard to turn the game into a dunk contest, with him as the only entry. He missed on numerous high-flying attempts, but he also threw several down. He scored an entertaining 14.

Emory Taylor got the Cougars started with a seven-point first quarter. Carson was even with the Knights after eight minutes.

Colin Ball scored nine in the second quarter to keep Carson in the game. LNC led 38-33 at the half, but Carson was still in good shape.

But then came the third quarter. Carson has plenty of shooters, but managed just four points in the period, as the home team pulled away.

“Just a really bad offensive quarter for us,” Carson coach Brian Perry said. “And Mikey Beasley was out with illness. That didn’t help.”

Isaiah Martino scored 27 for the Knights (9-9, 4-5), who are fifth in a pretty deep league. Charlie Fox made three 3-pointers and scored 16.

The Spiders suffered their third SPC loss — two have been to Central — and fell to fourth place.

Chase Daniel lit it up for six 3-pointers and 28 points, Carson Daniel had 13 points and 16 assists. Jaiden Thompson added 17 points.